Rain started when I got to Poipu. SUNNY Poipu!

So I put on my North Face rain slicker and walked down to the water. Waves. 2' to 3' was what the news said. Immediately I decided to stay in the shallower part for this swim. And I never changed that opinion.

What did change is the rain. It stopped, so I got into the Kiddie Pond. Me and no one else. YAY. Well, I should perhaps say that I waited until the other major occupant moved along to the island: 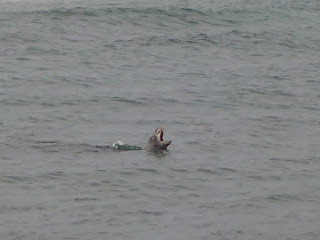 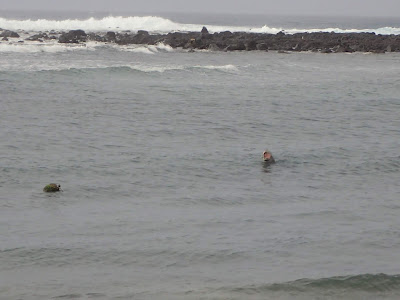 I think this is the same male seal that I see quite often. His mouth is open because he's barking. (Yes, seals bark too.)

He had been playing with the float you see to the left...It is attached to a chain and when they have the jetski in the water, that's what they hook it to. Recently, there hasn't been a jetski, so I'm hoping that means since the waves are somewhat calmer these days (it being winter on the south shore), they have decided they didn't need it. In any case, the seal eventually tired of playing on its own and went to the island for a nap. Hence, my ability to get in. (And just in case you might not know, it is illegal to harass or approach Monk Seals in Hawaii. They are actually federally protected. When I come upon them, as well as turtles, I swim the other way.)

There were 4 octopuses today, including the cute little one that I've seen before: 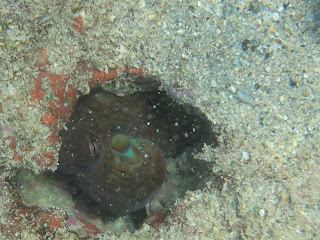 You can see its eye, siphon and body. It is sitting in a hole in the coral, and when I first saw it again today, it was blowing sand out of the den. Which you can see behind it in the following photo: 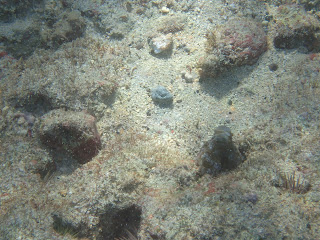 I enjoyed the circle just above its eye in this photo. The patterns are amazing. 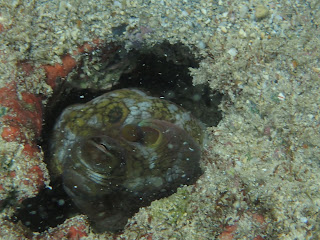 A closer photo of the octopus, which shows the sand it blew out of its den earlier. 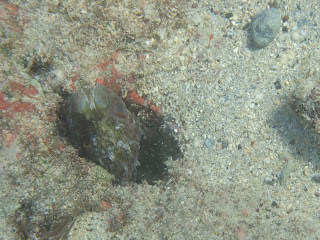 It was hiding so well that I had a bit of a hard time keeping track of it, so I focused on the urchins in the hole nearby...made a triangle. 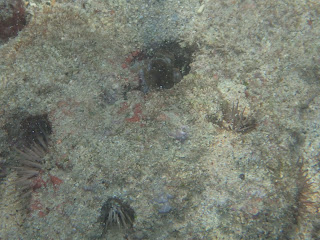 Below is what I first saw. I remembered this little guy and its habit of staying a bit above the rock that has its den, so I recognized the stance when I saw it again. The sand being blown out of the den was what first attracted my attention. It means something when blowing sand goes against the direction of the incoming waves. 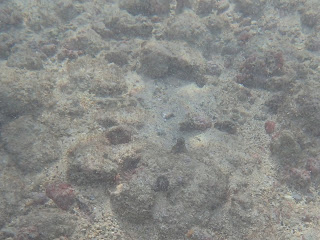 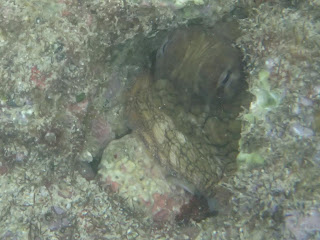 In this shot, the skin on its head is smooth. 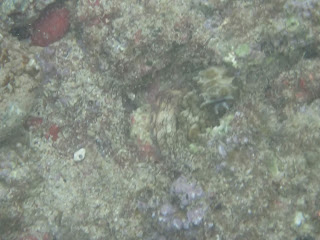 And here, a bit bumpy. The eye has radiating white lines from the center to the edge of its head. 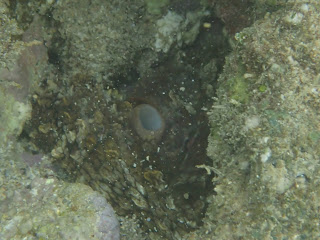 You can see how much bigger octopus #1 is than #3. 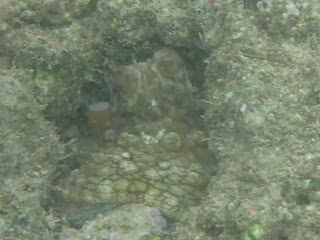 Kinda spooky isn't it? This is an extreme close-up....I was above the octopus, but not as close as this makes it appear. But you can see the eye against the dark skin. 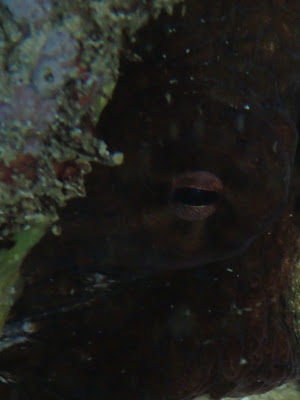 This has more light on the subject. What a difference the light makes, eh? 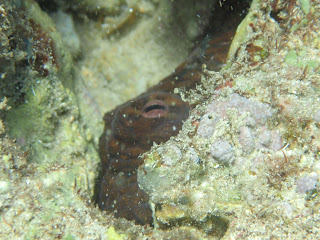 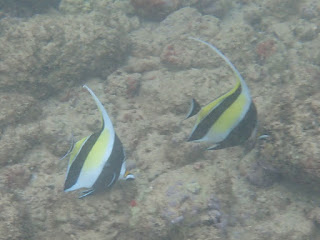 Two Moorish Idol. Lucky shot as they were headed the same direction. 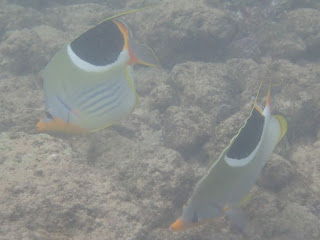 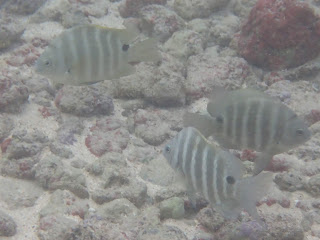 Abudefduf. My family recently thought, since I told them there was an error on my printed 2019 calendar of fish and octopus pictures, that the boo-boo was the name of these fish. Nope. They are really called that. 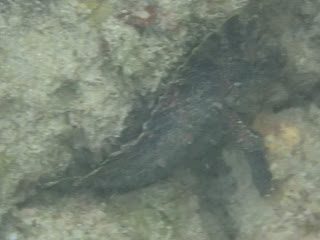 This was a surprise black Leaf Fish. Note the right fin leaning against the rock. They look rather like a dragon. The water quality was not the best, as I saw it early in the dive before the sun really came out from behind the clouds. 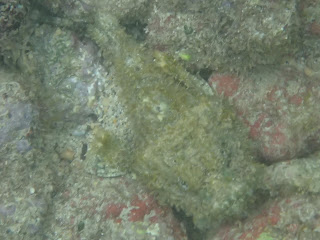 Quite happy with this sighting. As with the octopus above, it looks as if I'm closer than I really am. I have never had one of these fish dart at me, usually they try to escape my gaze, but I don't like to provoke them. 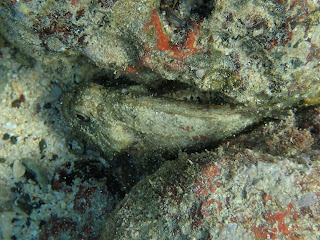 This Spotfin Scorpion fish was hiding between two rocks. They have red spots on their body and lips, but that wasn't evident in this photo. The eyes are the giveaway...to me, they look like black olive halves. 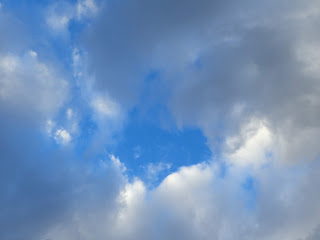 Yes, there is blue above the gray! 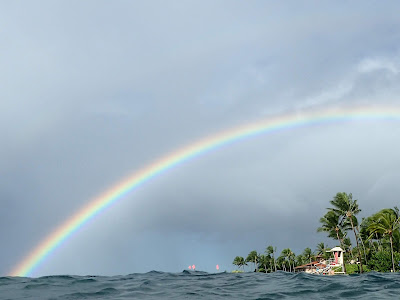 This rainbow was the absolute brightest I have seen in a long time. Really eye catching and lovely. 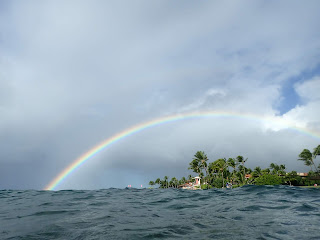 Cornet fish stopped by to peer at me. 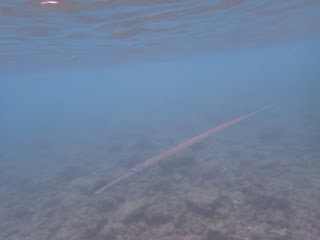 God's Rays for Perry. He always loved the light on the water.. 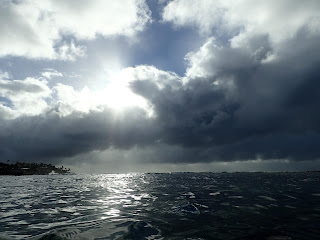 A cloud rainbow, this taken before the really bright one I saw later. 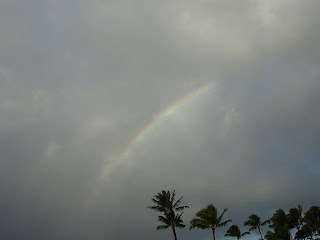 Deciding to go in....4 signs is usually my limit! There were no No Swimming signs in the Kiddie pond, so that's where I went in. This is where the Kiddie Pond and the deep side converge. 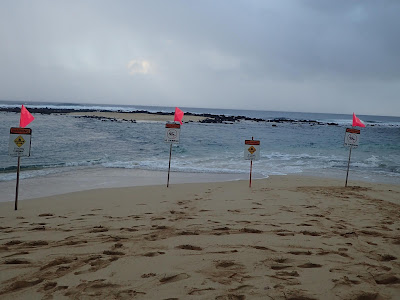 Sunrise, just after the dumping rain. 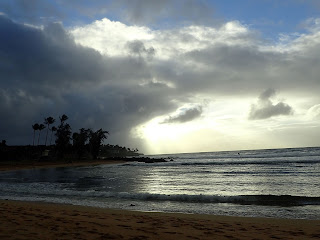 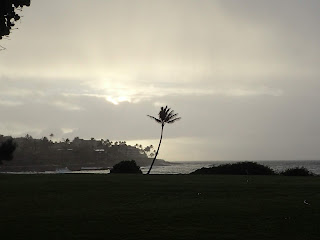 And one of my favorite shells: the Turban shell! I didn't pick it up, as it was nestled in a dent in the rock, but I am betting it still had the original animal inside. This one is covered in ocean gunk, but the "normal" cleaned off ones are really pretty. It does curve like a turban. And it has the operculum to guard its door...these are the same ones I collect when they are on the ocean floor, without their shells. 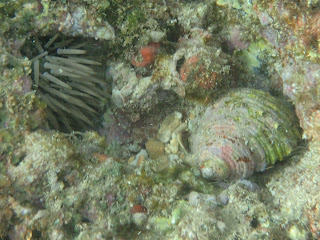 So from a rainy morning, nice things emerged. Thankful am I!