Return of the Frogfish! Oh and an octopus.... 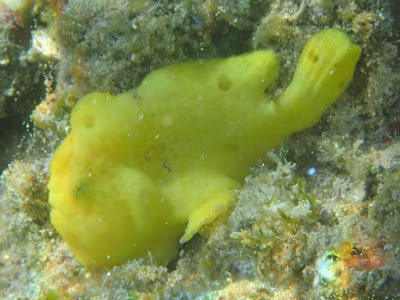 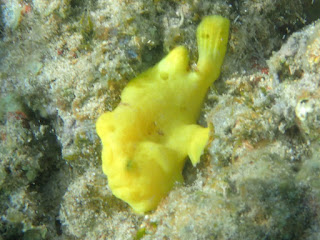 Looks like it's standing on its nose almost! You can see its eye a bit in these photos (on the left on the head) I was quite happy to catch a picture of this little guy again, as the King Tides had gone down and I was able to really get out there..... 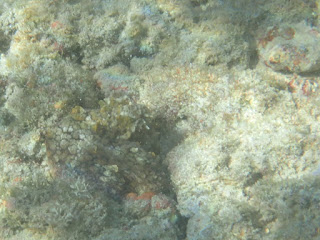 Various different poses from my one octo-sighting.: 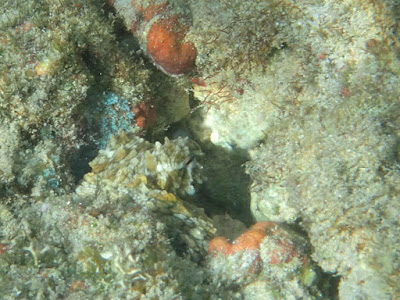 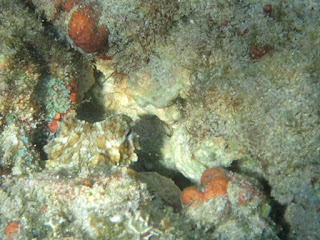 And then it was brown. Also showing a bit of the siphon. 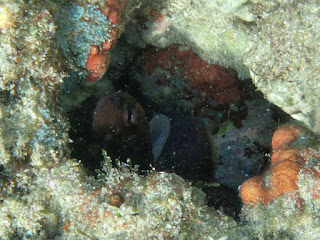 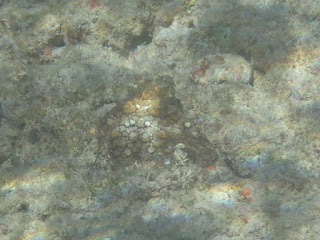 Still watching me. I would NEVER hurt or hunt an octopus!! 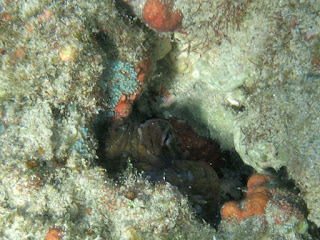 This octopus is becoming a regular, although I hesitate to name it that, as once I call them a regular, they tend to disappear! 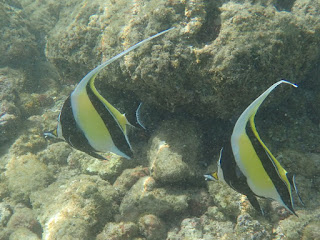 Two Moorish idols...going the same way, for once! 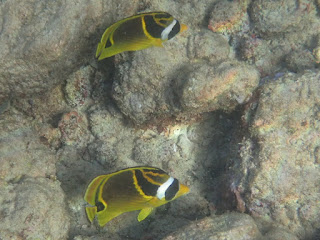 Ditto for the Raccoon Butterfly fish 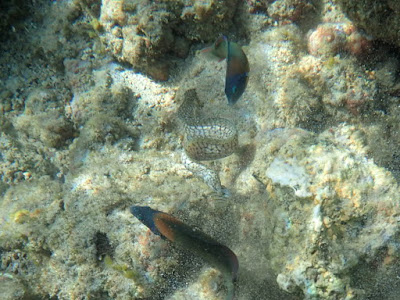 I haven't seen this before: I don't know if the Saddle Wrasses were chasing the eel or vice versa, but they were mixing it up! At one point the eel had the Saddle's nose in its jaws. A better camera person might have caught it on video, but it happened so fast... 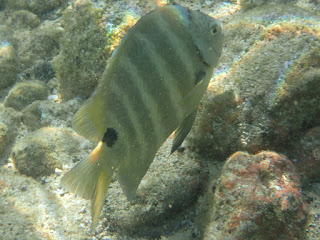 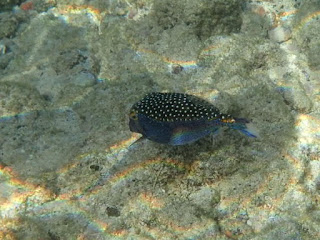 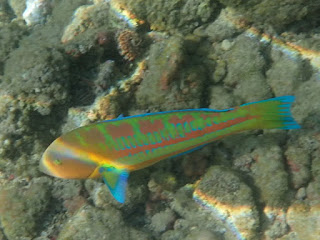 This Christmas Wrasse wanted no part of standing around for a photo... 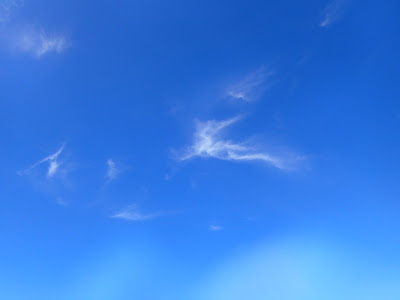 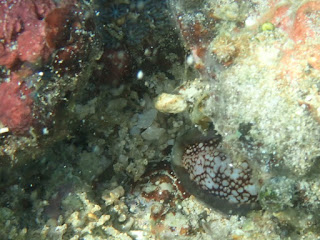 Snakeshead Cowry hiding under a rock 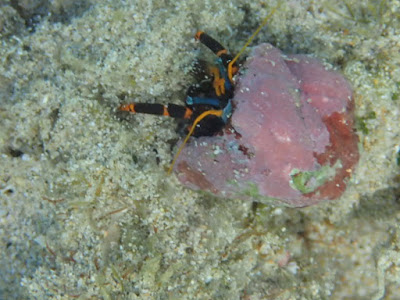 This Electric Blue crab was dragging its shell all along the top of a rock. 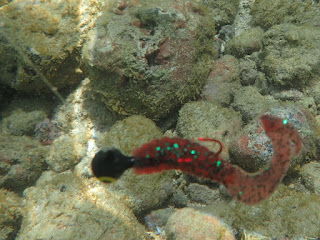 Bad, bad fisherman! Look at that hook! I was able to get the line and the lure and the hook safely out of the water. Just another reason not to walk on the bottom! Especially barefoot! 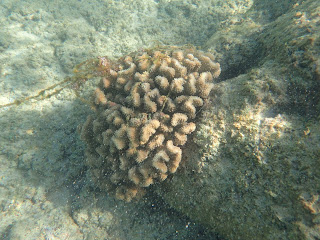 Sad fishing line all over coral head. I was able to get most of it out with the handy/dandy scissors my sweetheart bought for me. Thanks, Alex! 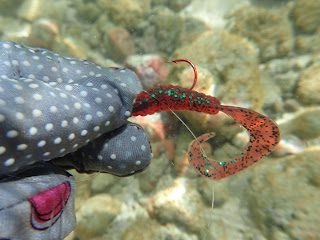 More of the lure. And hook. 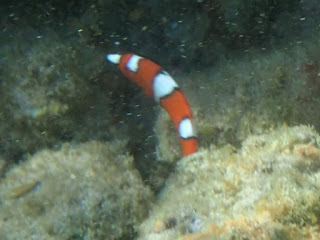 Juvenile Yellow Tail Coris. (Which has absolutely no yellow until it's older.) 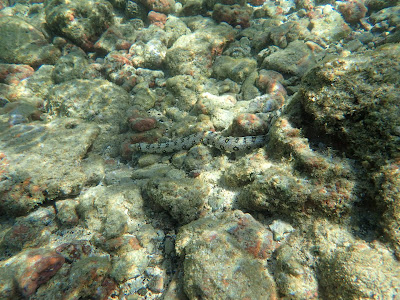 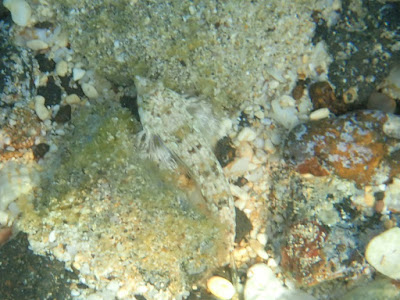 Tiny fish. Colored pretty much like the sand. Maybe an inch long. 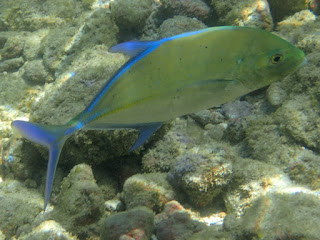 My husband had asked if I ever see small trevally. Yup! 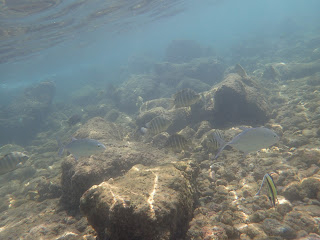 And a nice find: the Turban shell with operculum still in it. I did leave it there. I thought the rainbow colors on the bottom was a nice touch. Note that some of the outward shell has been flaked off by something.. 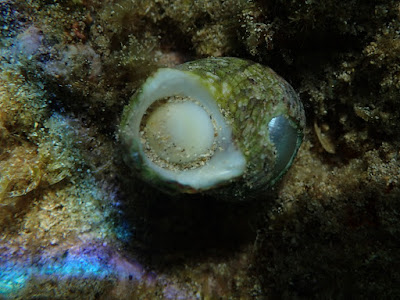 Another eel. This is the one that was boxing with the Saddle wrasses above. 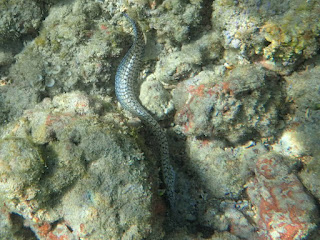 Waves underwater. With my dive glove and watch.. 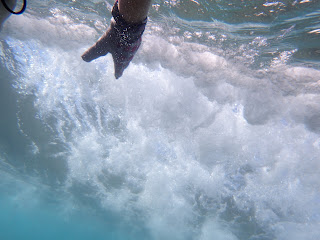 A very nice swim, with octopus and frogfish. Always a treat. It was also a treat not to be slammed by big waves.