5 octopuses and a nice talk

If you've been reading my blog for long, you'll already know that sometimes I get a bit strong when telling people to not hurt the seals and turtles. I also usually ask, hopefully, that they'll stay out of the "deep end" due to the rip currents. Today, two nice couples asked me, while standing an appropriate amount away from the seal snoozing on the beach, whether it would be ok to go in the deep end.

I asked their skill level. No skills, replied one spouse. So I said, the shallower (kiddy pond) would be better. I could see in her husband's eyes that he wasn't a fan of that answer, so he said, well, what if we have some skills? :)

I said, not to be sexist, but I can see by the gleam in your eye, that you want to scale that mountain! I explained about the rip current and showed them the hotel beach they would end up at if they were swept away. I added that this beach is one of the beaches on the island where people routinely drown. And then I said the Lifeguards arrive at 9! They expressed surprise that people drown here, so I told them that they could see all the same animals in the shallower pond,  but they would usually just be somewhat smaller. They seemed ok with that information.

I didn't follow their progress, but stepped carefully around them and the seal, wishing them a good swim and to please be careful. One does what one can.

All that said, I saw 5 octopuses and a Devil Scorpion Fish! 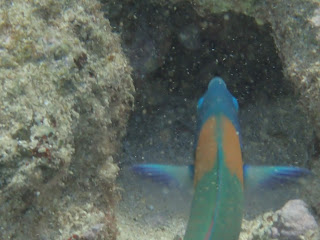 The Saddle wrasse was directly looking in at the octopus. It's funny that they think the hole might be someplace they would want to enter, but upon trying, they immediately recognize that the den is occupied. And they turn around. 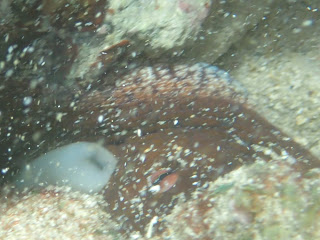 
This octopus is doing what they do: peeking over the rock to see if you are gone. 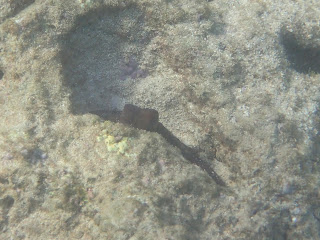 Below is one of my now "regular" octopuses. At first, I was sad to learn it wasn't at home in its den. Then I looked to the left and was surprised to see it fully out, on the ocean floor and searching for food. It was moving its tentacles underneath feeling around for prey. Which I never see, as they move prey immediately to their beak, which is underneath the animal. 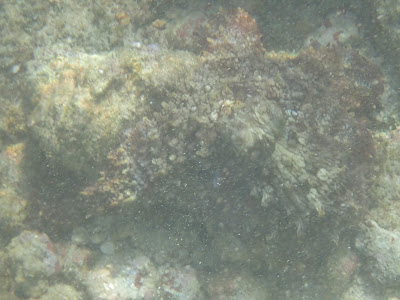 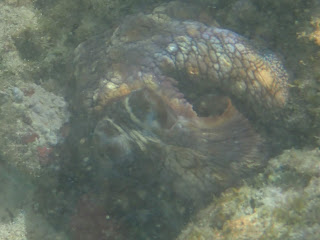 See how spiky they can make their skin? 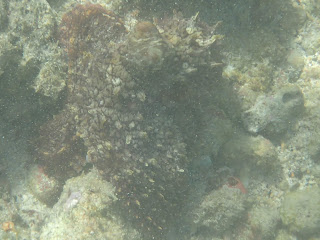 The aqua color at the base of the siphon is a neat color. This octopus I spied just as I was turning away from an oncoming wave. 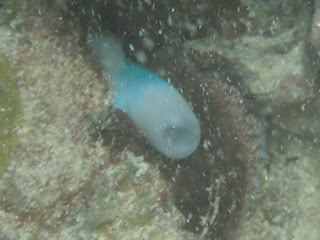 A tiny Humu, about to hide. Apparently, I am large and intimidating, even when I try not to be. 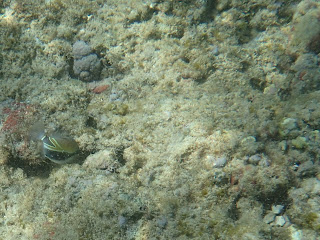 When you see one of these 4-spot butterfly, you automatically look around for its better half. They almost always travel in pairs. (Raccoon Butterfly fish do too.) 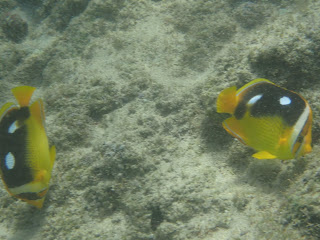 Start looking at the bottom, with the white spiky things. Then look up...the animal, which covers itself in rocks, goes all the way to the top of the photo. Great camouflage, right? 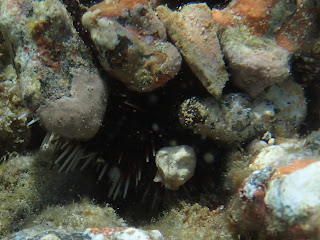 Just one of the many reasons not to walk on the bottom. Spines are ouch-y. 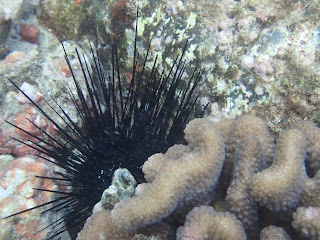 And here's another reason: the Devil Scorpion fish! The orange and yellow is on the inside of their fins. The tail is directly underneath, just a bit to the right. 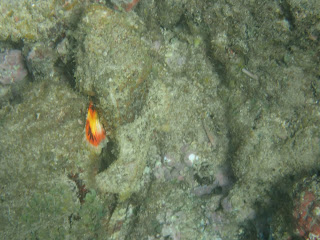 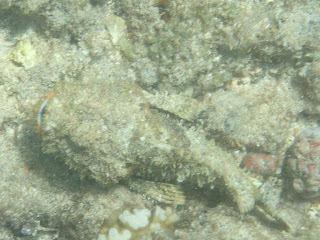 Mouth slightly agape (on the left), as it tried to decide what to do with me...or rather, without me. 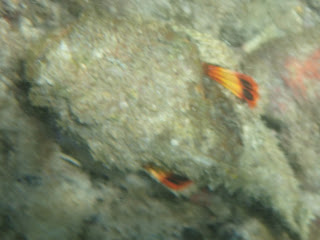 Bad photo, but you can see both orange and yellow side fins. 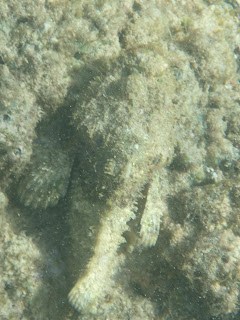 Before it moved, would you have seen it? I might have, but I had the luxury of seeing it move out of the corner of my eye. 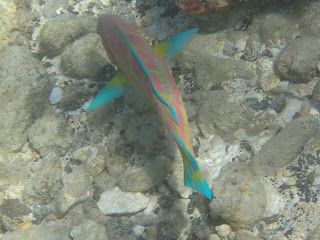 It is funny: once I had decided that I would never get another good photo of the Christmas Wrasse, because they are so quickly out of the scene, today, they seemed to go more slowly. "I'm ready for my close-up, Mr. Demille!" (Quote contributed by my sweetheart.) 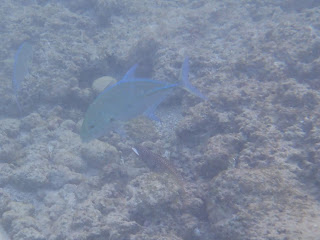 Two trevally were harassing an eel. (Look for the small bit of white in its open mouth.) I think they try to steal eel food, or perhaps just other food that runs away from the eel.) 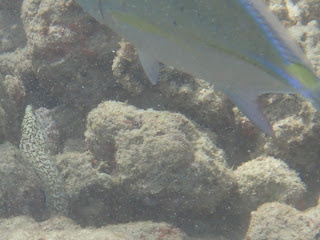 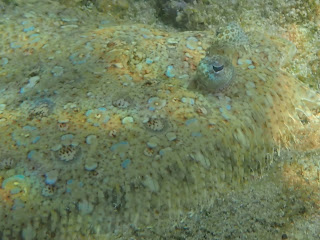 And one of the highlights: Peacock Flounder! 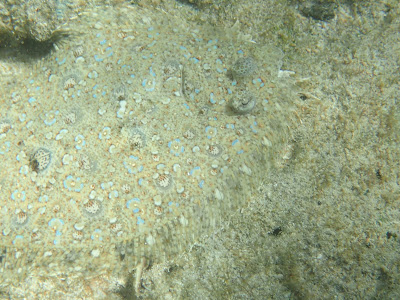 You can see its eyes. 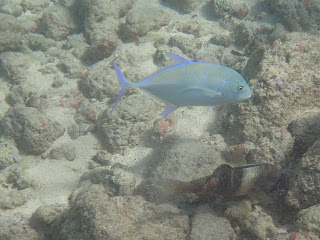 This Trevally was hunting with a goatfish. As with the eel, I think they live in hope that they'll catch something the goatfish misses. 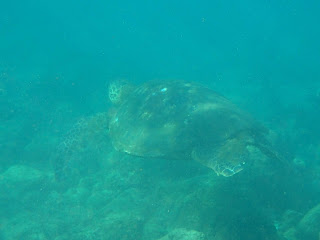 A nice large turtle swam past me. I snapped a couple of photos as it went by, then I went the other way. 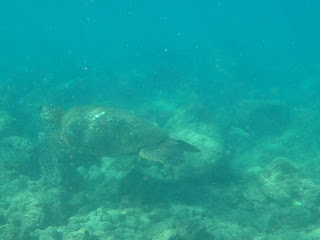 A surprise Leaf Fish! This photo was taken from above. The fish had installed itself in a cleft in the rock and was hanging with its face toward the ocean floor. You can see one "foot" above the body. 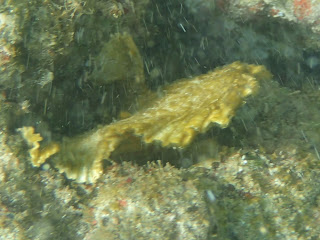 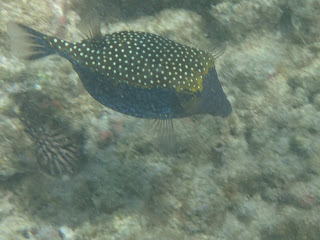 I was at first afraid that this operculum was in use, but luckily, it turned out just to be lying on a puka shell. So I snagged both. 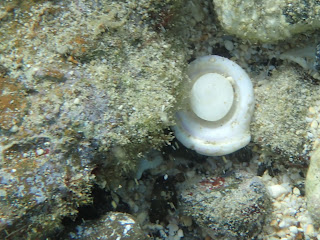 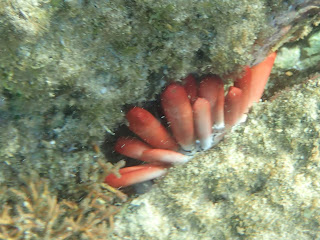 This Rock Mover Wrasse seemed surprised that I appeared to check out the urchin, sadly dead and partially eaten. And no, I don't know what killed it. 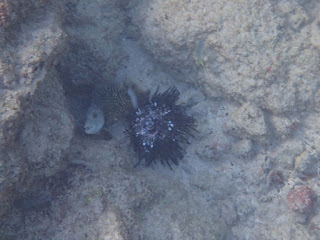 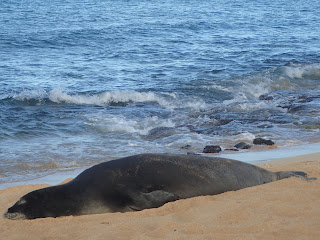 Snowflake Moray eel, trying to wend its way away from me... 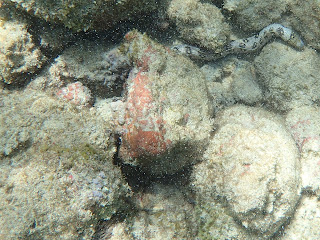