Welcome to my 300th post on google blogger! I am as surprised as you may be. And I saw maybe 3 octopuses....
Why maybe? Because they were firmly hiding in the dens in the ocean floor and I can't be positive that they were what I thought they were. 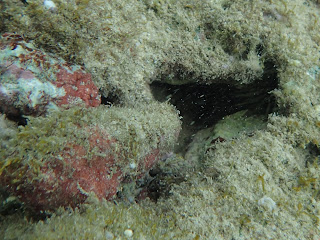 See what I mean? On 2 of the possible 3, I did see that shrinking back movement when I peeked in, and that's usually a good indicator. I was surprised to see the one above, as that is the same hole that the moray eel was in last time. Ah, sweet mysteries!

What isn't such a sweet mystery is my inability to definitely identify eels and shells. For example: 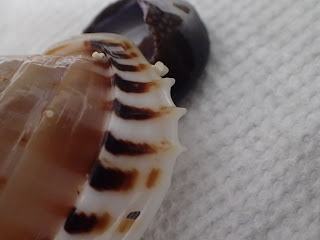 I think it's a Channeled Tun shell, but am not sure. I was surprised to see the pokey things on the edge of the shell. I have never seen these before, but it occurred to me that perhaps they are the first to be broken off when the shell is bashed around. But pretty non? 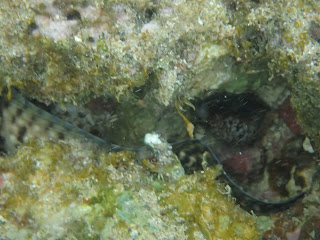 This to-be-named eel was in a hole with a cowry shell. 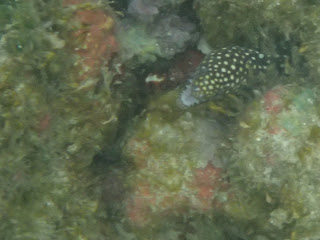 This is a whitemouth moray. 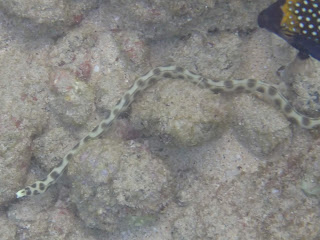 Magnificent Snake Eel came totally out, watched by me and the Trunk Fish. 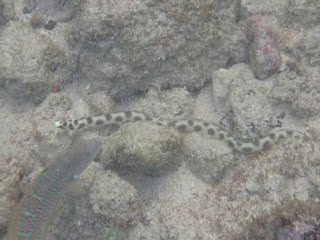 Snowflake Moray getting its breath. 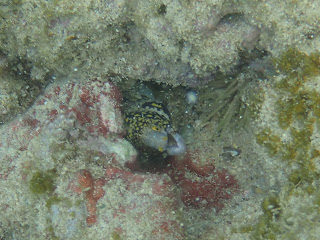 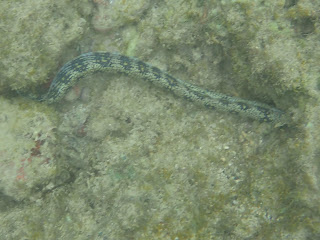 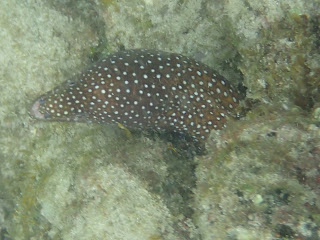 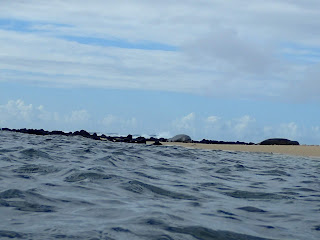 Cute little Blue Spined Unicorn. Even their lips are blue! 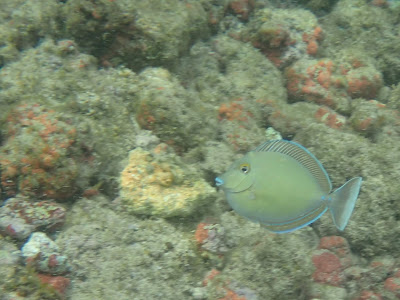 This was one very smart octopus.  When I visited this den earlier, there were no rocks in the den. About 1/2 hour later, here's what I found. Adds to the camouflage.. 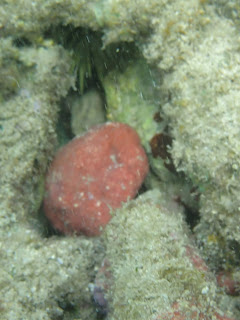 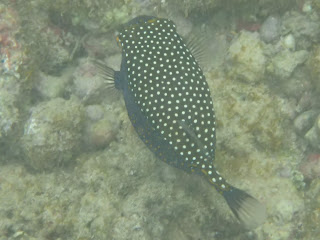 Maybe a circumcision cone...odd name, isn't it? And I'm not sure. 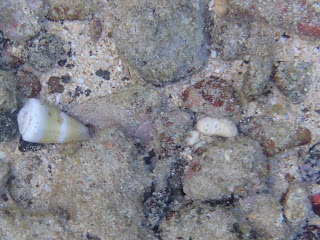 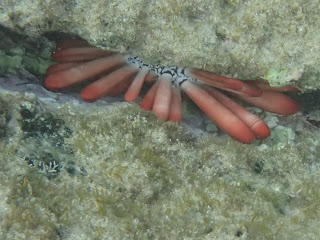 You win if you can see the seal....there are two "bumps" in the water. The one on the left is a buoy. The other one is the seal. It was lurking for some reason... 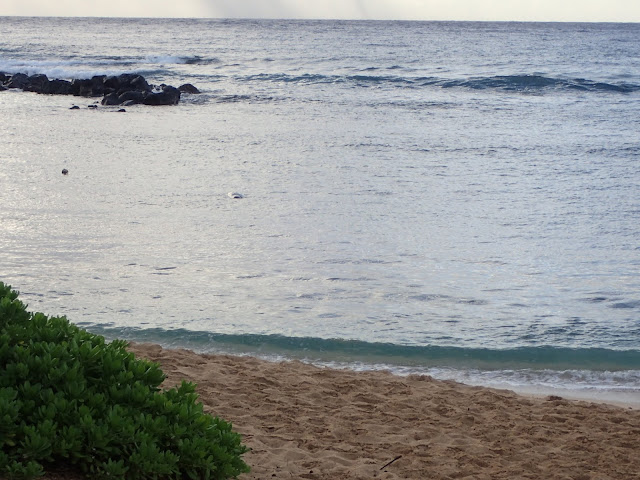 Today's haul: cone shell, cowry shell, turban shell, operculum, and that tun. I only pick 'em up if they are broken, as that's the sure way to know they are not in use... And a penny. 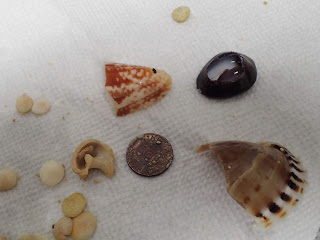 Don't you think carrying around all this protection would be heavy? 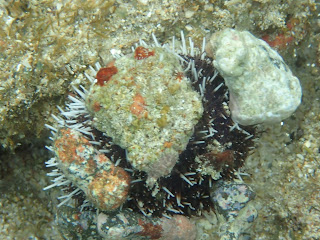 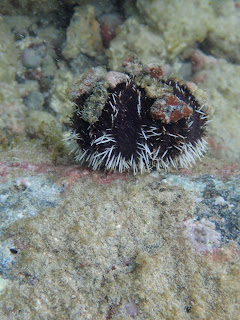 We did have some interesting clouds 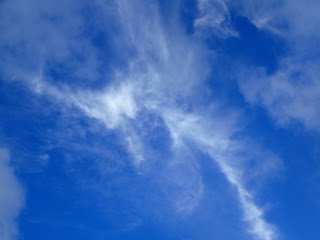 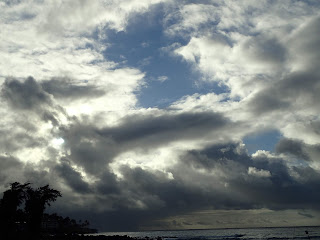 and sometimes they came with palm trees 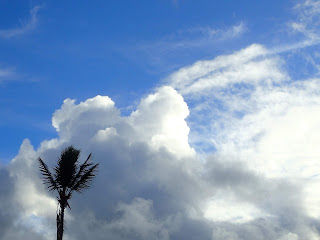 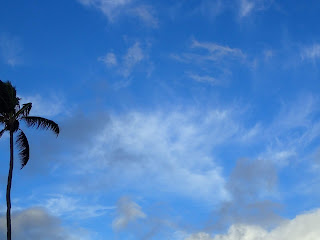 and sometimes with rain out at sea. 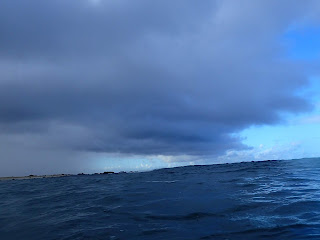 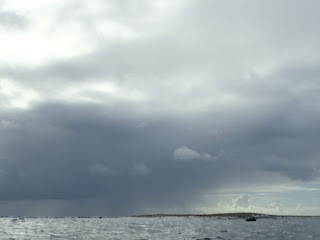 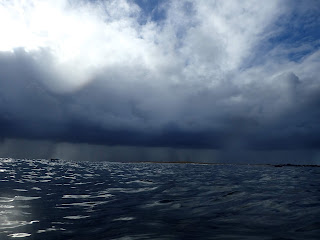 and even a rainbow 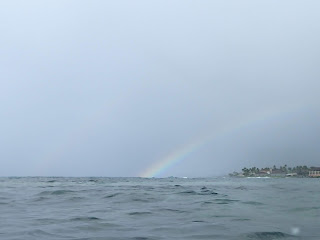 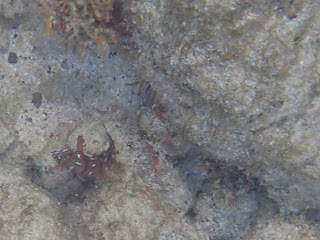 It did rain on me while I was in the water for a few minutes, but to me that's gold, as it makes the visitors leave the area....which helps me get around better! Props to God for a nice and safe swim. Thanks for reading!
Posted by octopigirl7 at 3:16 PM