You know love is more important than a ring, right?

So I had been swimming about two hours and this young lady swam up to me, saying: "Can you help us?!"

Not the way a normal conversation starts in the water.  And it makes me think: "Oh no! what is wrong?!"

So since I was on my good behavior at the time, I asked "How can I help you?"

Turns out that her husband, standing in the water, had lost his wedding ring.

They didn't have "goggles", so she asked if I could look around. Which of course, I did. And in about 2 minutes, I found it. I put my gloved hand up out of the water, with the ring on my finger, over the glove.

He said: "Thank you so much! You are my hero!!!" So I gave him the skinny on how to avoid this happening again (make a fist, then the ring can't come off over the knuckle.) And then I said: "You do know the love is more important than the ring, right?" She agreed, but then added: "It was an expensive ring!"

As I swam away, I thought of many things, major among them was that I should have taken a photo of the ring. Oh well. All's well that ends well. The guy was very smart to stay still, so he knew the general area in which the ring could be found.

So perhaps as a reward, I found 7 octopuses! This is a banner day, and I think might be a record since coming back to Kauai.

There were also a couple of snoozing seals..the best kind: 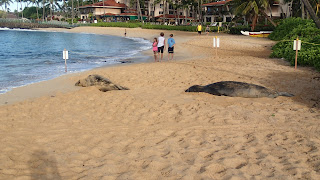 I did try to get the people out of the shot, but the seals, since there were 2, were long! 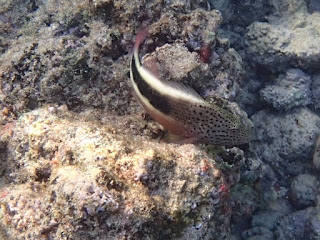 This hawkfish had just flown down and back and was now resting.... 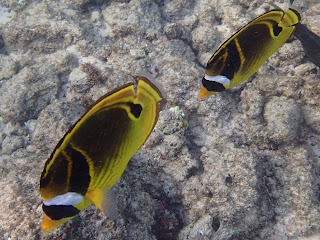 To Raccoon Butterfly fish.  One of the many types of fish that travel in pairs. 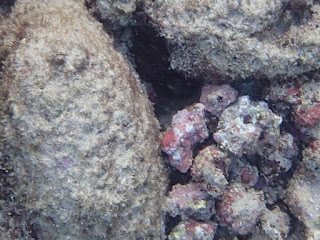 Octopus #1. See? They DO build things...You can see the brown in the hole and just a little bit of the white siphon. The octopus piles the rocks up outside the den. Protective maybe, but some of us have figured out that they do this, so we look for the piles of rocks. (Shhhhh....do not tell tako-eaters this clue.) 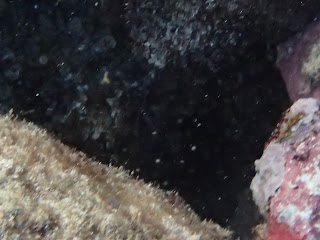 Closer up. You can see the brown and white of its head. 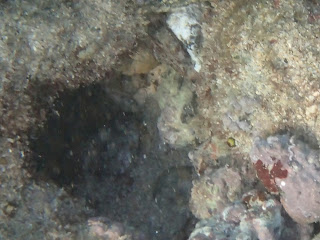 Another octopus in another den. 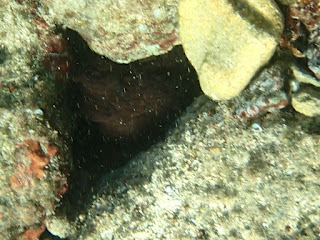 This is the one that hides out on the crossover area between the big and little ponds. 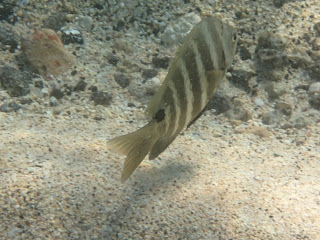 Awwww.Abudefduf. I love saying that. They are cool fish too. 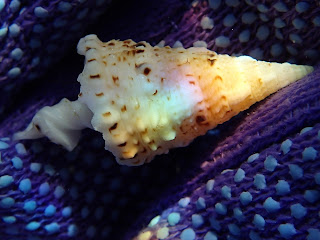 Part of a very nice shell. This one came home with me because it wasn't being used. 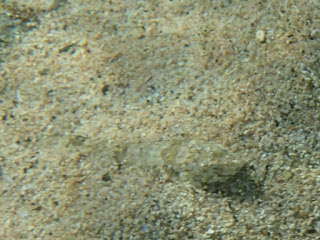 This Lizard Fish had just scooted across the sand and re-buried itself.

Isn't it amazing how they are the almost same color as the sand?! 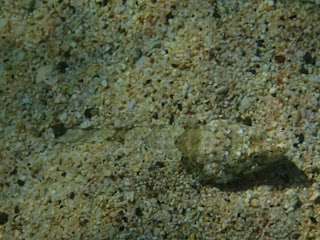 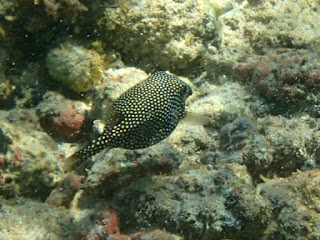 Two young Rock Mover Wrasses....they are so clown-like in their faces! 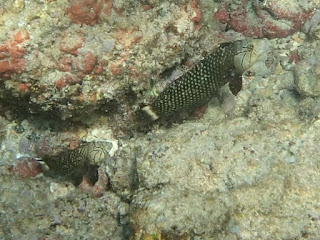 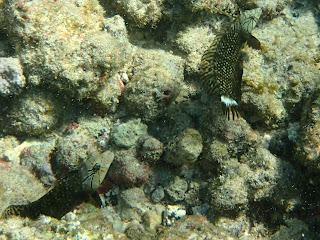 I think this is a land snail, but I brought it home because it shows the interior architecture. Imagine the animal inching along inside those tunnels. 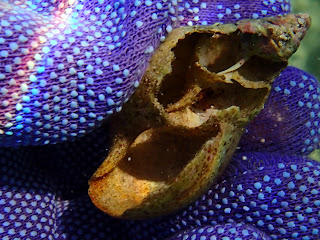 A Humu and a littler one! 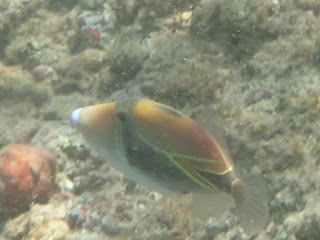 Mostly, they stay near the hole so they can pop in and hide when they need to.This one was probably 2 inches long...so cute. 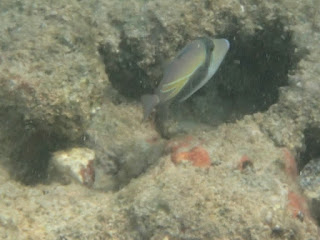 If you look very carefully, you'll see the octopus eye. It's red and horizontal. 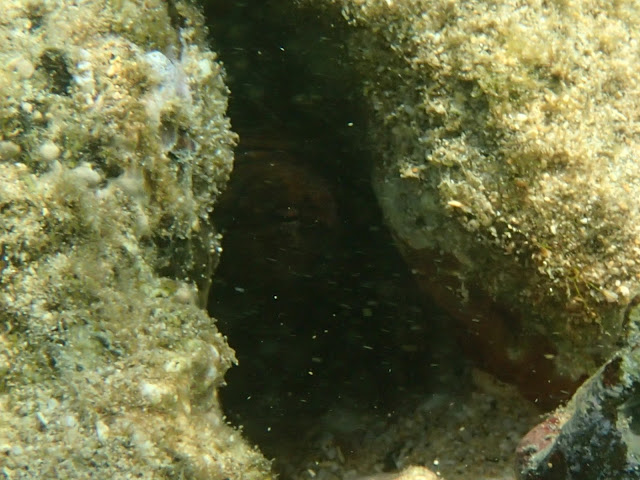 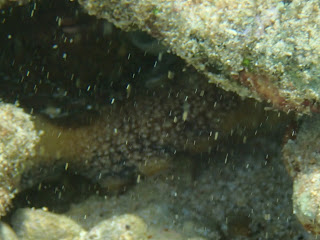 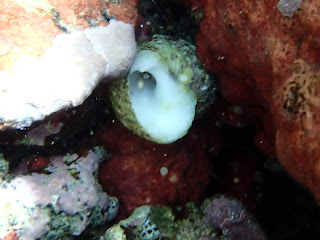 Shell which had someone living inside. 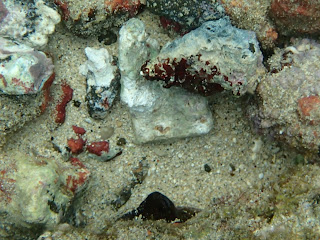 Octopus #7 peeking at me from its den. They are too curious for their own good: when they think you're gone, they peek out to make sure. If you're very quiet, you can watch them do a double-take when they see you still there...ha 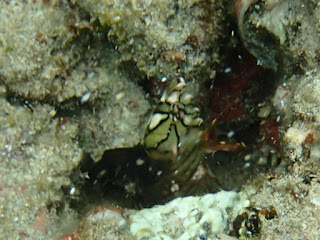 Another Rock Mover Wrasse youngster, with the juvenile antlers. 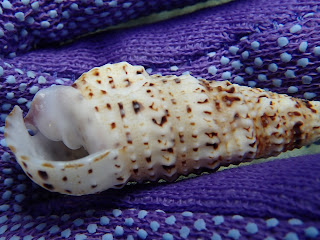 This fully intact shell sadly had someone, probably a crab, living there, so I had to put it back down. drat. But it's good that someone was using it. 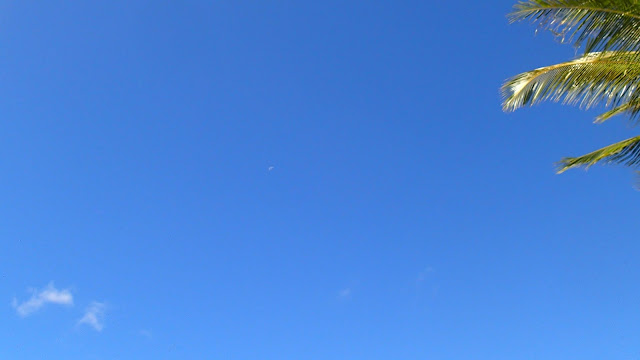 The Moon and a cloud and a palm tree. 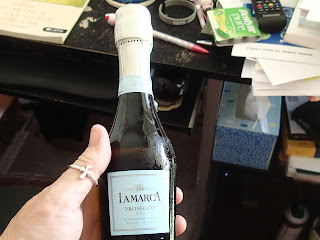 And I found small bottles of Prosecco! We never want to drink as much as comes in a big bottle, so this was a boon.

And the moral from today: don't wear your wedding ring swimming...leave it in the hotel safe. And if you do wear it, close your hand into a fist. And if worst case you do lose it, stay where you are and call in help!

Thanks, God. I was thinking they couldn't have called upon a better finder: I do go slowly so I can see octopuses and I do have an eagle eye on the bottom. And I hope and pray they have a happy, long married life. Like me and my sweetie: almost 20 years!
Posted by octopigirl7 at 6:23 PM