If you have been reading my posts for a while, you know I usually don't touch stuff underwater...for many reasons! Mostly, I feel it's kinda rude to touch animals when they are in their natural habitat. Kinda like going into someone's living room and putting your hand on their head when they are not expecting it.

But also, I think it's better if they don't get too accustomed to us, because the next hand that comes close might be a spear fisherman! (And there was one in the water today.)

But the touch and go in the title of this post was more about the weather. Everyone and every online weather spot predicted not only rain, but thunderstorms! I have yet to hear any thunder, but I'm glad there was a respite from the rain, so I could swim.

Everyone also predicted "brown water", of which I saw none. Thankfully. 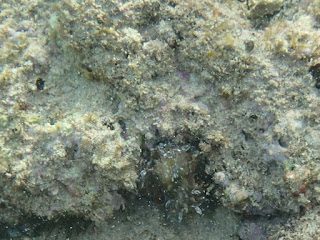 Octopus #1. See it? They are quite good at camouflage... 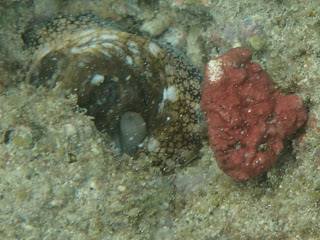 Octopus #2. I remember the red rock. Sometimes, since I scoot around the same area several times, it's hard to remember if I have already seen the octopus. So a "landmark", even a movable one, is a good thing. 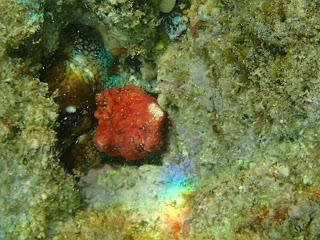 I thought the rainbow colors were a nice touch. 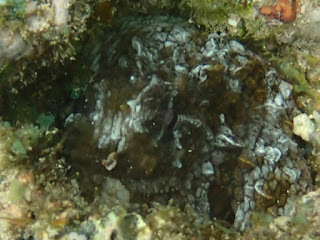 He'e #3. See the bumps? And the eye is in the center of the shot, with white lines radiating out from it. Note that it is NOT round! People always want to humanize the octopus and give them round eyes. 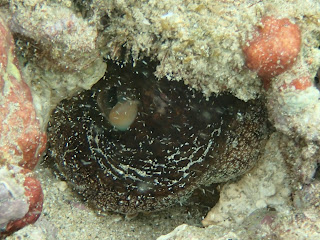 This octopus is showing its siphon and smooth skin. With lines of sand that blew onto it. 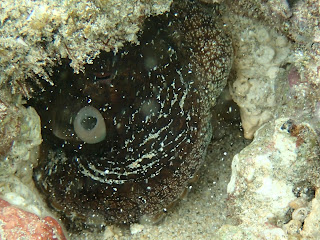 Below is octopus #5. Note the difference in color. 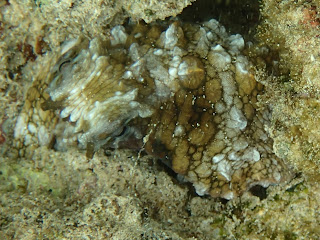 It's because the surrounding area is more greenish/yellowish, so the octopus accommodates, to better blend in. That's my reason at least. 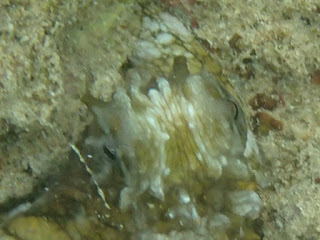 Very happy and quite surprised to see 5 octopuses today. The water clarity was not the best, because the waves were thrashing the water and also it was high tide. The rip current was fully moving me, so I couldn't even get to the octopuses that are usually by the shoreline near the point between deep and shallow water. I didn't even attempt the deep water today, as the waves had come in. Didn't bother the seals, though: 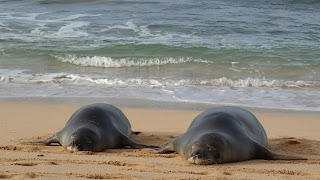 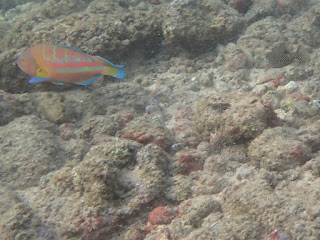 Christmas Wrasse and a Trunk Fish. The latter is harder to see... 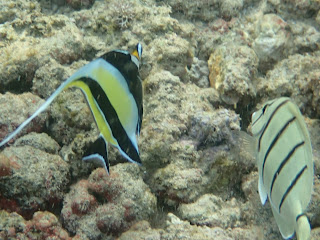 Aren't stripes interesting? Basically, you could describe both of these fish as having stripes from their backs to their bellies, but it fascinates me that God created creatures so similar, yet different. Different nose, different tails, different colors. Obviously, he was having a good day.. 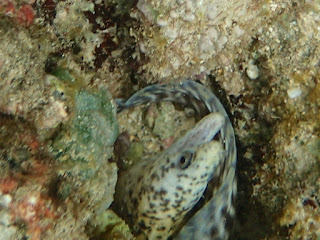 And then Mr. Eel. Are you accustomed by now to me not knowing what type of eel it is? I could look it up, but I'm not great at i.d.ing things via a book....and this was a young one, so probably might not even be in the book.....One excuse is as good as another. 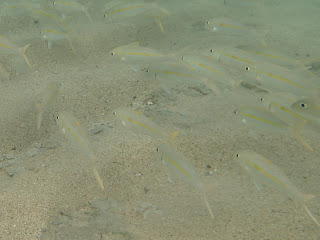 Goat fish. There are scadzillions of these right now, moving over the reef and sand. You can see all their eyes looking to make sure no one was going to eat them. 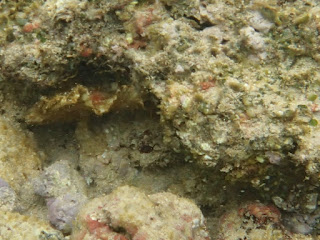 Finally found the leaf fish. Look for the foot resting on the rock. 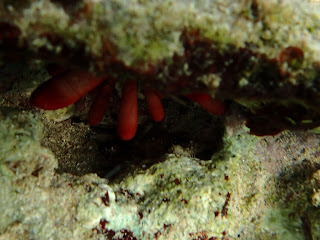 Pencil Urchin. Between a rock and a hard place. I'm not sure what the lady at work means when she says Urchin. There are so many types! 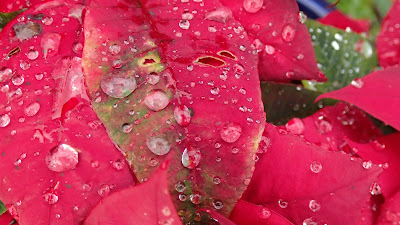 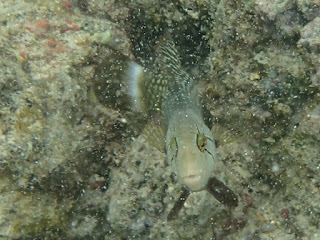 Rock Mover Wrasse, facing me for a change. 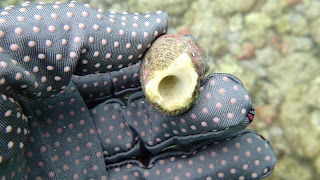 Turban shell, apparently empty. This is the shell that gives up the opercula.  I don't like to think that for every one I find, there's a dead Turban shell, so I'm hopeful that perhaps they can grow new ones. Note my stylish new glove....It's a "Seed Planting" glove. Very thin and makes it easier to pick things up. It also hides my silver cross ring. I haven't seen a barracuda in a long time, but have heard they like shiny stuff. It occurred to me recently that since I'm always looking at the bottom for octopus, that perhaps there are barracuda and I'm just not seeing them. They have in the past lurked up near the surface of the water.. 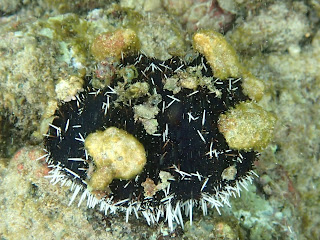 There was a very cute little boy in the office this week. Everyone that passed by was asked what their favorite animal in the ocean was.  One lady said Urchin. So I'll be showing her these pix. 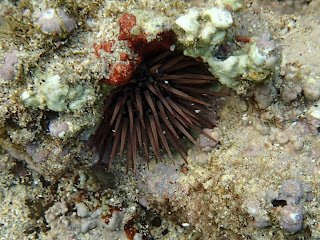 Very happy with today's ocean visit. The water wasn't pristine, but it was good enough to let me see 5 octopuses! And as far as I know, the spear fisherman didn't get anything I care about.

Oh and by the way: I asked the cute little boy his favorite ocean animal: he answered OCTOPUS! I love that kid! (I also asked him if he was married. He replied No. I said why not? He said that he didn't want to!) Oh so cute. I told his dad that I love kids because they always tell you exactly what they think.
Posted by octopigirl7 at 4:16 PM