Today's swim was full of trios: 3 octopus and 3 scorpion fish. Yes!
I nearly put my hand down on the first scorpion fish: 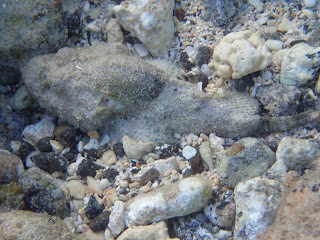 I was picking up an operculum and this nice Scorpion Fish inched a little bit to move further away when I dove down. I thought that was quite nice and am thankful it didn't take offense at me! I know to be more careful, but still have a ways to go, apparently. 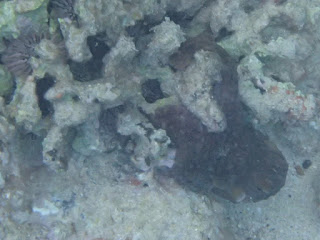 This was octopus #1, out in the deeper water. I LOVE being out there, as there's more room to move and the likelihood of seeing bigger fish is greater. Of course, I do not want to see the really big fish, so I pray for protection. The octopus above turned brown when I dove down; the following picture is what I first saw, with regular coloration. 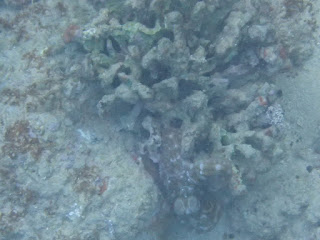 The octopus has 2 circles over its eyes. This one was slowly hunting, move its tentacles into the coral to see if there were any exciting things to eat. 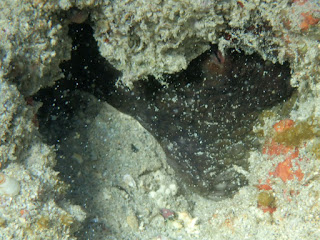 It also "peeked" at me. It's in the exact center of the photo...just the eye and the radiating white lines emanating from the eye. 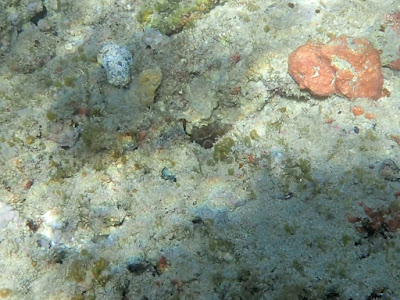 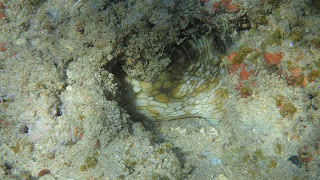 This one started off with "regular" colors, but changed to the dark brown in the previous photo when it realized I was getting closer. 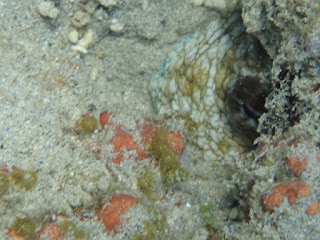 The man who swam by with his go-pro didn't even slow down to see what I was taking pix of...ah, the uninitiated! 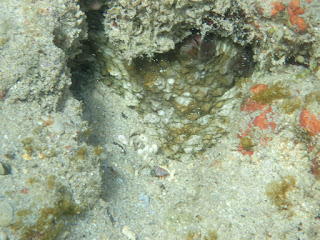 Scorpion fish #2: the Spotfin Scorpion fish. Somehow, they are not as exciting as the Devil Scorps. Not sure why. 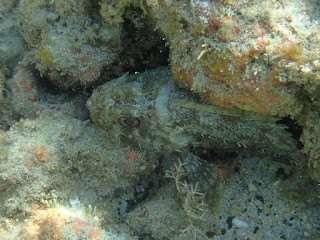 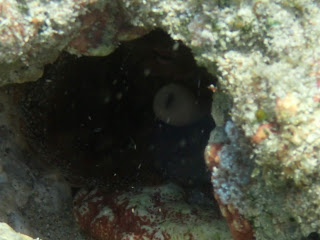 This is the one who wasn't home earlier in the dive...glad it got back in time for a photo shoot. 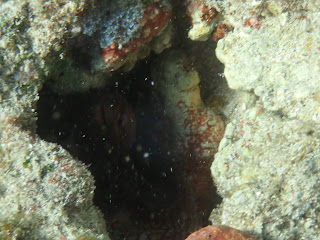 Completing the trios is Devil Scorp #3. Maybe 10 inches long; I do have a horrible time trying to estimate the size of things underwater. Let's just say I'm glad it had no interest in biting me. Ambush predators, the lot of them. 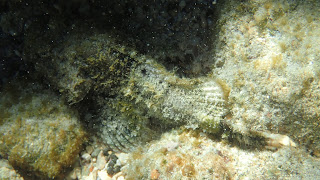 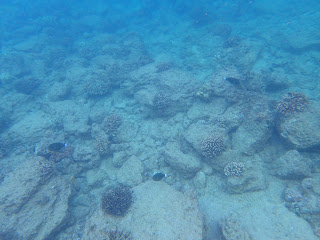 3 Pinktail Durgon in one shot! woo-hoo! In the deep side. So the trio portion of the post is complete; here are the other treats I captured with my camera: 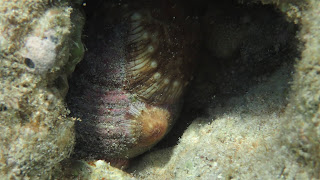 I think these are crabs with anemone on the back. 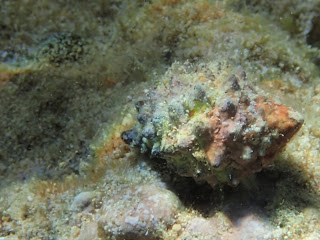 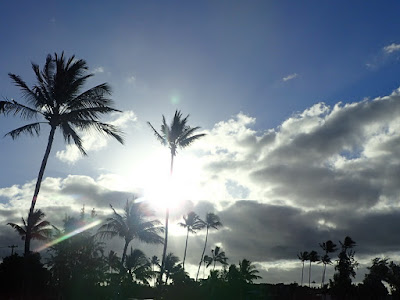 Sun shining on the clouds and palms. It almost makes one think part of the palm tree was missing. 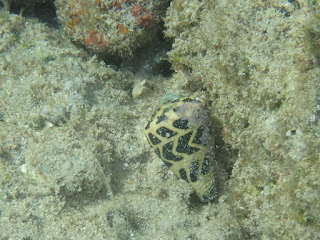 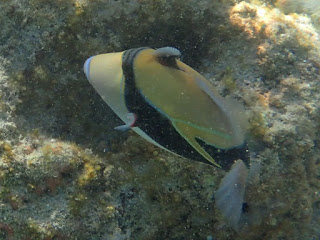 A nice Humu with his spike partially up. 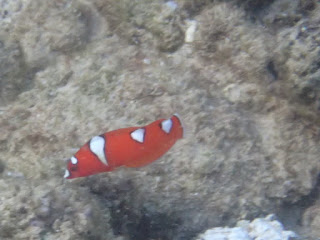 And a juvenile Yellow Tail Coris. I don't know of any other fish that differs so much in coloration from the adult. 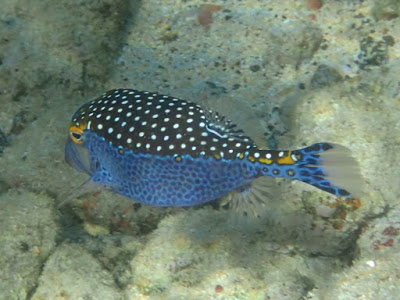 And the required male Trunk or Box fish 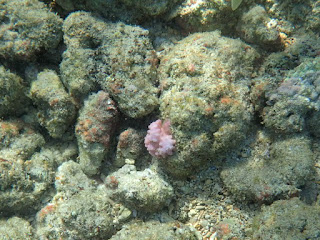 The small bit of pink coral really stood out near the sand-colored rocks. 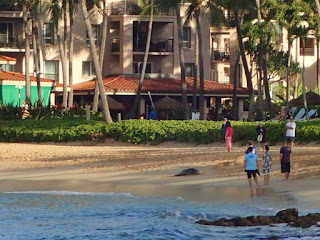 Seal on the beach, snoozing. Haven't seen them for a few days, so it was good to know they were back. And that they weren't in the water. I was able to swim freely. 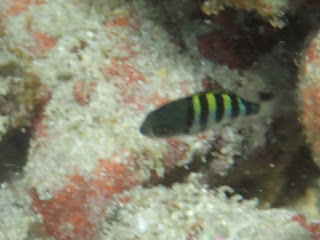 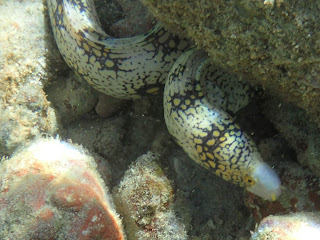 Snowflake moray. Probably looking for something to snack on. 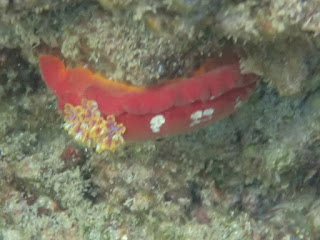 Spanish Dancer nudibranch hanging underneath a bit of rock. 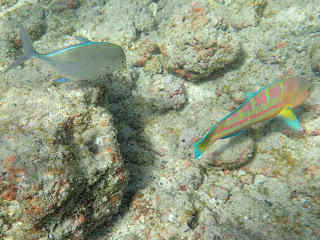 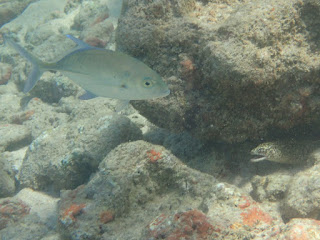 This Trevally was circling an eel. 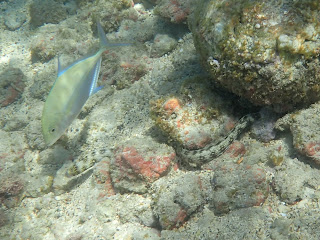 As was this one. At Hanauma Bay, I would often see Trevally circling a hiding octopus. Guess which I'd prefer? But a nice swim anyway. The new wetsuit is working out well.
Posted by octopigirl7 at 4:10 PM