A good, if short, conversation

In addition to finding 2 octopuses, yay, I had a nice brief talk with a man today who asked, while I was coming in from my swim: "Does it get any deeper?" Of course, being in the sandy part of the Keiki Pool, I replied, that yes it does! The kiddie pool is mostly shallow throughout, although you can get out to the wave break where it is sometimes deep enough to cover you to your shoulders.

I did advise him to please not pull himself along by the rocks on the bottom, as we have urchins and scorpion fish! He agreed to swim. Nice guy. It's amazing that simply wearing a wetsuit can make people think you know what you're doing. I do know some things, but certainly am not an expert. I just have more experience than others, since I'm blessed to be able to swim at least 3 times per week. So I was nice! (I can learn.)

As a general rule, I do not put people in my posts....since I'm usually underwater, it's rather hard to ask their permission. I especially don't put kids in my posts, which is kind of a shame, since some of them are so stinkin' cute! I just don't want to do anything that might make them a target. That said, you might see a photo later: I did finally get a full wetsuit, so I might have someone take my photo in it and include it in a future post.

So on to the pix: 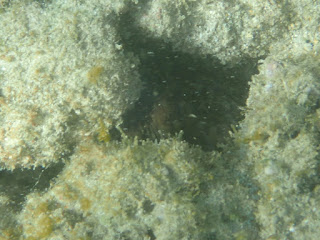 Octopus #1 stayed in his little rectangular den, so it was hard to catch a good shot. Apparently, this octopus was not particularly curious about the big black blob hanging around outside its den (me). But it started the day off right. (I was able to swim in the deeper side first, but didn't see any octopuses there.) 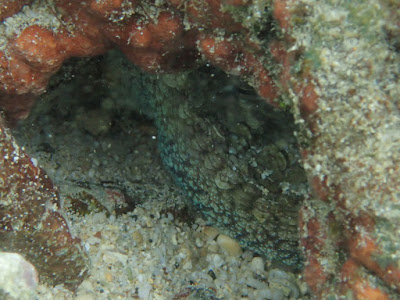 I had the feeling that this "regular" octopus was at home, but when I first saw its rock, didn't see the animal. Until later.  In the following picture, it is peeking at me from inside its den. They are apparently quite curious. 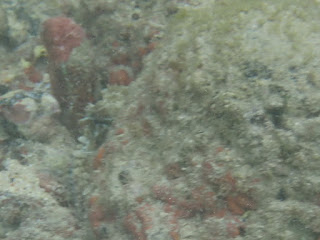 In any case, they are always alert. They will shrink down into the den if they determine that you are a threat.

None of the two octopuses did any hunting or flying today, so it was a low key, but appreciated, swim. 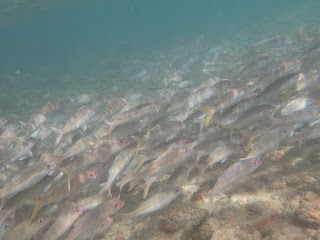 I like to call these photos A Mess of Goats, just because it's fun. They hang in a huge school near the intersection of the shallow and the deep ponds. They move away from me, too, so they do acknowledge that I'm there. 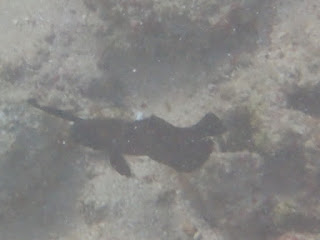 A juvenile Razor Fish. I have seen this one before. I say that, assuming it's the same one, because in my experience they are quite rare. 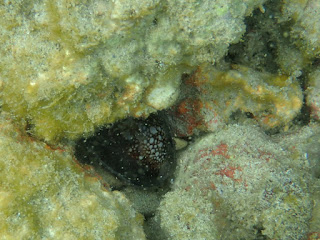 Cowry shell hiding under an overhang. I also found 2 empty Cowry shells, so they came home with me. 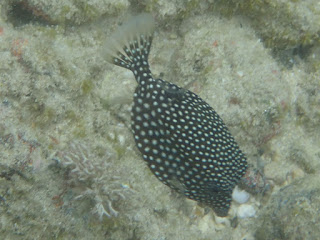 Small female Trunk Fish. They are very shy; this one was heading into a hole under a rock. 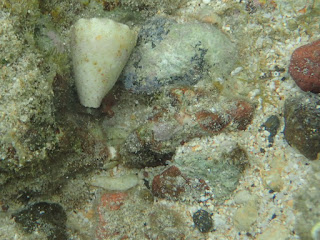 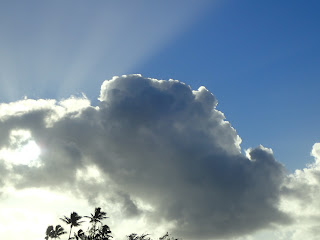 God's Rays. The wind had abated a bit today, so it was nice to not feel totally chilled upon getting out. 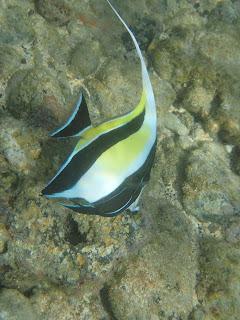 Moorish Idol. So delicate and pretty. 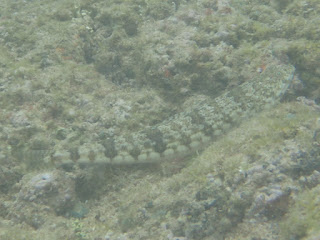 This Lizard fish was zooming away before I even saw it, so I'm not sure if I scared it or something else did. 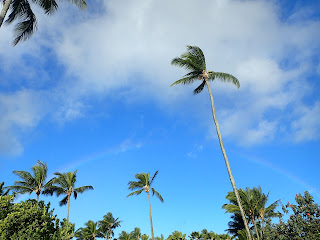 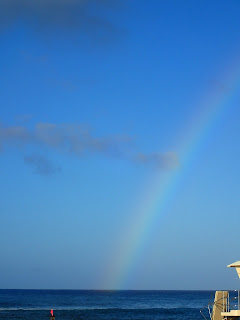 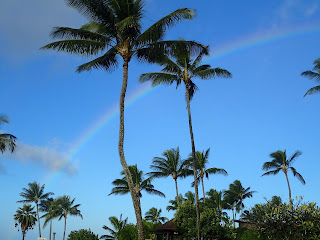 And a sleek looking snoozing seal. I think this one might have molted pretty recently because its skin looked super smooth. I'm glad I'm not a seal: if I had that much sand on my face, I'd be itchy and cranky! 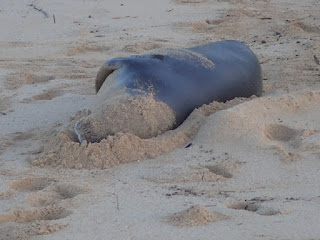 A Turban shell. I thought when I first saw it that it was the Turban Shell animal I was seeing in it, but upon closer exam with my sweetheart, we think that might be part of a crab claw that we are seeing! 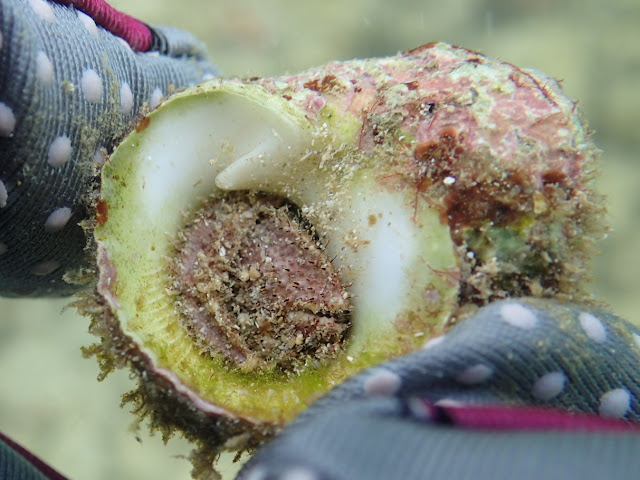 Note the little spikey things coming out of the pink part. Spikey things is a scientific description. NAH. 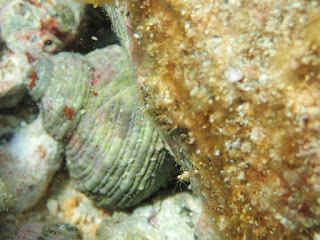 And a Turban shell hiding under a rock. I'd bet this one was still occupied by the original animal, but I didn't pick it up, so can't be sure.

What I am sure about was all the trash I picked up today: a pair of clip-on sunglasses, two of those hard plastic gray things, several pieces of glass and the usual scrunchies.

Now for today's Urchins: most of the pictures show the stuff on their backs. Must be heavy. 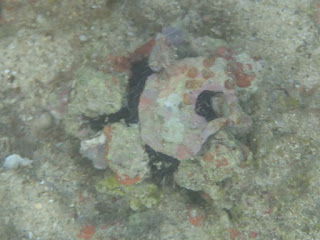 This one shows you an urchin with relatively few things on its back, so you can get a better idea of what the rocks and other stuff are hiding. 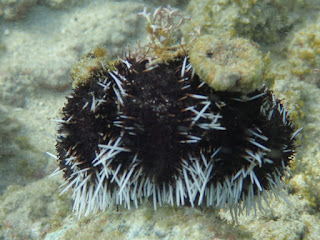 Yes, believe it or not, there is an urchin under there! If I were a predator, I would have to think pretty hard about where to attack the animal. 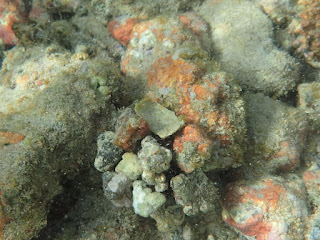 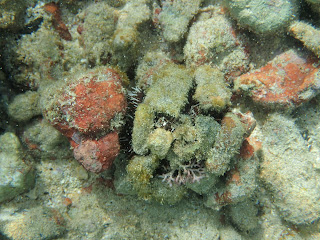 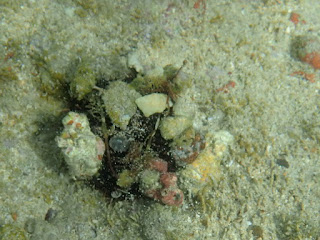 The following one took the extra precaution of also hiding under an overhanging rock. 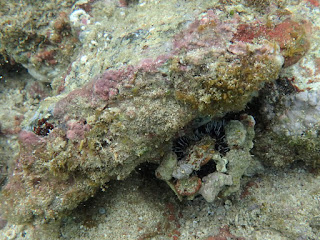 And a cute small one. 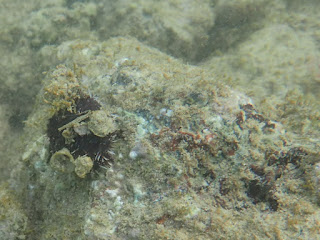 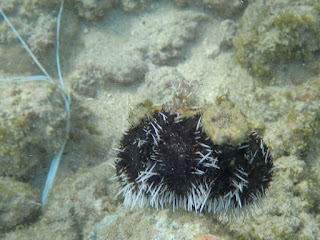 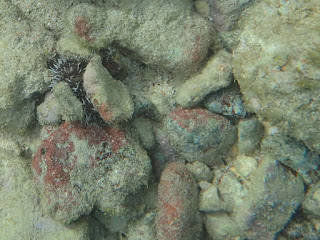 Believe it or not, I do think the urchin here was also trying to grab that big red rock as part of its protective garb. Whew, what a lot of baggage.


The young Pinktail Durgon was out today again. I include its photo not because it's so marvelous, but because you can see its spike semi-raised. I don't know why it hangs out where it does, but I have seen it several times in this same area, near a coral head. I think it could dash in there to escape a predator, if it needed to, so perhaps that's why. It didn't hide from me though, so I'm thankful for that. 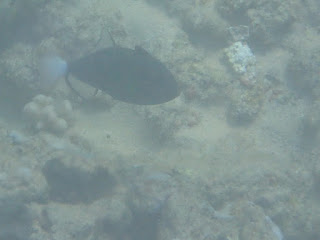 I should add that the lifeguard told me that Turtles are no longer considered endangered. Which is both good and bad: they don't rope them off anymore, but do make a line in the sand to encourage people to leave them alone...
Posted by octopigirl7 at 4:57 PM