I'm not chasing it...I just wanted to get closer for a better photo!

The first thing that went through my mind when I heard this from an uninformed and not very quick young lady today was: oy vey!

This is the animal I was hoping she wouldn't harass: 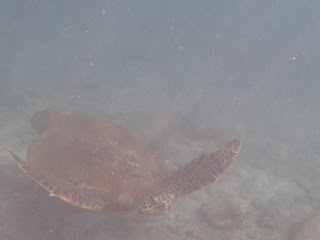 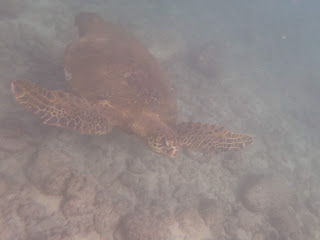 Not only are they federally protected, they are somewhat shy and really don't need people to bother them. My usual practice is to take a couple of quick photos and swim the other way.

It was a five octopus day, too, so other than the honu incident, things were great. I also saw a shell on shell on shell experience, but I'll get to that later. If you know me, you know he'e (octopuses) are my main interest! (Did you know there's no s in the Hawaiian language, so if you hear someone talk about leis, tell them!

Not to start off on the defensive, we were still recovering from a lot of rain recently, thanks to the passing of Hurricane Lane, so the visibility wasn't the best. 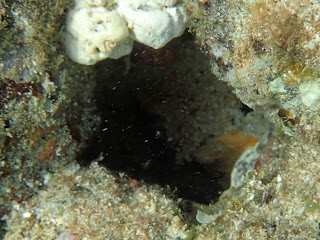 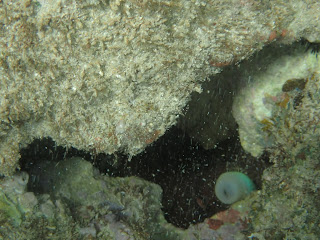 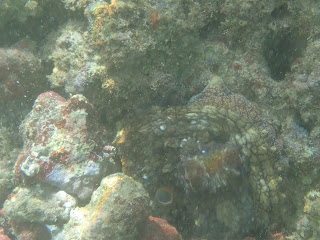 This is the big adult one that's out near the reef. 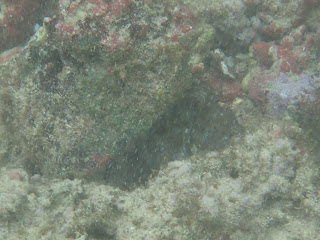 This one is harder to see, as it is hiding just below the rock, which is the same color as the octopus. 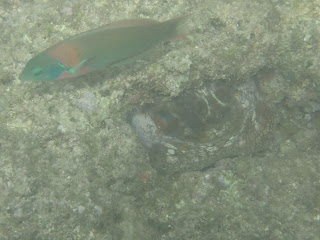 You can see the size of this one a little bit, as it is compared with the Saddle Wrasse. But it was a small wrasse...it is so hard to make the size evident! 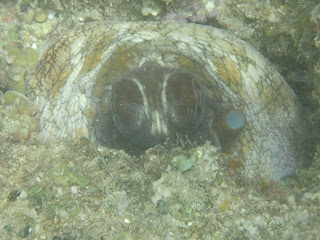 They do this a lot: bulk up so it looks like they have shoulders. Note the siphon on the right (tube with brown outside and white inside.) 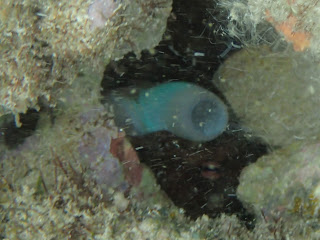 And this is one of my regulars, showing the aqua color on its siphon. And in this case, the eye is just below that tube. 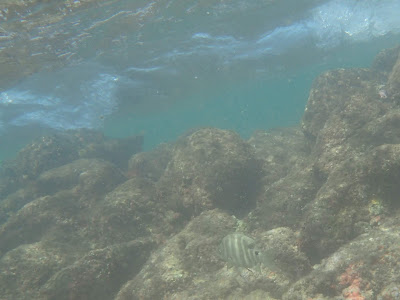 It is hard to discern, but the abudefduf pictured is the one with what I thought was a mortal wound...not! Apparently this fish wanted to live, wound and all. 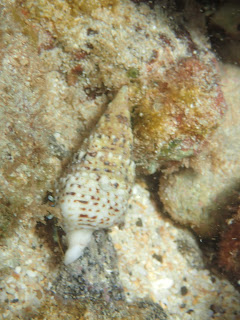 This is another Horn shell. I'll put the other one at the end of the post. 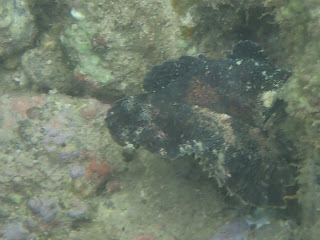 Can you tell what this is? A black Leaf Fish, holding tightly to the rock. It is usually hard to snatch a photo, as they try to stay out of the main flow of water. 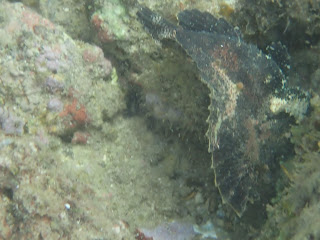 And I was VERY surprised to learn that Christmas Wrasse, the very pretty fish with aqua and orange, eats Brittle Star fish!!! Who knew?! This fish grabbed a snack ..and then proceeded to bash the bit it bit against rocks as it swam past. I really had never seen this activity before (and hubby says the brittle stars stay out of the light as a general rule, which is why I don't usually see them) and it blew my mind. I don't know why, but I had thought this fish would be a vegetarian. Shows what I know. 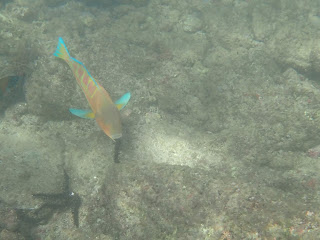 And an unusual sighting: the yellow phase of the Cigar Wrasse! Always love seeing these fish, as they run sleekly through the scene. 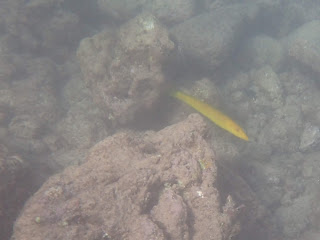 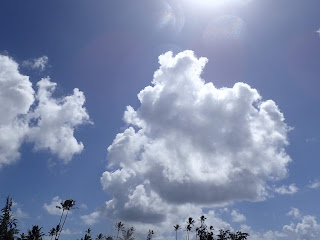 Clouds and Palm trees from the water. 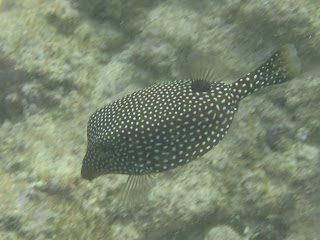 It took me a while to figure out what was going on here: 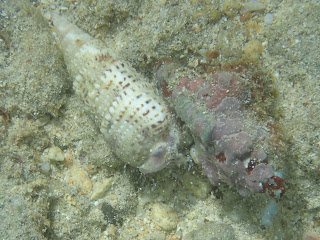 A hairy Triton Shell was locked in mortal combat with a horn shell! Face to face, as it were... 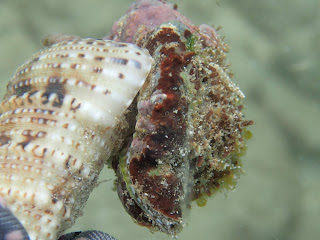 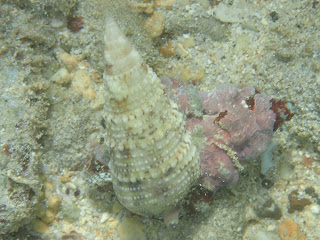 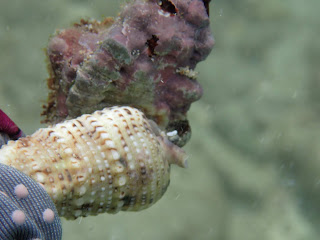 Look carefully at this Horn shell in the photo below: a bit of the animal is protruding from the shell on the bottom left (look for grey spots and white) 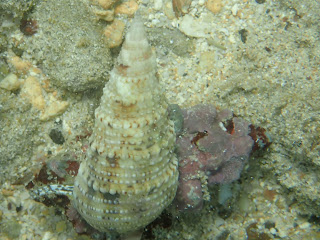 Below is what I saw at first. Look closely: there's a white bubble-shaped shell above the two other shells, and the crab inside has green legs. That is what I noted first, as the crab slogged its way around on the two shells. 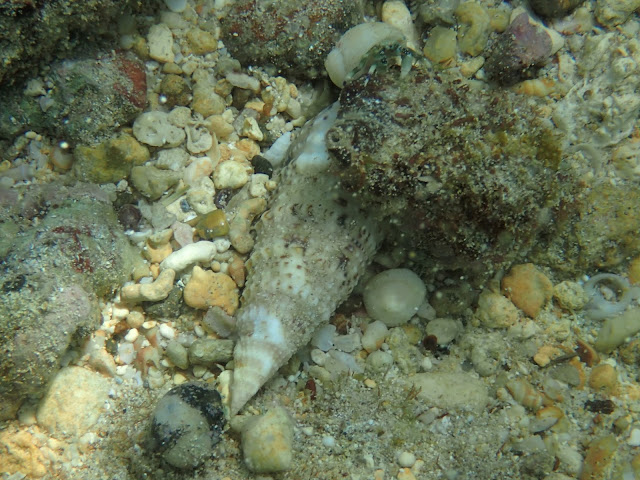 I must admit, and couldn't quickly find out on the internet, which of the two shells would win in a battle between Horn Shell and Hairy Triton. I did discover that the triton has acid in its body to use to take prey over, so I'm guessing the Triton will win. If it had been a fast battle, I would have used film. But there was very little evident activity while I was watching the shells. 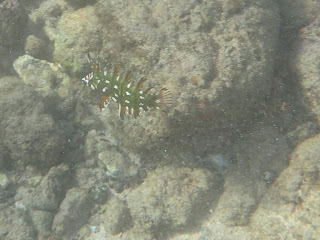 Juvenile Rock Mover Wrasse. Love these fish!
I did see a big adult rock mover, rubbing itself against rocks, but didn't see an octopus near that. 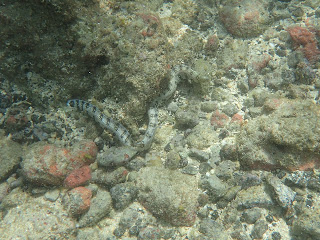 Snowflake Moray Eel trying desperately to get away from me and hide. Really, they are not federally protected, but truly, I don't hassle these animals. 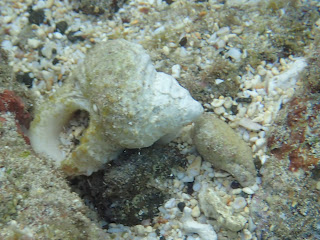 The Turban Shell above appeared old and empty (except for sand), but I wasn't sure. It was in pretty good shape, even if not in pretty condition, so I put it back down on the bottom.
A very nice swim. Two and a half hours, fully worth fighting the rip current!
Posted by octopigirl7 at 6:55 PM