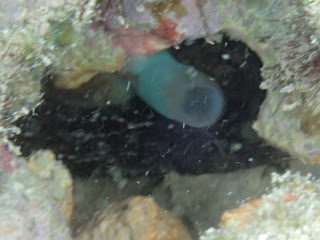 Not many people know, unless you've been reading my posts for a while, that sometimes, octopuses can make this really pretty aqua color. I'm not sure why they do, logically, since it would stand out on top of the mostly grey/brown sand colored bottom, and make them more visible to hunters. But I'm glad they do! (And I give credit to my sweetie for the post title...)

Today there were 3 octopuses...always a great number. 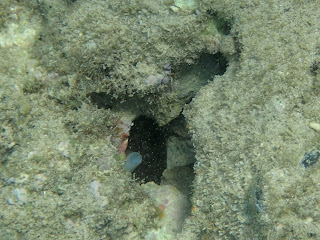 #2, above, was a "regular" who is sometimes there and sometimes not. Although, I noted today that at first it was really hard to see this one, as there is plenty of space in that den in which to hide. 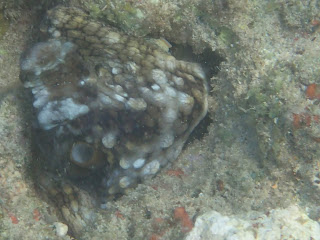 They can make all the variations of brown/white/sand colors. I do wonder, if they were sitting on something red, whether they'd make a real red. I did read they are color blind, so it's pretty amazing that they can do all with colors that they can. 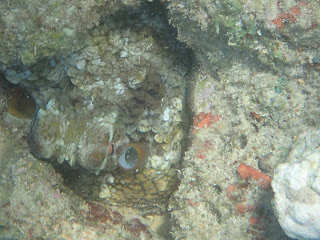 You can see #2's siphon. Just to the left is its eye, with another further left. I was glad for the white rock. It helped me find it again. 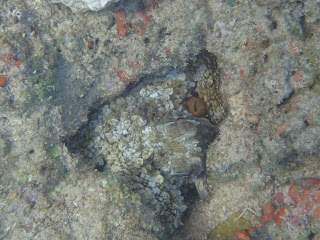 Another siphon and eye photo. I like all the little pebbles of color, as well as the bumps they can make. They can go from smooth to bumpy in a flash of the eye. 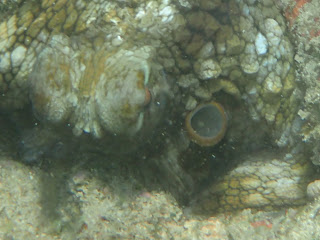 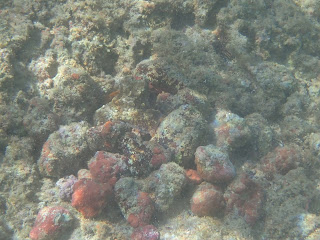 I think the octopus above is the same one as #2...when I left it alone for a few minutes, and then came back, it had apparently moved from the hole near the white rock, to the den with all the rocks outside. Tricky bugger. 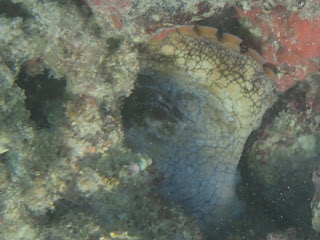 You can see the suckers in this one. And the eye. 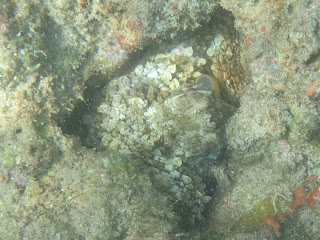 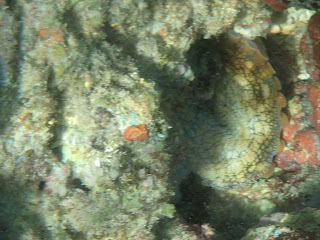 I must admit, it was hard to leave #2 alone. I don't get all that much chance to see an adult octopus these days, let alone one that let me snap as many photos as I wanted. (Which, in this case, was waaaaay too many! I came home with over 400 photos, many of them featuring this octopus.) 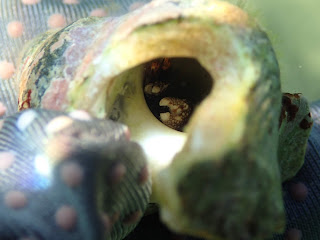 I almost had a new shell bit, but noted the little crab inside. Shells of any protective ability are apparently highly prized. 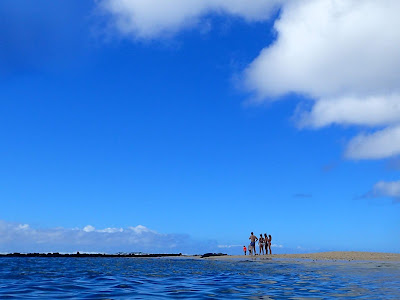 I had to yell at these people. They were not only too close to the two seals snoozing on the beach, but the little one in the orange bathing suit actually walked into biting distance of the seal!!! Where was the parent? After I yelled, the lifeguards echoed my cry and they walked away. What is not immediately evident is that if a seal bites someone, the SEAL sometimes gets relocated. Nothing probably happens to the person......except maybe that well-deserved bite. It is not only mean, but illegal, to harass a Monk Seal. They are protected and endangered. Beware! 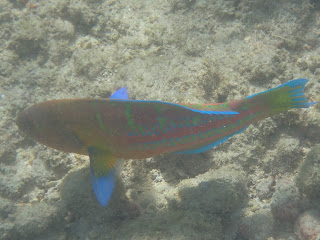 Christmas Wrasse. Showing its nice colors. For once, I was able to snap a photo before it sped off. 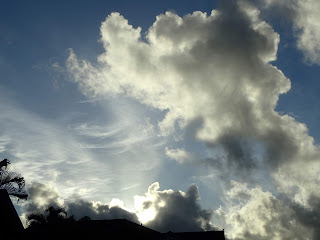 Pretty clouds are easier. They mostly stay still for a bit. 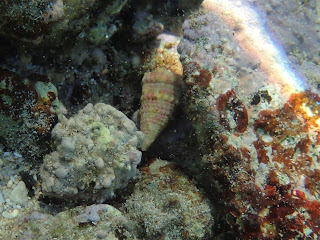 Nice shell. I didn't check whether it was empty, but assumed so. Therefore not collectable. 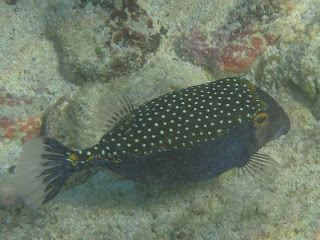 This is my musical octopus, wearing a hat. HA. You squeeze the legs and notes come out. I know how to do Mary Had a Little Lamb. Yeah, it's a hoot!
Mostly because it surprises people. 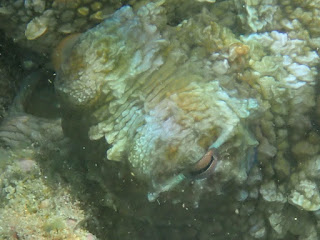 You can see the eye of #2..it has white lines radiating out from it. 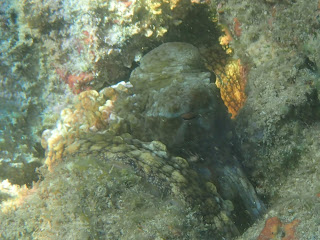 A bit of sun on a bit of leg in the background. 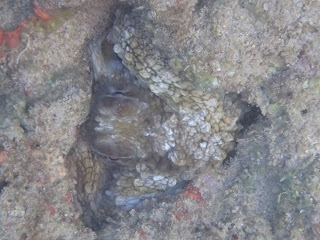 They can mash themselves into any shape. They can also squeeze out of mostly everything: bottles, jars, etc. As long as the exit hole is larger than their "beak." It is on the underside and therefore I rarely see it. 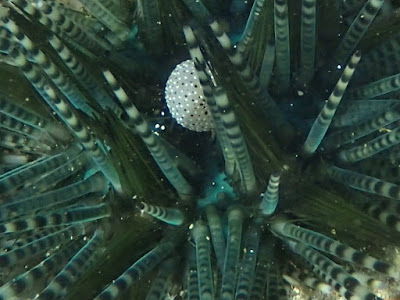 Very nice to be in the water again. I must train myself not to get so angry when people encroach on the seals or turtles. It just makes me so mad when they do that; they run the risk of scaring off the seal or turtle, then where would be go to see them at a distance?!