I would like to blame anyone but me for this hairdo, but only I am to blame! Thankfully, I have a wonderful foulard on, so that is somewhat distracting from the hair. It is all gray now: I have sworn off coloring it, now that I'm not working.

We were not particularly affected by the rail strike, but I did call this picture Bad, Bad Trains! Luckily, Alex knows how to get around a rail strike, so we took the plane from Rome to Paris. Take that, SNCF! 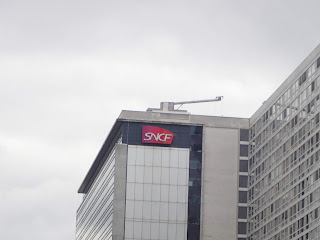 We visited the food exhibit, which had a bunch of breads. Security was of course tight...the lady scanned my jacket and pack. She asked what was in my shirt; I said Estomac! (French for stomach.) We both laughed.. 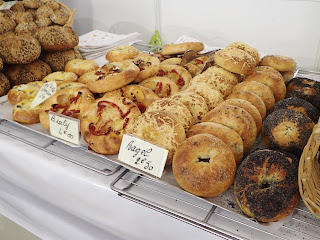 Chimneys are so plentiful and fascinating. They were a somewhat different shape in Italy. 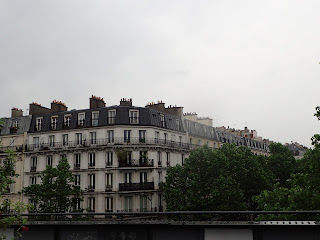 Cobblestones for Lisa, with nice leather shoes. I'm the one with toes.. 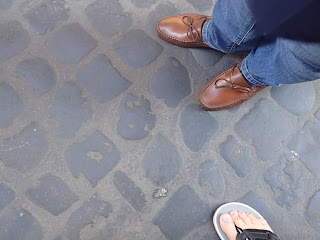 We were near the Coulee Vert. A very nice raised walkway with lots of plants and trees. I may not work at a garden anymore, but still enjoy all the prettiness and diversity. 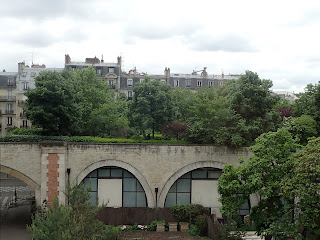 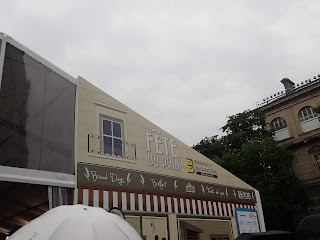 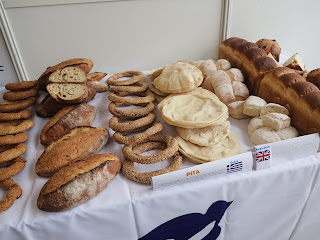 This apparently homeless lady cared about her dog, George. It would be a bummer to be on the street, let alone when it's raining. 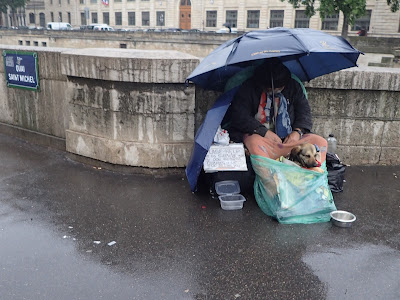 This was the art on our hotel room's wall.  I kept thinking I should know who these characters were, but couldn't place them. 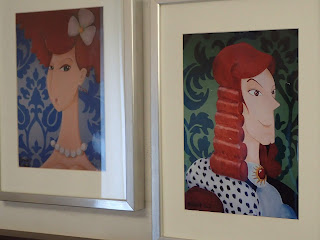 Spire of the church near us. It's nice to be able to go in, early in the morning. My pal, Ro, had recently lost her husband to cancer, so I actually lit a few candles, in addition to praying for her. 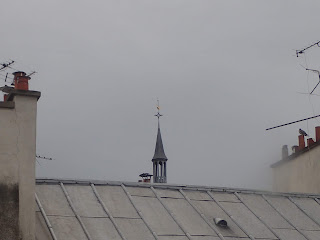 The grand lady church, Notre Dame. Of course, there are Notre Dames all over the world. It just means Our Lady. 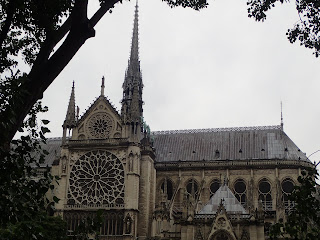 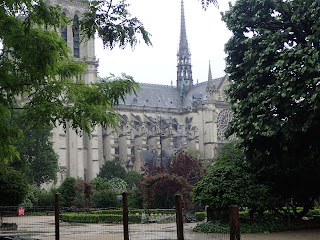 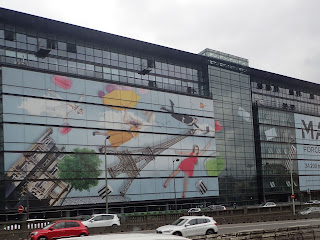 Our hotel was on this street, on the left. Right next to a place where blind folks either lived or went to school. I can only imagine how difficult it would be to navigate streets, in any city, without sight. 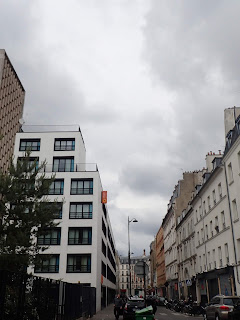 The bag from our two pears. We entered the store, and I asked the nice man, in French, which pears would be good to eat today. He picked two for me! Such a nice service. Of course, I asked not only for French practice, but because I got my hand slapped in 1975 (at another store in Paris) for picking fruit from a display on my own! So sensitive! 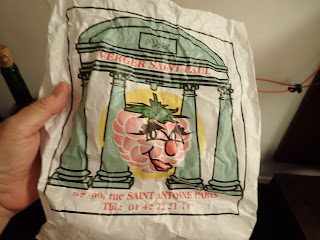 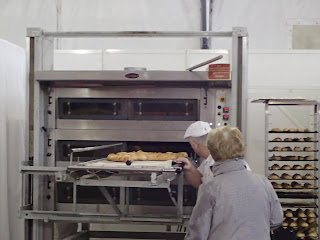 Since I missed the most famous Pieta in Italy, I snapped this quick shot. I also took the photo because obviously, Jesus was not still on the cross.  So often, He is depicted still hanging on that cross. Catch up, people! 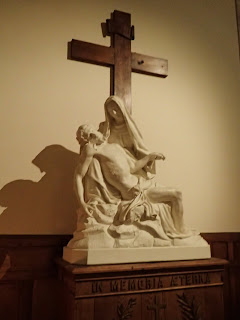 The red Eiffel. I had to smile. We could have spent money each day and never repeated a souvenir of this thing. We had thought of trying to see it at night this time, but figured we'd be too tired by the time it was dark enough. In our defense, we were walking a lot each day...and then there was the wine and cheese and bread..... 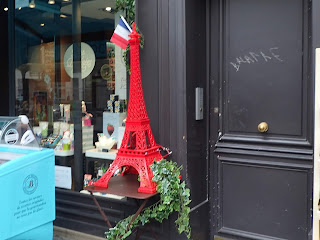 On the Coulee Vert. I was surprised when I looked at this photo closely and blown up, there are several little green bugs on it, in addition to the water droplets. I find it quite difficult to take a flower photo with no bugs on the plants... 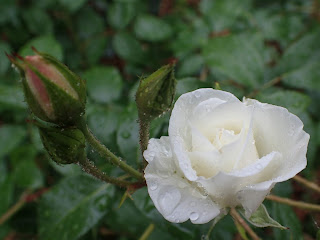 One of our fave meals: steak frites!We try to include a healthy salad, too. 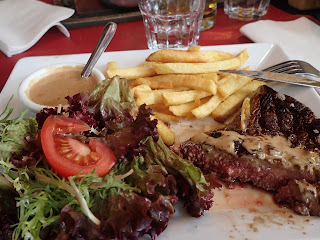 On the way to the airport, going home. We took Le Bus Direct. Very convenient and comfortable. I thought perhaps the driver had missed our departure area, but we had to go around again to get to it. 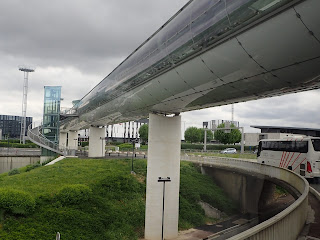 More bread...I am not sure what the thing in the middle was called, but it was pretty. 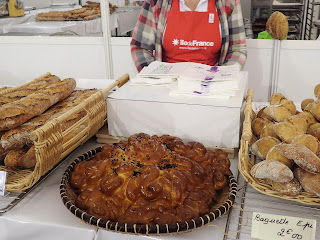 More pix in a minute. We love France: look out!
Posted by octopigirl7 at 5:34 PM