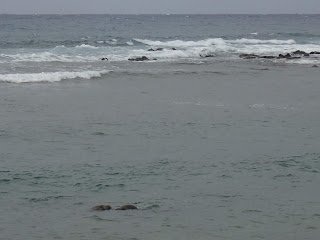 Of course, don't know what they were saying, but they were definitely frolicking in the water! Also don't know if they were male/female or male/male. But in any case, they were rolling and diving and occasionally snorting. I waited to get in the water, as they were at first in the deep part; then they easily rolled into the Kiddie pond. And eventually, rested up on the island: 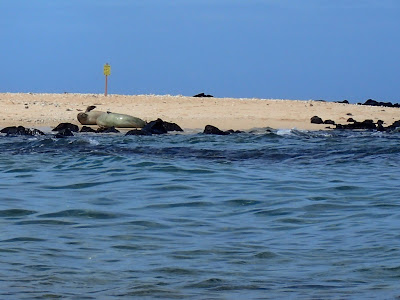 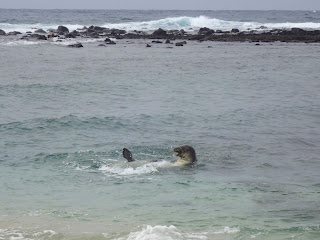 I can easily picture them communicating with each other. The other part is how fluid they are in the water and how big a contrast it is when they are on land! They are definitely athletes. They just move and hump along when on the sand. In the water, they are like bullets.

I was able to spot one octopus...yay! 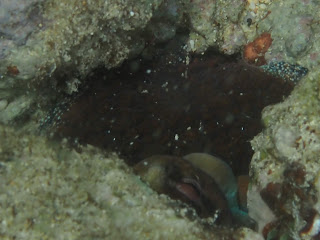 You can see a bit of the siphon, but also its eye... 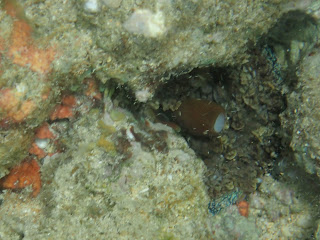 The siphon again..and the bumpy brown and tan stuff around it is the octopus body. I'm still amazed how they can not only make their skin change color, but change texture: bumpy to smooth in an instant. This was a young octopus. It didn't seem too worried that I was there.

I also was treated to a surprise flounder. (Well, I guess they are always a surprise, really.) 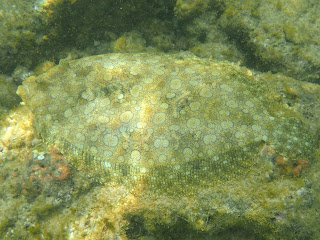 It seemed strange that it kept going to the top of the rocks, but then I realized that there wasn't any sand on the bottom nearby, so its preferred place for blending in wasn't available. 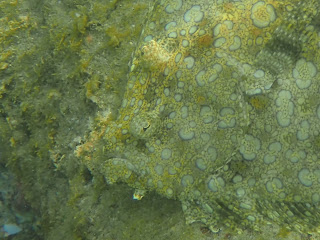 This one shows the eyes and the mouth.
Forgive me if I've mentioned this before, but they are born (hatched?) with one eye on each side of their heads and one eye migrates to the other side. So amazing! 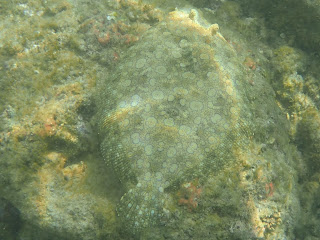 Look at youtube under octogirl7 to see the flounder video.

I took the movie, knowing that my usual experience is that animals only move when I'm NOT ready to videotape them. So this flounder sat still for a minute, then took off. I think I was annoying it with my filming..... 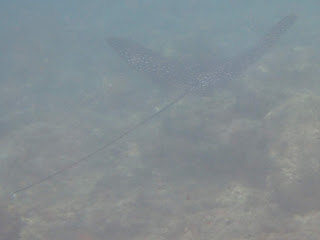 It apparently saw me right away, or was flying through anyway, as it didn't stop to find out what I was, but just flew through. They are quite pretty: nice white spots on their backs. Unfortunately, this was taken out where the waves break, so the visibility was not great, and filled with bubbles... 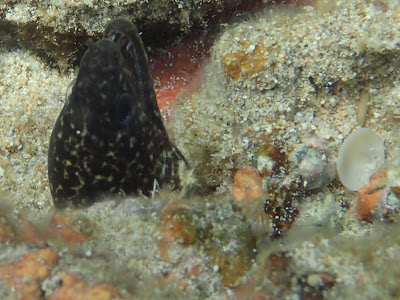 You can see the eel's teeth and eyes in this one. They do a great job of looking menacing, don't they? 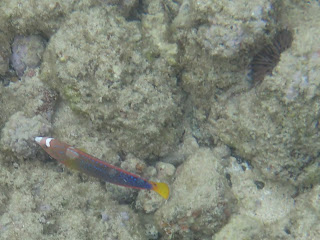 This is the juvenile Yellow Tail Coris, in the in-between stage. See the younger one below, with all the red and white coloration still going on... 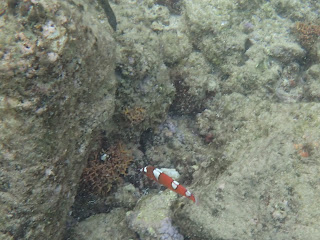 Sometimes trash is something odd: in this case, a marble. I also found a penny and a ring. Not a great ring, so it's in the trash. 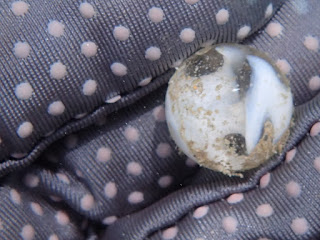 This seal was about to cross over to the shallower side.. 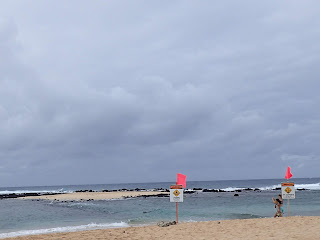 And a shrimp was pushing the purplish thing out of its way. I don't usually get to see their claws this well. They make circular tubes to hide in. 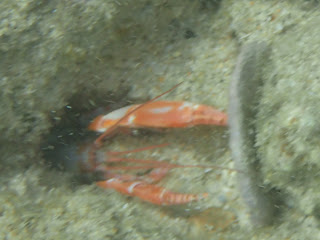 A nice swim. I'm waiting for winter, when the water should calm down some. But a nice snorkel anyway. After all, there was an octopus!