I have often wondered why we say God is Good, instead of God is Great! Seems like the ruler of the universe should get a more enthusiastic applause.

Heard in church from a guy who is working in Africa. Suffice it to say, I can't imagine living and working there.  He has to kill and gut his own chickens! Ewww. I know it has to be done (no one wants to eat feathers), but I would prefer not to be the one who does it!

All that to say he spoke about God and how creative He is! And I so agree. I see evidence of His creativity every day, but especially when I swim.

And so, on to yesterday's swim! 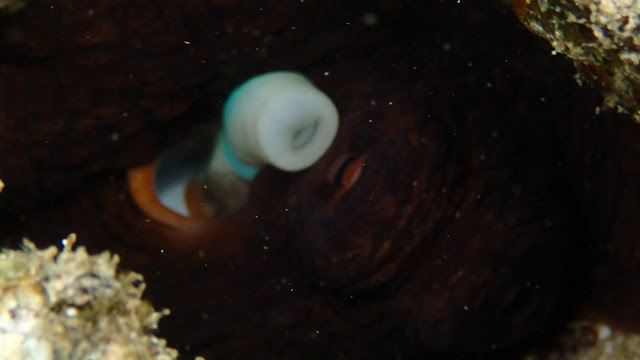 Above is octopus #5! (and can i just say Woo Hoo!! so exciting to see that many) The octopus is showing his siphon and the lovely aqua color at the base of the tube. It is on the way to closing the siphon, before opening it again to take another breath.

Just below and to the right is its eye. Never again when you see an octopus drawing will you believe its eye is the same shape as ours! It's a cool slit. I should read up on what we think an octopus sees. I do know they are smart. And below and to the left of the siphon is the part which also closes and opens in the breathing process.

Obviously, this octopus wasn't too thrilled with my presence, as it has changed to that angry maroon. It hadn't thought of the practice of blowing water at me to get me to go away that I experienced with some octopuses on Oahu. I'll bet it will before long.

This octopus was found in the Kiddie Pond because a Bluefin Trevally was circling. Mostly over here, that means there's an eel below. The Trevally is interested in something, so it circles until the something is either more exposed or it gets frightened away by a large mammal swimming over the same area. I'm kinda glad that I was able to help the octopus in this way! A human bodyguard. That's my job and I'm happy with it. ha. And in this case, it was a hidden octopus that piqued its attention. 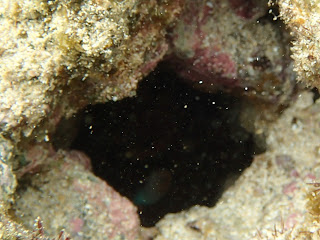 You can just barely see the siphon at the bottom of the octopus above. Good hiding place. 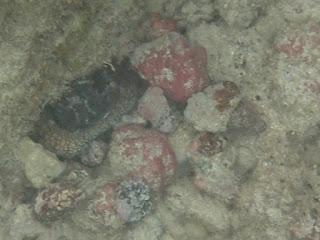 You can sometimes spot an octopus by looking for the rocks arranged outside a hole. It moves the rocks around, arranging its den just as it likes it. It's my theory that they put a rock in the mouth of the hole when they go hunting. As a Stay Out! sign.
In other areas, the octopus blows out shells of animals it has eaten, and that's a way to tell there was an octopus around. You ask yourself as you swim: What ate that? And where is the predator now?! 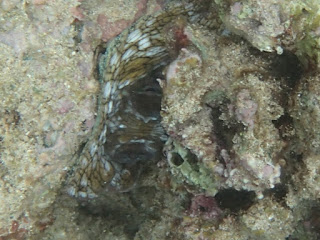 The predator may be resting between a coral head and a rock. The brown circles are its eyes. 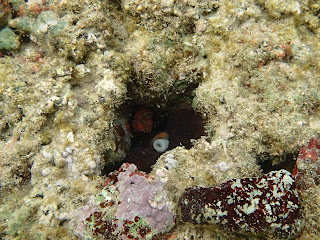 This is another shot, from farther away, of octopus #5. One wouldn't think to look inside a hole, but again, the Trevally gave its presence away. Most visitors/tourists would just speed past this hole, not knowing what's hiding inside. If I had just a few words of advice for them, it would be Slow Down and look! 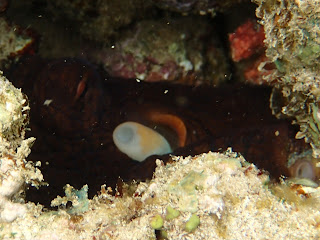 The siphon again, from a different angle, with the eye up and to the left. I do think the octopus is quite amazing. Blue Planet II, Green Seas will show you more.. 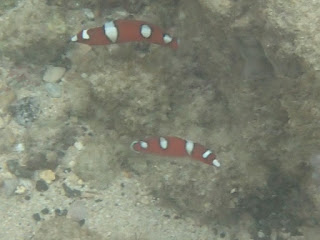 This is the Juvenile edition of the Yellow Tail Coris. The adult fish is totally different. Well, I should watch what I say! The adult has the same shape, but the colors are totally different. Quite lovely in either case. And yesterday I was gifted with two of the little guys. They, like a lot of fish, are quite quick, so it's thrilling to see two at the same time and in the same frame. 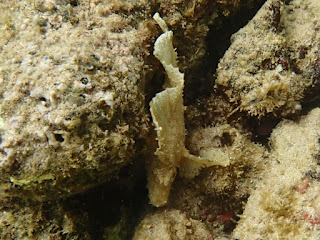 My "regular" Leaf Fish. This was quite a shot to catch, as the tide was low and parts of my dive bags wanted to catch on the rocks. But I found the little fish. He has his head facing down. His left "arm" resting on the rocks. These poor fish as so light that they get blown about quite a bit by the waves. And it doesn't help that their dorsal fin is like a sail! 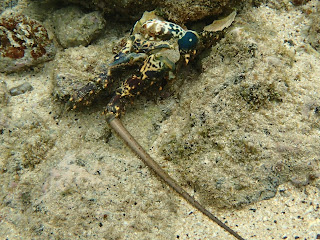 Somebody had lobster for their breakfast. No one had to boil it to eat it...Wonder who did eat it? 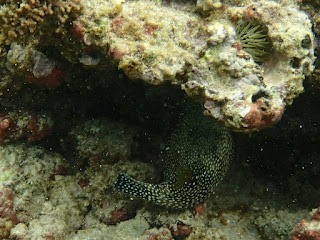 The little puffer tries to hide. This one, as often is the case, seemed to be in a brooding mood. So I snapped a picture and moved on. And so did the Puffer. I think it might be a Guinea Fowl puffer, but I could easily be wrong. 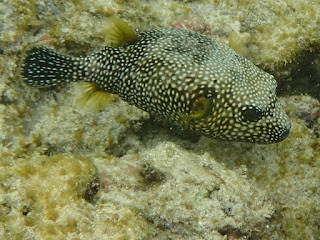 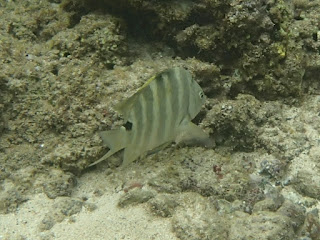 Below is the Black Leaf Fish that was also being moved around by the water. 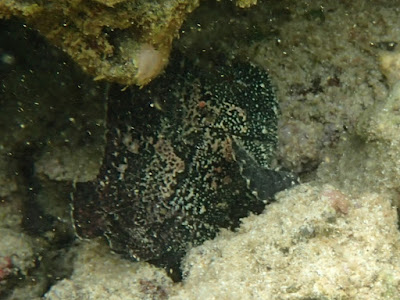 You can see the "arm" fin splayed. And if you look really closely, the eye. They have those cool Scorpion Fish eyes, kind of red and almost translucent. 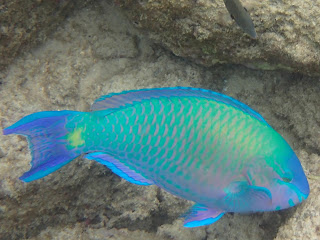 Just another lovely! Parrot fish. I found myself wondering if the Ciguaterra disease also impacts the fishes that have it, or if it's just something that impacts those who might try to eat it. Just another thing to research in my copious free time. 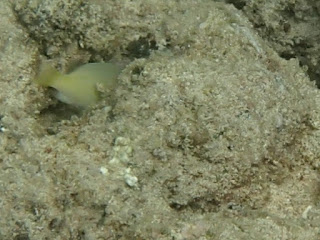 This Brighteye Chromis was exiting to hide. This is the shot I mostly get, since they are so quick: their tail as it disappears into a hole. I've been seeing quite a few of these, in the really tiny edition. I mean tiny like the nail on my pinky finger. And they are just as quick as their parents. 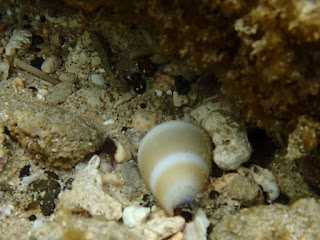 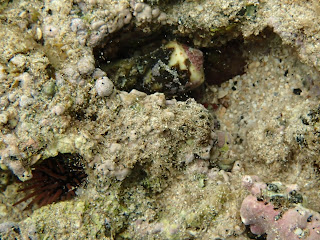 And another one, hiding too. 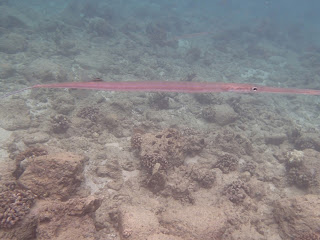 The Cornet Fish appeared just below my mask and sped through the scene. They are so long that it's hard to get them into a photo in their entirety. 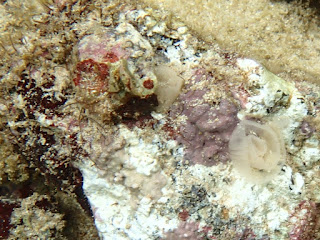 An interesting rock. Note the white circles on the right: I think that those are eggs of some sort, left to grow and hatch when they're ready. Perhaps nudibranch eggs. 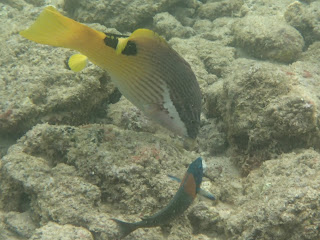 The yellow fish is a Hawaiian Hog Fish. One of the pretties of the reef. And a Saddle Wrasse. It looks as if they're going to collide. 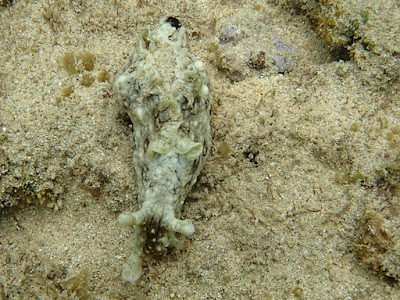 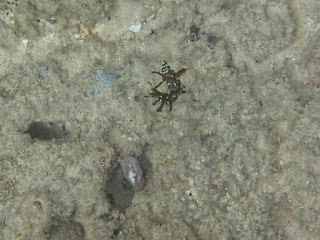 The juvenile of the Rock Mover Wrasse. I kept the photo this size, so you could see the hole and the lavender rock above it. That say's octopus to me! But I didn't see one in there.. 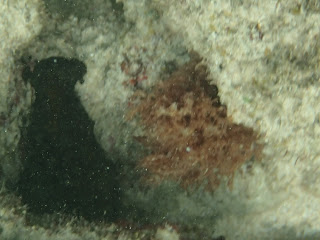 The brown blob might be a different kind of sea hare. 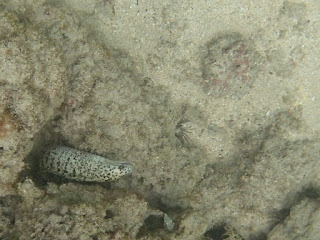 The one and only eel I spotted yesterday! Just chillin'. 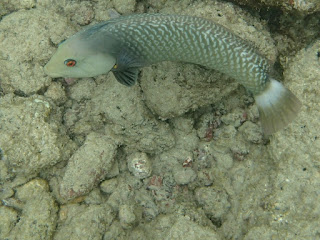 You can see the adult Rock Mover Wrasse here. Note the red eyes. I think their color pattern and mode of quick swimming and moving rocks with strong jaws is amazing. 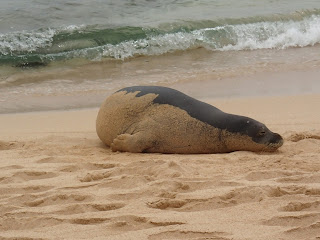 Mr. Seal taking a nap. That sand on me makes me itch! Apparently, it doesn't usually make them itch. I do enjoy it when they wriggle up to move on the sand. Totally different than their fluidity and gymnastic abilities in the water. 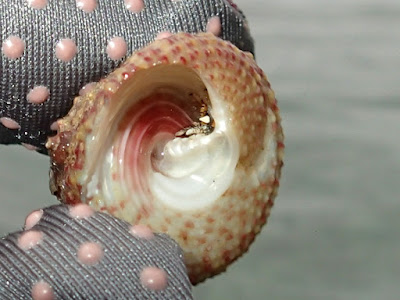 I found an intact Top Shell. But there was a crab using it for a home, so I had to leave it there...This is a shot from the bottom. If you look really closely, you'll see two crab legs. (The legs are whitish.) Hardly enough for a meal! 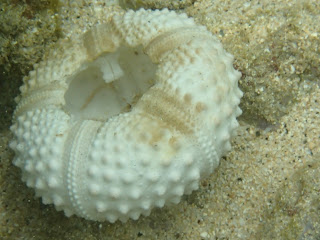 And last but not least, the remains of an urchin meal. I would have brought it home, but they tend to break very easily. Pretty though, non?

Props to God for the safety in the water and all the cool creatures. No one could do it better.
Posted by octopigirl7 at 8:54 AM