After swimming for 3 hours....

After swimming for 3 hours, boy, was I pooped! I went for a short walk with my friend, blasted off home, and dropped like a hot potato for a nap! Work, radiation, swimming, boy that can tire a girl out! (OK and now I will stop with the !!! marks. ha.) 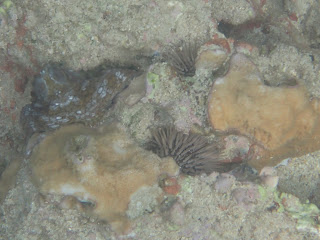 There's the octopus on the left. The brown and white. 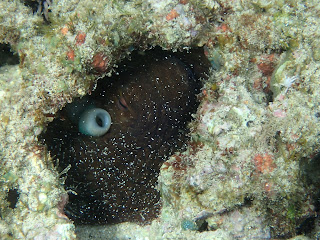 And here's #2, showing its siphon.
I was so relieved to see #1 I was thanking God through my snorkel. I think I had been searching for about an hour, beginning to think they were all hiding somewhere else.
I saw some very cool shells: 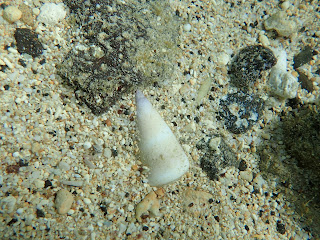 A few Cone shells, buried in the sand. 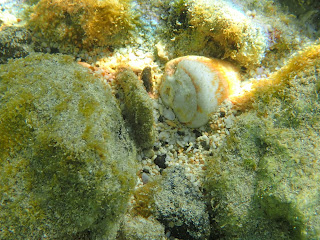 And behold! The mighty Turban Shell! With its protective operculum still intact. I was so thrilled to find this...I pick up a bunch of the opercula after they are already out of the shell, so it's nice to see one still doing its job. (It's like a trap door that protects the animal inside from invaders.) (Like hermit crabs.) 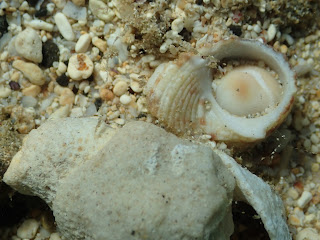 Another shot with the sane showing more. Sand is kinda fascinating, at least close up! 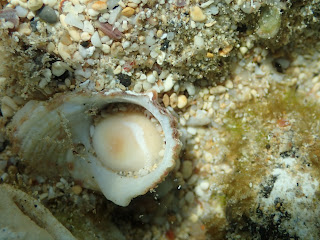 And here is the amazing Raspberry Drupe shell. If you look closely, you can see the animal inside the gap there. Looks like it's between teeth, doesn't it? The back side is all that raspberry color. 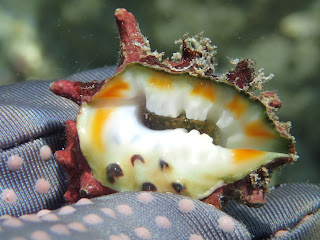 These two trevally were circling and I found out what...look below for the white mouthed moray eel. 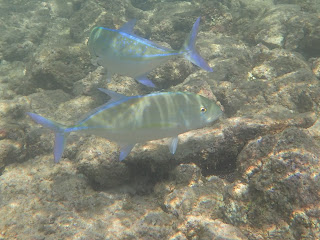 This Pencil Urchin seemed to be trapped by rocks... 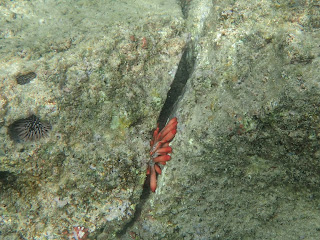 Needle fish, Sgt Major and of course, many goats..As you can see, quite shallow here. This is where the deep side meets the kiddie side. 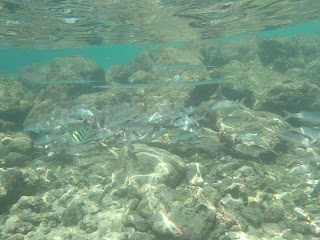 Below, an Achilles tang. If I were more energetic, I'd look up why they call it that. But I'm not...energetic, that is. 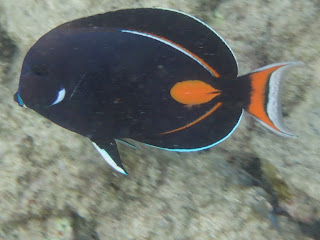 A very nice Ambon Puffer. This is my fave type of all the little puffers. Note the pretty green eyes and patterns of dots and lines. 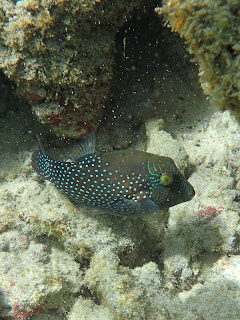 Nice clouds! Of course, there were tons of people below the clouds, on the beach, but I cut them out. 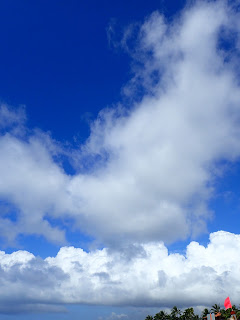 Here's the eel I mentioned and the trevally circling it. (Sometimes they circle octopus, so that's why I always try to see what they are interested in.) 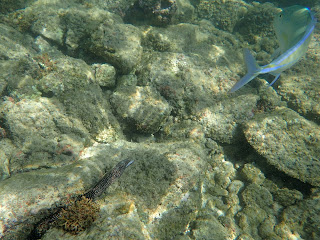 More goat fish and sgt. major fish. They seemed to try to blend in, but didn't. 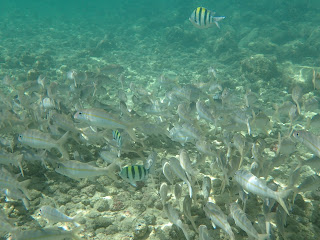 I call the photo below Gymnastic Abilities! Looks like the lower Moorish Idol is dancing on its tail, doesn't it? I must say too, I am somewhat of a heavyset woman, but I feel positively ballerina-ish when in the water. I can contort myself all kinds of different ways, without gravity grabbing me. 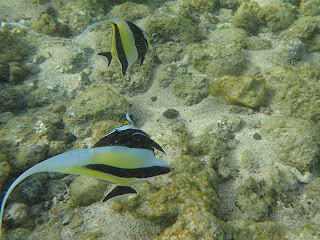 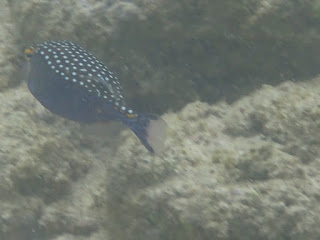 Early morning light and clouds. And of course, palm trees. 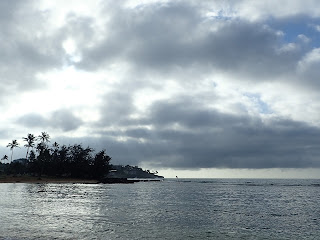 It amazes me that I see these orange shoulder surgeon fish so often, but today the purple on their heads really caught my eye. Quite lovely, don't you think?! 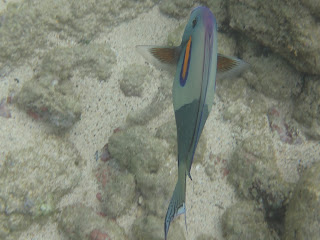 Here's the trapped Pencil Urchin again, closer up. They are so pretty and they make a very  nice contrast with the grayish rocks. And I just noted the covered up Drupe shell above it...look for the bumps.The other strange thing is that once the pencils have dropped off, they turn brown or white in the water. totally losing the redness. 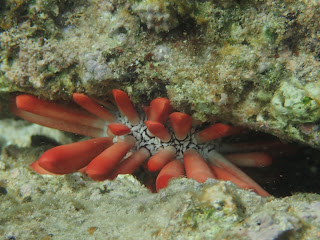 Snowflake Moray eel. Just trying to scoot around without being bothered. I also saw one hiding in a hole near the beach....no picture possible because it was too dark in the hole, but it definitely saw me. 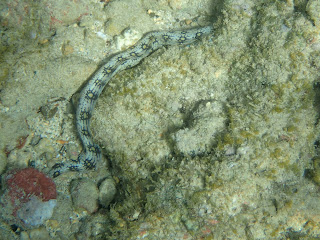 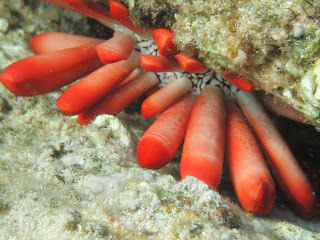 This tiny urchin covered itself in stuff. 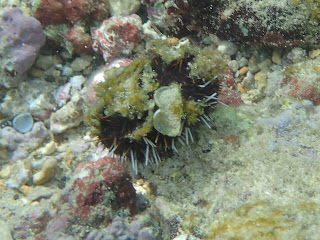 Quite a nice swim, even if it did tucker me out! I am also thankful for the more calm water..and warmer temps.
Posted by octopigirl7 at 7:55 PM