Wow! My fellow photog on Oahu took an awesome photo of an octopus today! It kills me not to be able to show you, but I don't have his permission to show it. He makes some $$ with his photography, so trust me, it is great! Awesome and wonderful, too.  It was an adult octopus and showed its eye and siphon and some of the body and the suckers.
I myself saw a surprising 3 octopuses!  The water on the deeper side in Poipu was kick-tail gnarly.  The normal current that sweeps you down toward the Waiohai was really a lot more forceful today.  As I was swept along and eventually kicked out of it, I thought: OK, God! Are you trying to tell me something?  So I swam around near the rocks, where the current isn't as bad, but the waves were strongly coming in too, so after I saw octopus #1, I got out and took a few pix of the seal and then went into the baby pond. About an hour later, the lifeguards closed the deeper water part of the beach.  Good timing! 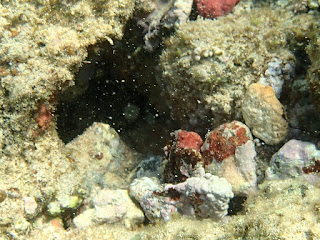 You can see that the water was stirred up.  Look into the hole and search for the white blob...that's the octopus' siphon. Still counts as an octopus find!

And the seal was snoozing. 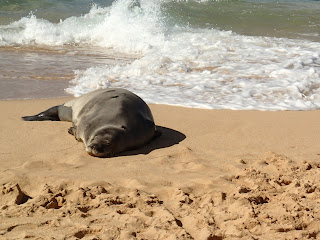 I am a bit worried about this guy...it seems there's a gouge of some kind in his neck, but I didn't get close enough to really tell. My pal will walk by to check on him this afternoon. I didn't notice the gouge until I looked at the photo at home.

These 2 Barred File Fish looked to be having an argument: What did you say about me?!?!? 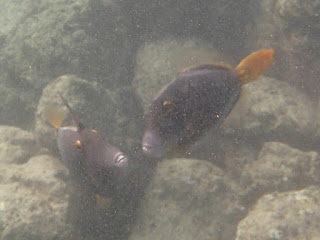 Doesn't it look as if they are discussing something?  A few seconds earlier, they were circling around each other.  I'm thinking two males fighting over territory. But I could be wrong...they may have been talking to each other, but I was not included in the discussion. Go figure. 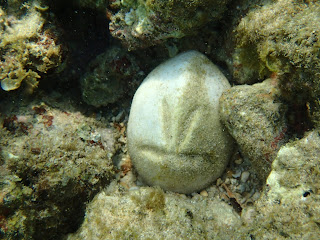 I think this is a poufy sand dollar, but not sure. Of course, I didn't pick it up.
Sometimes things like this are so fragile, that picking them up can break 'em apart.
And a cute little Bright Eye Chromis: 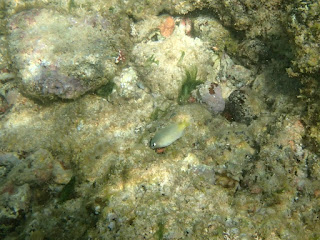 They are just so adorable.  And I always enjoy it when I am able to "catch" one like this.  They are really quick and dart away with the least provocation.

And the surprise was octopus #2...I thought there might be an octopus in this location, but didn't actually see it until I looked at the photo when I got home: 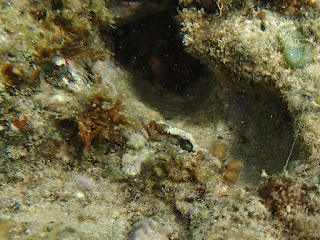 Yeah, he's hiding in there....see what I mean? Really hard to see. You can imagine why I didn't see it when I was still there.  But it was a good place to find one: it was able to hide. 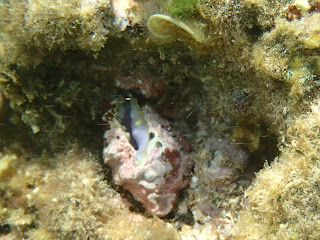 Drupe. Covered in goop. but you can see how the inside of these shells can be quite lovely.  A delicate purple color.


And a Cowry shell: 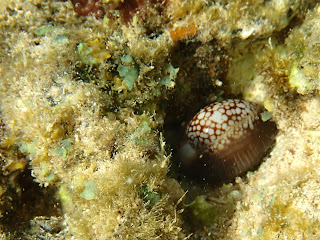 I do enjoy that they hide this way, away from grabby hands.  I still do try not to pick up any that seem to be still inhabited.


For my sweetheart: a box fish: 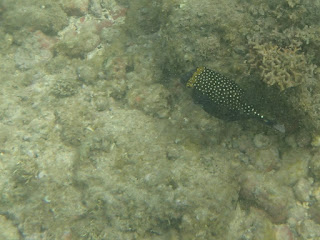 And also for my hubby of almost 19 years, some palm trees.  Added clouds for me! 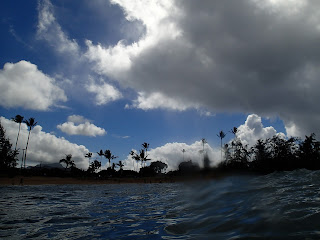 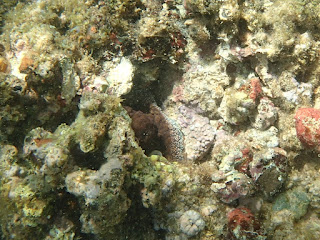 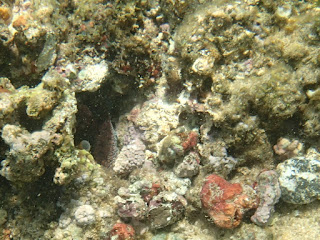 I was seriously chuffed when I saw this one..it's the same one that I have seen a few times before....
A juvenile Rock Mover Wrasse: 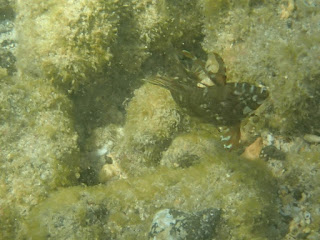 Wouldn't you think it's seaweed?
And this is some kind of crab....in a hole that should have housed an octopus. 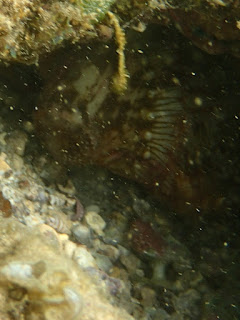 I am sorry to report I can't remember the name of this type of crab...but really, I'm only interested in crabs because they help feed my octopuses! ha.
And because I just "re-found" these pix, I'll include them...from our time on Oahu: 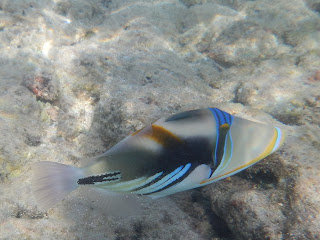 The Lei Trigger.  For some reason, I don't seem them over in Poipu very often. I do think they are much prettier than the normal Humu. 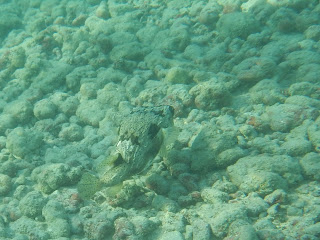 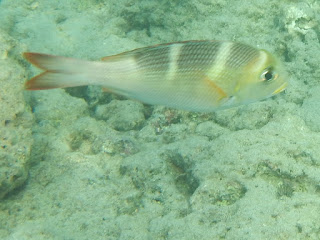 Big Eye Emperor.  I don't see those over here either. Maybe I'm just not deep enough.
A great swim...even with gnarly waves.  Still saw cool stuff and my octo-pals. Thanks, God!