A two octopus day is a good day! Especially since last week, all the octopuses were hiding on Sunday.  Glad they were back today. 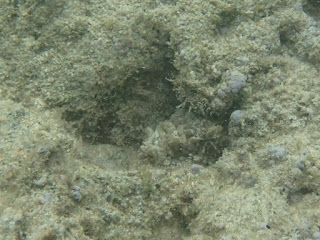 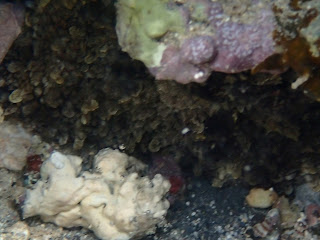 I'll forgive you if you say they are hard to see.
#1 octopus was hiding so well, that I came back to see it 2 times and could only find it on the 2nd try. I don't know if it left the area for my 3rd try, but I couldn't see it. It does blend rather well, wouldn't you say?
#2 was hiding in a hole. I search all along the shore and sometimes I am rewarded, as I was today. I love how they can make their skin bumpy. It helps them blend in even better.
There was a seal napping: 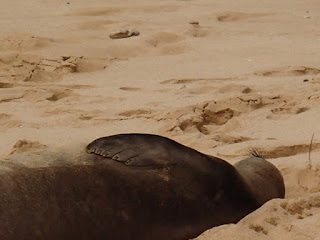 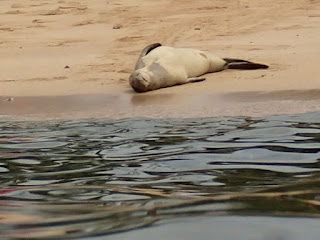 I cropped the top photo because you can see its "hand" with fingernails! and same seal a bit later, having rolled onto its back. I love seeing their golden stomachs. By the way, and you'll be proud of me for this, there were 2 guys who thought it would be a good idea to walk in the water in front of this seal. See how too close that would have made them?  And I didn't even blast them! I really wanted to, but they did move on.  Good for them. At least the seal didn't seem to care. They were breaking the law, though...there's a distance limit.
Now for the toughest fish in the sea...well, my part of the sea, anyway: 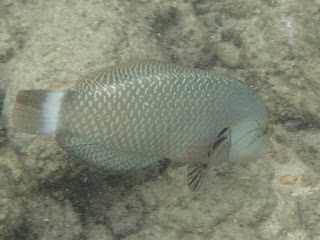 It's the Rock Mover Wrasse.  These fish pick up big rocks and throw them about with their jaws.  It is unbelievable. This one appears to have a rip or something above its gill slit, so I hope it's ok...they often lead me to octopuses, so I hold them in some esteem.
Stripes: 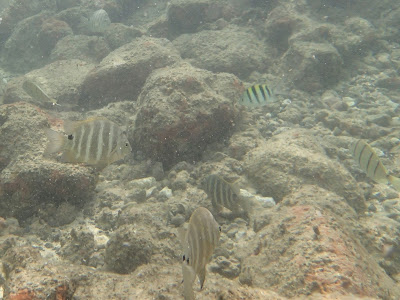 This one has 3 types of striped fish: the abudefduf on the left and bottom, the sergeant major, near the rock in the middle and the Convict Tang on the right.  All up and down stripes, but they look so different! 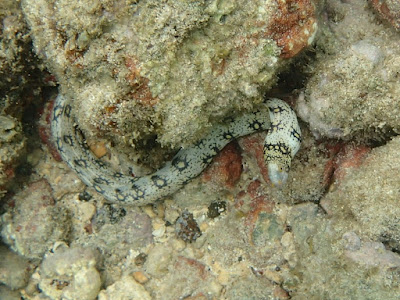 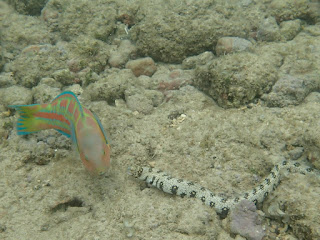 I'm including 2 eel photos. They are different eels, but the same type.  I thought the one with the Christmas Wrasse was cool...the wrasse had been harassing the eel, darting all around it.  This looks like the eel might make it pay. They ended up separating, but it could have been ugly.
I think these are sponges: 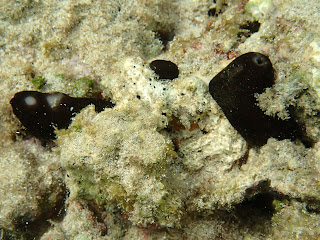 The part on the right had a hole in it, which made me think it's a sponge. If you know better, please let me know!
A pair of my fave fish: brighteye chromis: 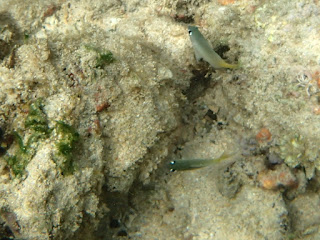 Aren't they just so cute?  So quick. And nicely colored..

Here's a cone shell that was hiding in the coral: 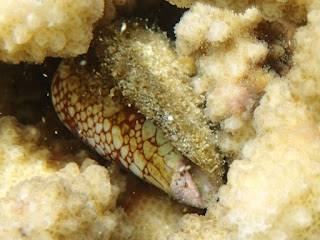 I have been surprised lately when I peer into coral: sometimes there are shells hiding, sometimes crabs.  (Oh and by the way: if you get a chance, look on youtube for Lembeh Strait...it's in Indonesia and they have amazing underwater animal videos. And yes, there are octopuses...)
Cowry shell: 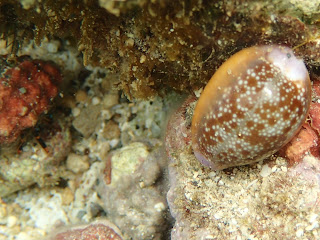 Now isn't that a pretty little shell? I didn't pick it up, but assumed it was in use. And I missed the mulberry drupe shell on the left until I got the photos home..
Christmas Wrasse again: 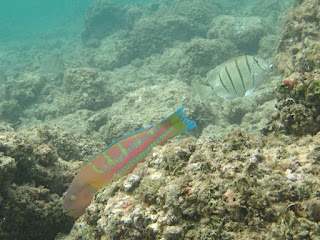 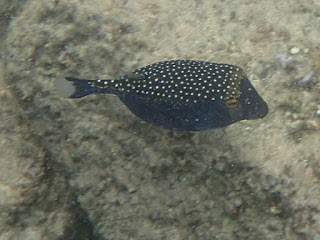 A very nice male trunk fish.  I saw a female too, so they are happy in this water.
And last, but not least, a blenny, poking its little head out of a hole: 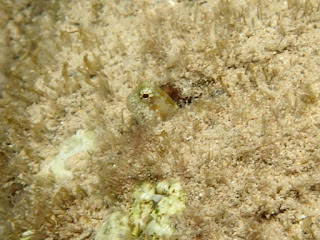 Camouflage almost as good as the octopus's!
Thanks, God, for a wonderful and safe snorkel.  When my friend and I were leaving, the lifeguards were closing the deep part of the beach, due to high surf and swell.....glad I got in my swim in time.