wow! chips are loud when you have your headphones in

Wow! I found out that potato chips, especially kettle chips, are loud when you have your headphones in.  And when you have your new job on your mind, things crop up when you have down time. I was tired after swimming, but couldn't fall asleep...
I am still very much enjoying the new job at National Tropical Botanical Garden. I have been trying to take a new flower photo each day, just as a remembering device.  How did I do? 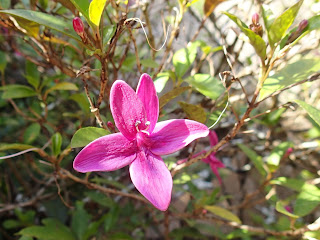 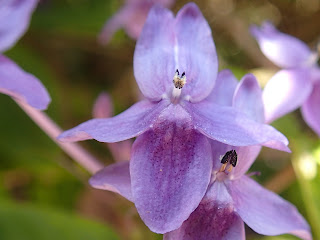 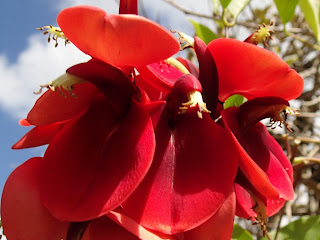 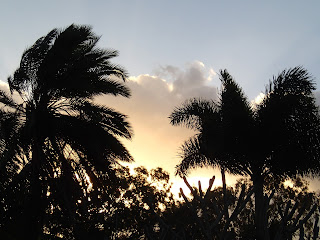 Of all the pix above, click on the purple one.  I call it Purple Pollen...you can see the pollen on the plant, working to have new plants.  Isn't God's plan amazing?

I caught a bit of morning light this morning in Poipu too: 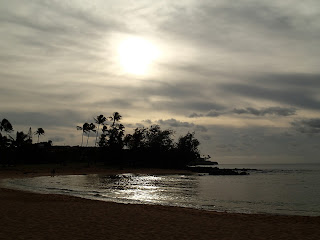 Don't know if there was pink before I got there, but I felt this was pretty, even pink-less.
I have been waiting longer to get in the water because of waiting for others to get there.  I met a nice lady today, who had the same thought.  She said she wanted to go in, but not alone.  Wise girl! I told her I would watch and that she could watch me too.
The water was more calm than usual, but it had odd places where I got really cold.  And then there would be warm areas.  It wasn't tied to the depth of the water, which surprised me.  But it was all good, and the proof was 3 octopuses!  Two were quite well hidden, so I'll probably show you just the 3rd one, which was on top of a rock and easier to photograph. 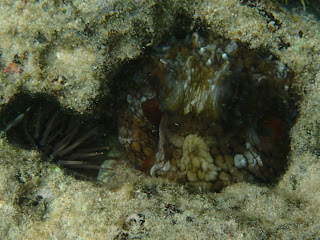 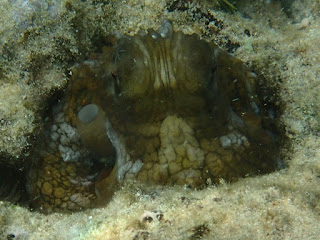 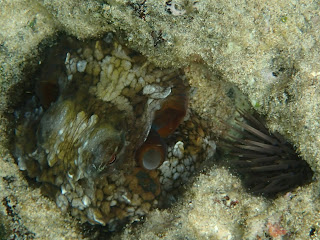 I liked this one with the urchin appearing to pester the octopus.  I think they are very adaptable and can put up with almost anything.  Look at my youtube videos (octopigirl7) and see any where the octopus snaps at the trevally...It's almost as if it snaps its elbow at the fish to make it go away.  Doesn't work, but I smile at the attempt! (Look also for the Frogfish eats puffer...I've had 1400 views! Not quite viral, but still...)
I found a black cucumber, covered with sand and also with small white shells.  I thought it was odd enough to photograph: 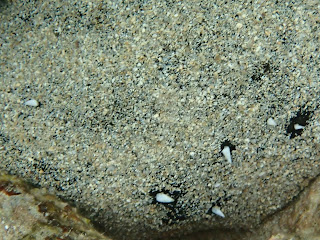 This is a cropped photo, but the animal had a total of 7 white shells on it.  I guess they were either eating it or using it as protection.  Not sure.  Like the octopuses, it's so hard to get them to converse with me.  HA. 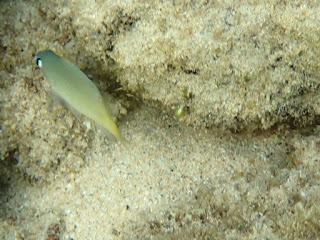 Here's a Brighteye Chromis.  Love these little guys!  and when I say little, this one wasn't, compared to the others around these days.  There are many little ones, new ones, that are about the same size as my pinky fingernail.  So adorable.
There were two peacocks: the grouper: 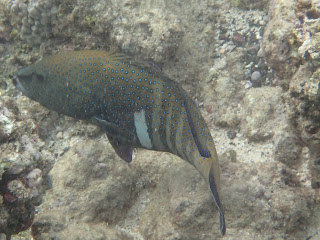 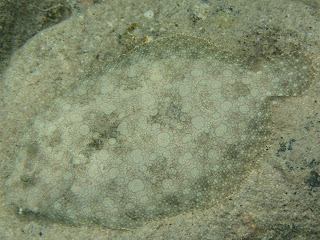 A very obliging animal, this one: it was already posed on top of the rock.  All I had to do was roll up on it and snap a shot!
And that's a bit of trouble today: number 2 backup camera was having a "card error." NOT what you want to see when you're about to get wet.  So I ended up leaving it in the car.  Which gave me a bit of stress, as I always love having a backup camera.  Just in case something goes wrong.  Which can happen, especially in water.  After all, if your battery goes down, you can't change it underwater.  Well, I guess truthfully, you CAN change it, but that would flood your camera.  I should be precise.
But we visited Costco and found a Fuji camera, so we'll see how it behaves tomorrow. I will let you know. I am spoiled by the Olympus, but if it's gonna fail, why take it in? Olympus Tough TG-2 is a great camera, but they aren't selling them anymore.  Drat: why change what isn't broken?!
Today's box fish for Alex: 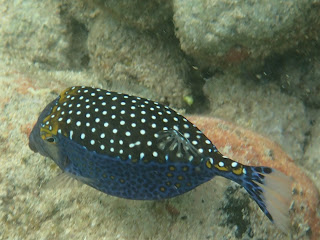 You can see that it was watching me.  I guess I'm still big and scary.  Considering how this fish is only about 3 inches long all told, I can understand how a 5'4" woman could be intimidating.  There was also a Hawaiian Cleaner Wrasse duo, working their magic on some Convict Tangs: 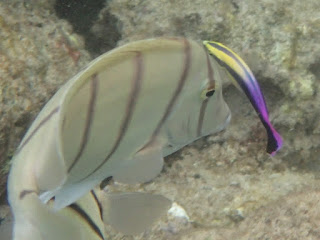 I think of it as my haircutter shampooing my hair yesterday: cleaning things up! (The other Cleaner was cleaning elsewhere in this photo.)  I have seen these little fish go inside the gills of fish.  That would take some serious trust.
There were some Rock Mover Wrasses, even the smallest one that I've ever seen.  But first, the small ones...I'll get to the incredibly small ones.. 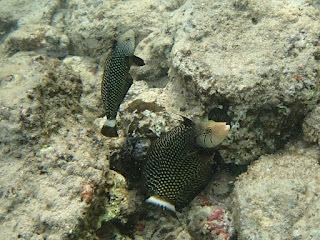 They still remind me of clown faces..
I do not know what happened to fish #3...there were a trio last week.  My optimistic mind wants to think that it swam off into the big pond further out, looking perhaps for Dory or Hank, the octopus. You can imagine I loved the recent Dory/Hank movie.
Now here's the Rock Mover Eagle Eye challenge: 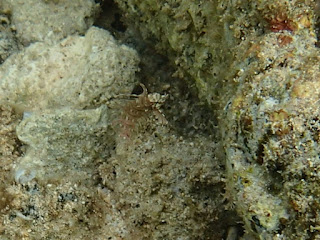 Yeah, see what I mean?  This one was probably, maybe, possibly 2 inches long, tip to tail. And moved JUST LIKE SEAWEED, so it's really hard to see it, even for this photog who was taking the photo.
Urchin: 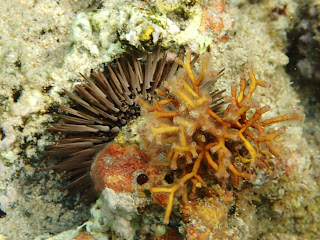 Pink urchin and a bit of seaweed, accompanied by some orange rock.  Sometimes the photos just out and say: TAKE THIS PHOTO, PLEASE!
Urchin and a Drupe shell: 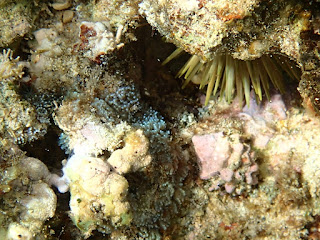 In this case, the Drupe is pinkish.  There's blue coral to the left and the urchin above. Everyone is apparently getting along....of course, at night time, it will be different.
Maybe someday I'll go in at night with a companion and see what all these animals get busy doing. And the following is the Cowry I Left Behind: 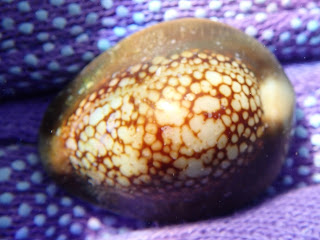 I just couldn't tell if it was empty, so I had to leave it behind on the sea floor. Darn shame, as it was in pristine shape.
And a Triton was doing a great job of hiding underneath a rock: 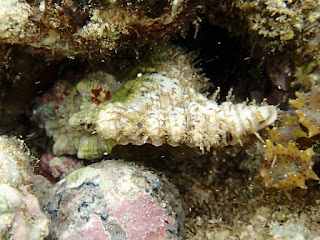 I would LOVE to have picked this one out of its spot to see who was inside, but hate to disturb.  Perhaps the shell animal itself was still inside.  But even if a crab was occupying, it was still a home and should be left alone..
And one of my fave photos from today: 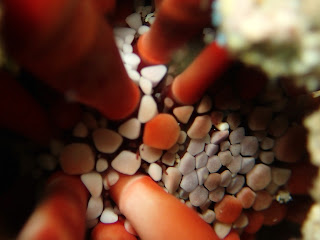 Gosh, isn't that pretty?! The red pencils, and the little bits, like buildings, in between.  I shall have to look into this, to see if the other parts are pencils growing larger, or what.
And to cap things off, a Leaf Fish: 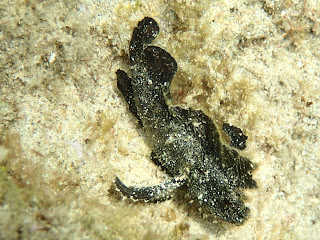 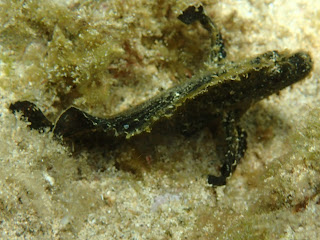 This black Leaf Fish sat still on its rock.  Didn't care that I was there.   I wonder if it can change colors immediately, as the octopus can.
And a cute little snowflake eel: 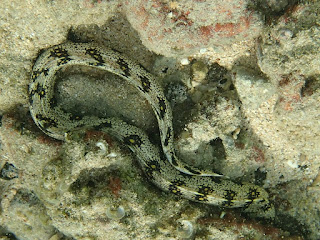