It occurred to me that I hadn't posted recently, due to not snorkeling, due to hurting my shoulder.

Recently, during my last snorkel, I had the bead on a scorpion fish.  Cannot let that go undocumented! So since the current was kinda strong, I held onto a rock with one hand and took pix with the other: big mistake!

The shoulder wasn't sore immediately, but boy, did it kick up the next day.

On the advice of a friend, my personal trainer, ha, I iced it.  And then since I do have medical insurance, thank God, I made an appointment to have it looked at.  They are talking rotator cuff issue....oy vey.

Thankfully, I was prescribed an anti-inflammatory drug, which has tremendously helped.  My doc said she expects it to fully heal on its own and is also giving me some physical therapy, to make the area stronger. Thus avoiding this same problem in the future.  NOT that I would ever hang onto a rock again.  That was just dumb. (What some people won't do to capture a photo!)

I have noted, over the past week, a couple of things about my blog: 1. I miss writing it! and 2. There is MUCH more time available in my day when I don't write.

Because writing it involves not only the swimming and taking photos, but also at least an hour looking at the normal 300-500 photos, choosing the good ones. Then the actual writing and uploading of the pix. Who knew?! 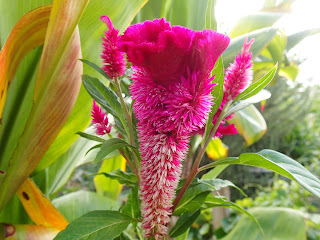 Isn't this the prettiest, yet wackiest, flower?  I have never seen the like.  Very lovely yet so oddly shaped.

And this one made me wonder if some gardener/botanist has been putting a couple of plants together to make this one: 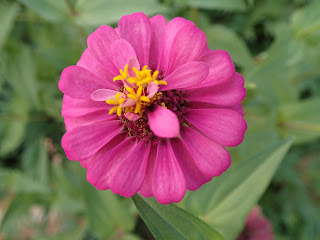 Really, I couldn't think this lovely flower up.  And regardless of whether you believe in God as Creator, you gotta admit this is quite a wonderful flower.  Busy, yet nice balance. 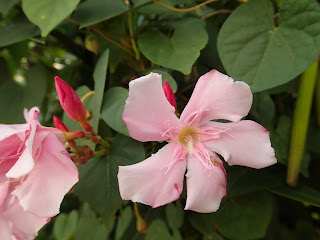 You will remember this nice pale pink flower from previous posts.  Older ones getting a bit frayed around the edges, but the new ones just bursting to pop out and make their statement.

And speaking of statements, first let me say that the leg attached to this sock isn't incredibly hairy, just incredibly oddly tanned: 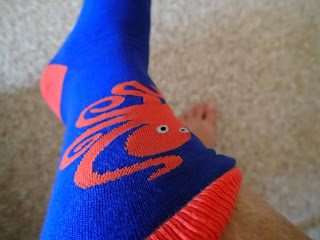 Did you really think we could get through an entire post without an octopus making itself known?!
These socks were a present from our pals in Boston. It still amazes me that there are so many items that feature octopuses.  I guess I'm not the only one that think they are really cool. (Or what is the current term?  Phat?!)

On a more serious note, we have heard on the tv weather that there are some storms coming our way. Of course, I am praying that they miss us. But we dutifully went to Walmart to pick up some emergency supplies: paper plates, batteries, extra flashlights, food, candles, and of course, beer and wine.  Since I was here on Kauai for Hurricane Iniki over 20 years ago, I remember strongly thinking that the things I missed most when the power was out were hot showers and cold beer!

I'm not so much into beer these days (all those carbs!!), but we each got one of those huge cans of Fosters just in case.  They are duly in our fridge...hopefully for a long time due to not needing them.  If you do pray, please do so for the storms to miss everyone and just fizzle out over the ocean.  After all, I do not need the octopuses to be stressed out.  Or myself either.

I will tell you a couple of "good" sides of tropical storms, though, at least this was true after Iniki: more shells on the beaches from the water being stirred up and some nice breezes!  I will never forget someone at the Hyatt, where I worked at the time of the actual storm coming through, opening the door of the hotel and seeing a wall of steamy, wet air.  And of course, the idiots who ignored warnings and went surfing in the monster waves.

And as hubby and I went for a nice walk yesterday afternoon, it occurred to me that since you weren't with us, you wouldn't know about his shirt: 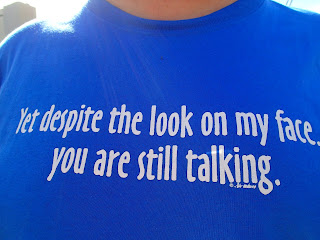 I must tell you that both he and I have a slight tendency toward sarcasm.  After a recent church service in Kalaheo, I told a long time friend that I really enjoyed the service. Her response was to look at me. I said: What? She said she was just judging whether I was being sarcastic or not.  So it proved to me that perhaps I can tend toward sarcasm too often.  So that's my new plan, to keep the sarcasm between the man I married and myself.  Perhaps I'll go for real humor with others instead.


Have a great week!  I am off to search for that God-appointed job for myself. Stay safe and sane.