It came to my attention today that questions which appear stupid to me are not actually stupid: if one asks where I saw the octopus, I think they may be thinking there is a regular place that the octopuses congregate. Which of course they don't, but when you don't look for octopuses on a regular basis, you might think to be able to find them where you last saw them! Am I making any sense?

And there is a regular octopus, which I saw today, so I guess I could have said: Down there near where all those goofy people are standing in the water! 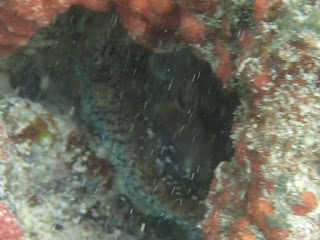 I included the photo above because it shows the eye, siphon, skin colors and even a bit of tentacle. And of course, sand blowing through the water. Not only was it later in the day than my usual swims, but the waves were choppy and people were walking around on the bottom. A big no-no for me. 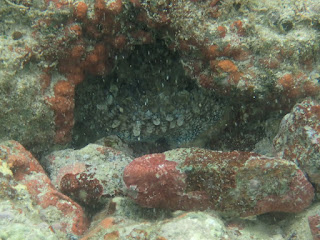 And the one to the left shows the bumpy skin and also a bit of tentacle. This is an octopus that has been hiding in this rock for a while...hope it stays! It was the only octopus that I was able to spot today, in my one hour swim after church. 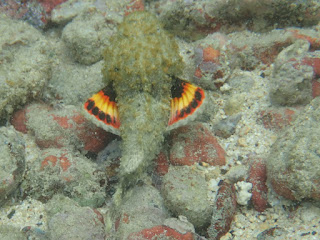 This one moved to get away from me, so you can see the warning colors on his side fins. 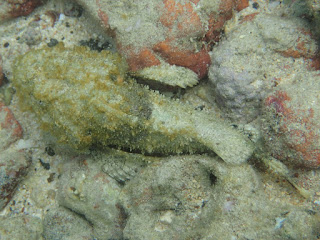 And here's the same fish without the warning, as I first saw it. Really good camouflage, non?

And as I was swimming over near where you can go over to the deep side, I saw a man, his wife and son swimming near me. The man was actually "walking" with his hands, grabbing rocks to pull himself along. When they popped up, I gently tapped him and warned him about scorpion fish in the area and how they were venomous. The lady shrieked a little bit, but the man wasn't phased....I swam on. And then about a minute later, I saw the 2nd Scorpion Fish: 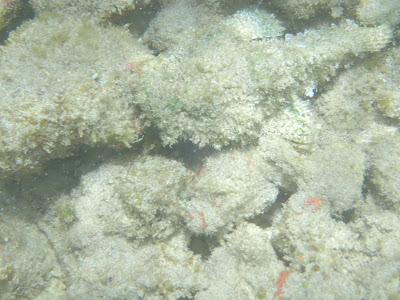 See it? (Near the top of the photo...look for side fins.) 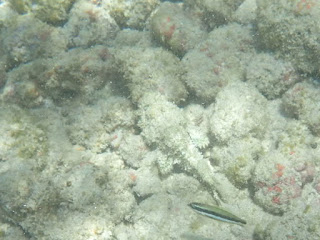 I took these pix, and actually just now saw the one immediately to the left and thought: why did I take a photo of a juvenile Saddle Wrasse?! Of course, the answer is I took the photo because the Scorpion Fish is just above the little fish, with its tail just above the little fish, and its head leaning on a rock. The side fins have a little serration on them. I thought it was cute that I saw this immediately after I warned the guy. Hope he gets along ok... 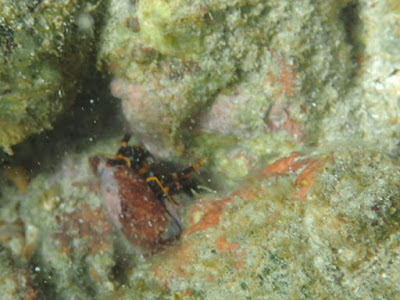 This Electric Blue Crab was hanging out in a used shell. 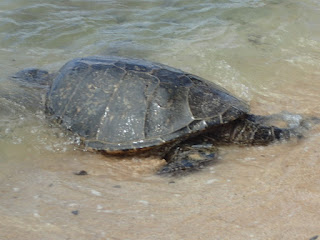 
Below is a big one that swam by me: it had been tagged by NOAA recently, I think. I hope that doesn't hurt! 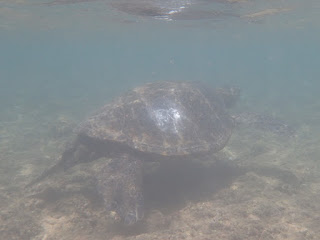 I was about to warn a couple standing near that there was a turtle, but then it swam away. I think a bit confused about which way to go to escape people. Not easy on a Sunday in Poipu! There was a roped off seal on the beach too, but he was faced toward the ocean, so his pix weren't very interesting.. 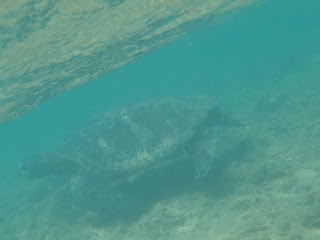 This little Snowflake Moray was trying to escape too. Its head is in the middle of the shot. 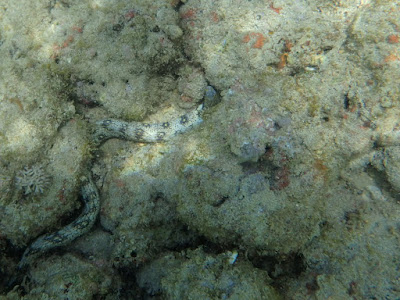 This Urchin had placed only soft stuff on its back...I don't know how protective that would be. 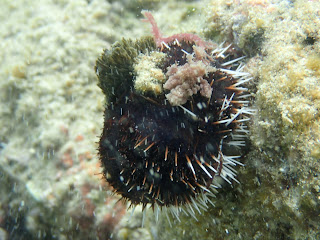 And this one was really small...maybe 2 inches from stem to stern? That's my pointer finger in my glove, as an attempt to demonstrate the tiny size. 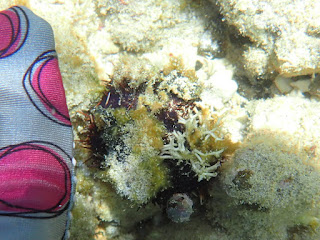 So to sum up, I will try to be nicer when people ask questions. That said, I do remember the time someone asked: "Did you see any fish out there?" There's just no good response to that!