As it should be!

Today, even with the crowds, saw a lone turtle and seal, sleeping peacefully on the beach.  As it should be! 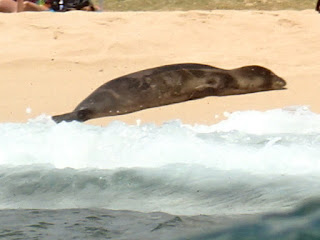 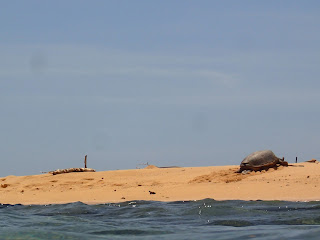 The turtle was sleeping on the little island that has been created by the water washing away the connecting spit.  And you can't tell from the photo, but the seal had a horde of watchers, only a few feet away, but it was roped off, so people didn't get into the protective circle..
I took the photo from the water, pretty far away...the photo is cropped to protect the seal's identity. ha.
I also saw what I at first thought was an octopus, but turned out to be, I think, some black sponges: 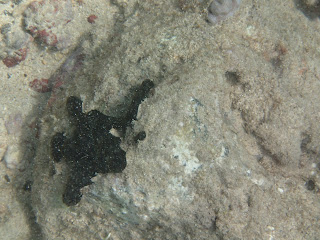 You can see how I might have made that mistake, especially from about 10 feet above... but I was happy to see, a few minutes later, the real octopus deal: 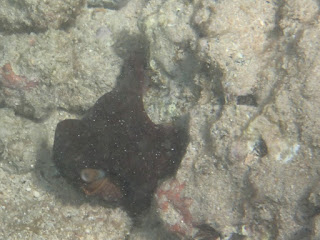 See how I could make that mistake?! Of course, the octopus has a siphon (near the bottom of the brown), so I knew it wasn't a sponge....Also, it didn't stay still, but moved underneath the rock.  I found this octopus by following a Rock Mover Wrasse..the poor octopus was pestered by the wrasse, as it slid all around the octopus.  Not sure what it got out of that equation, but there you go. So many things about an octopus are mysterious.
There was a very nice Trunk Fish, also: 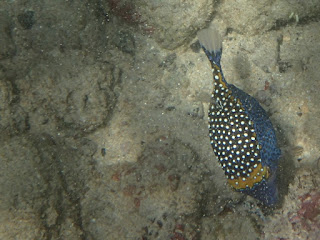 This one showed its face more than some.  Also, it's maleness. Reportedly, the blue means male. I do think they are quite a pretty fish. Fast, though.  This one was interested in eating, which is the only reason I was able to catch this photo.
I saw a bunch of lizard fish, too. Small, large and medium: 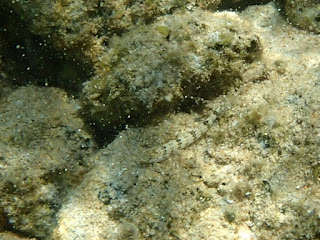 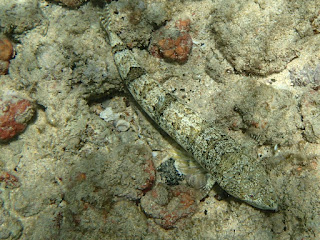 The large one flew off when my shadow hit it. Gee, sensitive.  Who knew?! 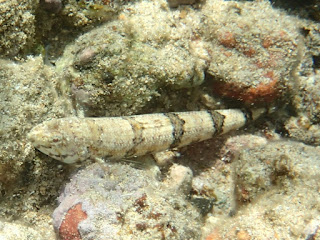 A small snowflake moray eel was accompanied by a wrasse.  Not sure the eel appreciated it. 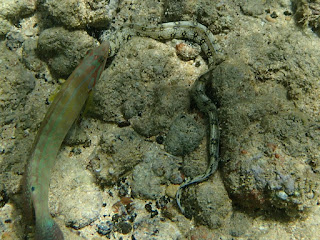 It almost appears as if the eel were about the eat the wrasse, but not so.  It was too busy trying to hide.
And I found a Turban shell, atop a rock.  Pretty rare to see them out.  This is the shell that when preyed upon and eaten, leaves behind the operculum that I collect. 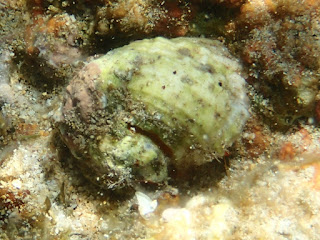 They can actually be pretty shells, but this one is covered in ocean gunk, so not as pretty.  But the shell is still pretty protective.  Although not enough, sometimes.
And its neighbor, the Cowry shell: 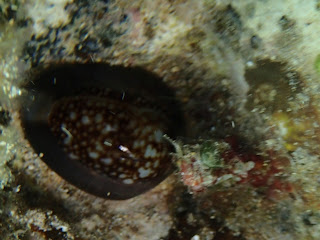 Very shiny and protected, not just with its shell, but also its hiding place, under a ledge of rock: 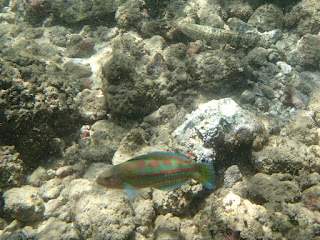 When I took the photo of the Wrasse, didn't even see the Lizard fish above it.  Two eyes can only see so much at once, apparently.
There was also a trio of Moorish Idol fish: 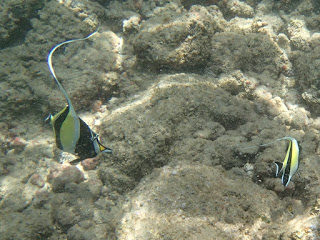 I caught only two with my camera.  I do love their personalities (quiet and just slowly cruising through the water) and the long dorsal fin.  Quite pretty. They look as if they have eyebrows, too, but you can't really catch that in this photo.
No Scorpion Fish, but there was a black leaf fish: 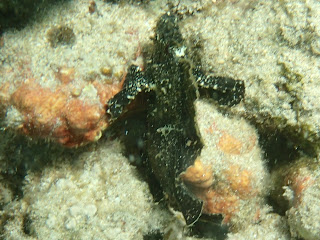 Like the Hawk Fish, the Leaf rests either side's fins on the rocks around it.  The head is at the top of the photo.
I turned over this shell, only to find a tiny urchin hoping to remain unnoticed underneath: 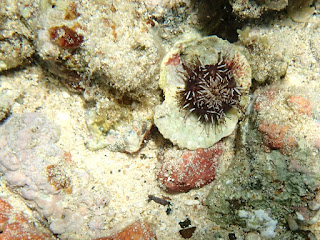 So I turned the shell back over to let the urchin keep its hidey-hole.
And last but not least, one of my fave fish, the Rock Mover Wrasse.  These are incredibly strong-jawed fish.  I have seen them throw rocks around that are bigger than they are! 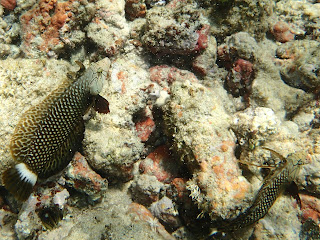 This duo cruised around quickly, bending this way and that. You can see the "antlers" on the one on the right.  I really enjoy how energetic these fish are.
And I enjoyed the safety too!  The waves were moving me all around, but I was still able to get some snaps of the local wildlife.
Keep reading..There will be a slight hiatus, as we have meeting coming up next weekend.  Back atcha asap!