It was a great title while I was driving home, but...

By the time I drove home, grabbed my sweetheart, went to Costco and Safeway, the title had totally disappeared from my head.  You might be thinking, Well, write it down! Well, did you miss the part about driving?! Anyway, there were 2 seals and finally an octopus! And no, there will be no octo-pictures, because it darted back deep into its den, leaving me with bupkis.  But at least I saw its leg for about 2 seconds....I was starting to get a complex. And not in a good way...
But I do understand.  In the afternoon, everyone and their mother is in the water. No wonder the octopuses want to hide. Even a seal was there! 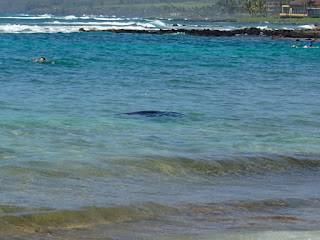 Yes, that's it, lurking just offshore.  I must have stood there for 10 minutes, waiting to see where it wanted to go.  Of course, the waves had calmed down enough for me to venture into the Big Pond where it was.  But I didn't want to get in if I was going to be meeting this seal...again. I'm told it is the same one that I saw yesterday.  The volunteer lady said it was the same one and added that what appeared to be something around its neck was no longer a something.  She knew the seal and apparently they had helped it lose whatever it was around its neck.  That was a relief. (See yesterday's post for the photo.  I took one, then swam the other way.)
So started off with 2 seals, actually.  One in the water and one snoozing on the beach: 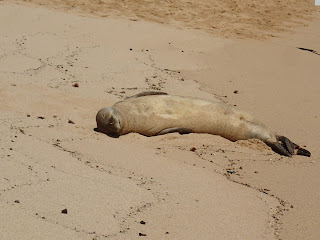 This one was rather small, so I am assuming it was young. And very peaceful.  That's one nice thing about arriving in the afternoon: they are usually already roped off and protected.
So other stars of the afternoon were Abudefduf: 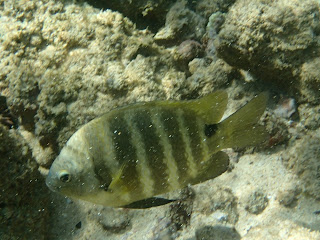 They are all over the reef/rocky area, but fast, so I don't always have the talent to get a good photo..The white spots are sand that was kicked up.
Nice pencil urchins, too: 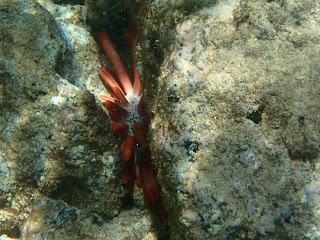 Gives new meaning to being between a rock and a hard place.  ha. 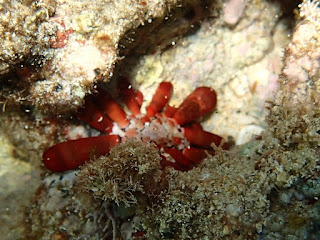 This one was cute, and small.  The biggest "pencil" piece was probably 2 inches long. Maybe.
Mr. Pinktail Durgon swam by me, too. 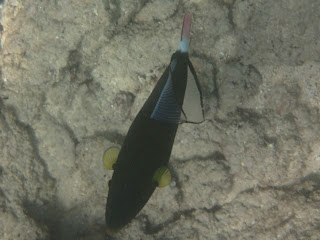 And my bad: No, I really do not know if it's a male.  Just another one of those many things I need to look up!  I haven't ever seen one look different, though.  I mean, in some fishes, the male looks different than the female.  Will you think I'm lazy if I tell you the book that might explain this is about a foot to my left?  But I'd have to get up, and walk around the fan, and find it.  Gee, the days are packed...
And just like in Biblical days, they traveled two by two: 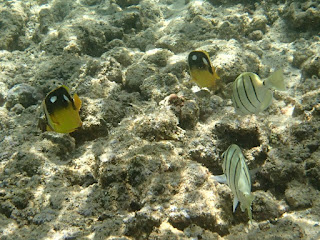 Two two-spot butterfly and 2 convict tangs.  Nice.
I saw a Leaf Fish, but the photo wasn't great.  Check yesterday's post, I think the photo was better. I mention this because I saw another Scorpion Fish today in the Big Pond.  Doesn't prove it's a different one than yesterday's in the Kiddie Pond, but it seemed bigger.  Tell me what you think: 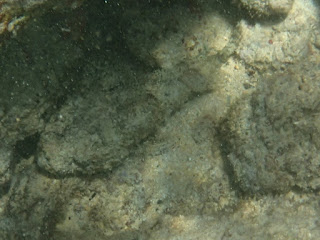 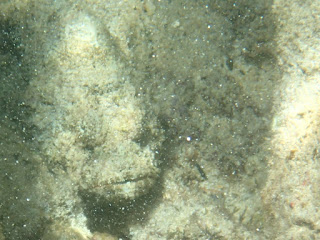 They do look mean, don't they?  Maybe because they are.  Glad none has ever tried to take a bit outa me. This one didn't move at all, so cannot see the bright colors on its fins.
Trunk Fish for Alex: 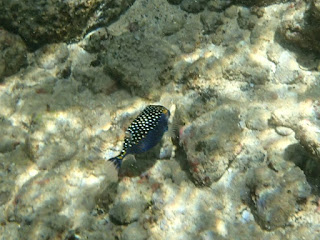 This is a male.  The females are just black and white. 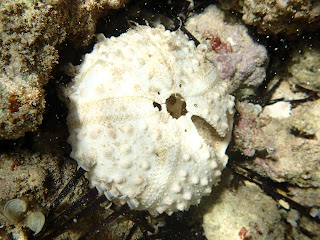 Yes, someone had lunch.  I liked this photo because it shows some of the pokey spines, as well as the connectors.  The husk is really fragile, so I've never managed to collect any. 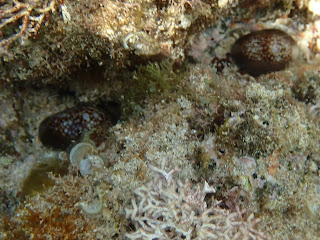 With these two, I knew they were both there.  Usually, when hiding in a hole, one is on the "roof" so I don't see it until I catch the photo at home.
And speaking of shells: 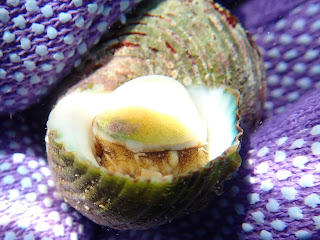 Isn't it cool?  The Turban shell itself, resting against my glove.  Then the operculum.  THEN the animal itself! Woohoo! The animal in this case is apparently a tan color.  It was probably really wondering if it was going home with me to be dried out.  But I wouldn't do that, so this one went back to the bottom where I found it.  The operculum can snap down, to protect the animal from predation. What a great idea God had when He created this shell. And just saying: do you realize there were no fishes or shells in the ark? Why would they need to be?  They were ok with water. 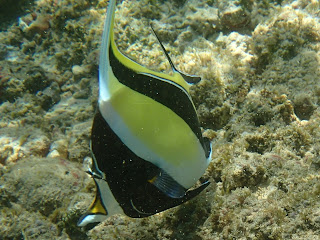 Every now and then, the light and the animal collide...in a good way 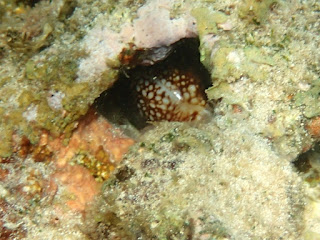 As my husband would say: Eelage! 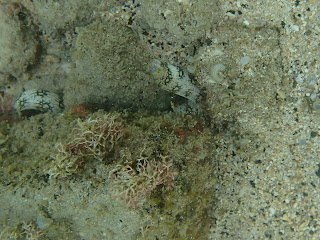 This little guy definitely wanted me to disappear.  So I did.
Which led me to the Peacock Flounder: 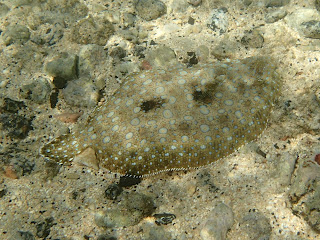 There is also a video on youtube. look for octopigirl7.
And yes, this blog supposedly lets me upload videos, but truly, not so efficient.  Last time I tried, it said: Oh no you won't either! So I used youtube.com
And palm trees for my sweetheart.  With the moon. Nice catch, eh? 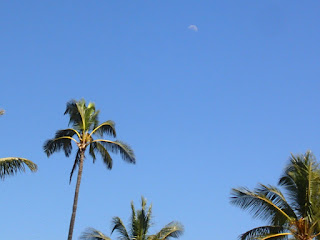 Thank you for reading.  I'm not trying to become VIRAL but it would be nice to have more than 23 readers. HA.  But thanks, to those of you who do read. Faithfully.