What a happy looking fish! 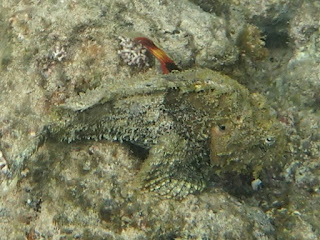 Little did he know, that when I showed my sweetheart this Devil Scorpion Fish, he would utter the title of today's post! And isn't he right?!  I caught the fish just after it stopped moving.  But the orange inside of its fin was still visible.  Just below the orange fin is its other fin, resting on the rock.  You can see only one eye, on the right.  And really, doesn't he look happy?! HA.
I should start at the beginning of the day, because it was the first day for 2 weeks that I was able to snorkel.  Yeah, I had work last weekend, so I was doubly glad to see this when I arrived at the beach: 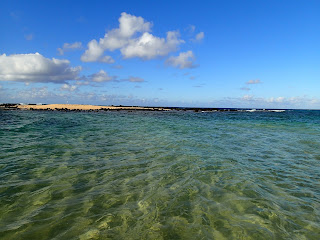 I almost called my post: nobody in the pond.
Of course, that's my preferred way to snorkel.  Nobody to look out for, except me! Of course, I still pray before getting in, and God does take care of me.  I tell people I pray for safety, but also that God doesn't tell me to be stupid!  So I always look carefully before getting in.
And right away, I saw one of my fave fishes: the Abudefduf! 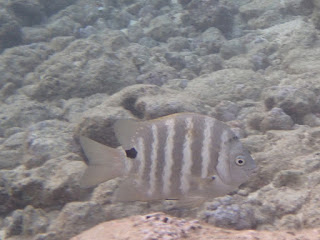 Such a darling face.  And they're not afraid, either, so that makes it a bit easier to get close enough for a photo.
Something unusual too: 3 Barred Filefish in the same shot... 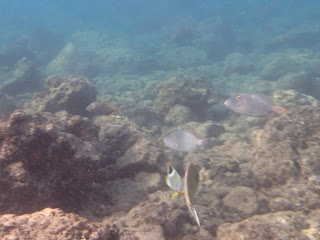 The 2 bigger ones were chasing the smaller one, just above the rocks on the left. Not sure why, but it was an interesting chase scene... 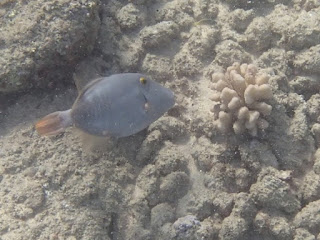 It hadn't struck me before today, but this fish looks similar to the Pinktail Durgon...especially around the tail.  The Barred File Fish doesn't have the pink tail, but does have the same type of tail and dorsal fin. Cousins, maybe? 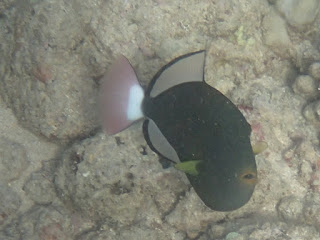 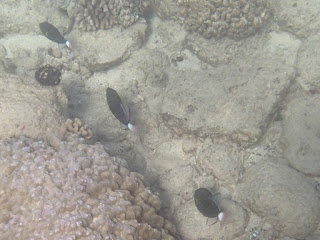 Fish were coming in 3s...
And 2 types of urchins: the spiky kind and the pencil: 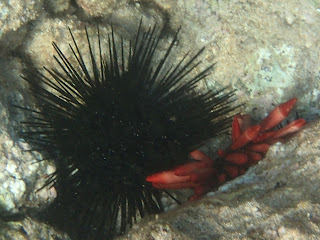 I don't know that I've seen these two so close together before.  Again, probably cousins. I do like the red and black together.   And then the octopus! 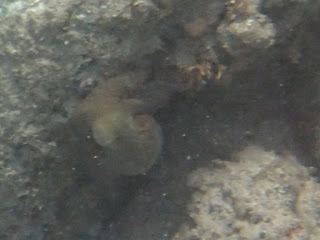 That's it, the bulbous thing adhered to the rock. This one was quite quick, and darted below the rock a few times.  I have come around to the idea that I'm glad they do this..otherwise, they'd be dinner.  I would never eat one, but others are not so nice.  Especially in Hawaii.
Now, normally, I take the Threadfin Butterfly fish for granted.  But today, I was able to grab a bit of face time...ha.  sorry. 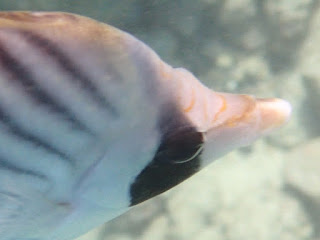 I love how the design protects their eyes (by coloring the face the same color as the eye) and the pretty yellow lines on their "noses" are cool too.  They are quite friendly and come right up to me.  Of course, I think some fools have been feeding them, but it wasn't while I was there...had I seen it, I would have told them that God gives them enough food!
Indo Pacific Damsel: 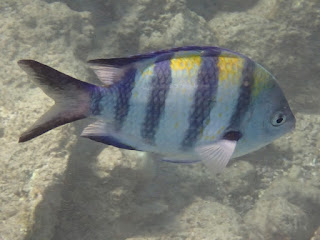 Nice color pattern.  They usually are in a group, so you get many chances to catch a photo..
Like this one: 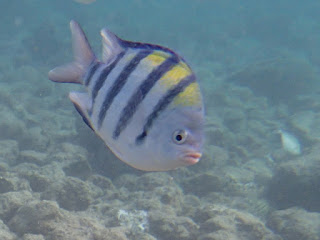 I call this one: What chu lookin' at chere?
And once again, the Rock Mover wrasse was the octo-announcer: just after I saw a Rock Mover, I saw an octopus.  Coincidence?! 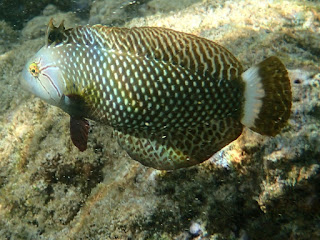 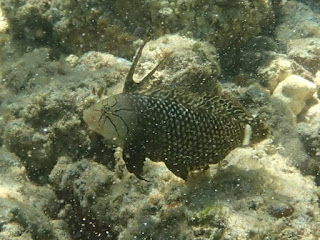 The white dots in the water are sand particles that were blown up from the bottom by the waves. Oh yeah, did I mention that the waves moved me around a bit?!
And, there were plenty of shells today: 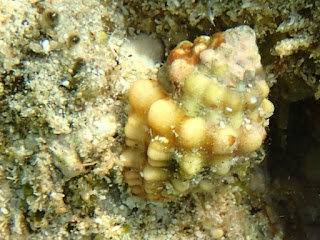 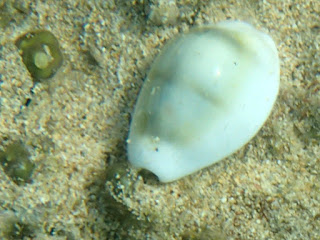 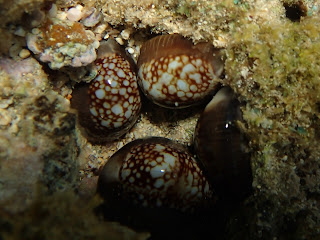 Every once in a while, God blesses me with light and shadow...and 4 cowries! I was really surprised to see 4 of the Snakeshead Cowries mashed into this hole.  I guess they are believers in protective banding together.  They sure are pretty.  The Cowry above the 4 cowries is a Money Cowry.  In olden times, I guess they used them as currency.   They are so shiny and pretty. 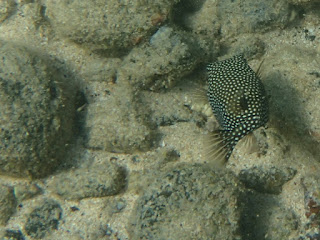 A nice Trunk Fish butt for my sweetheart...awww.. So romantic! 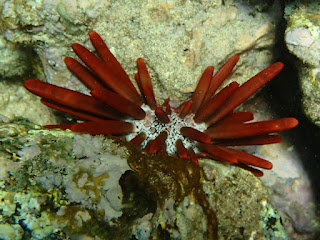 Gosh, I do love these Pencil Urchins!  So colorful and the body is often white or dark.  Not sure what the diff is but it sure is pretty.  The "pencils" turn beige when they fall off the main urchin. Too bad..
I saw some Hawaiian Cleaner Wrasses:
This is called Looking for Work: 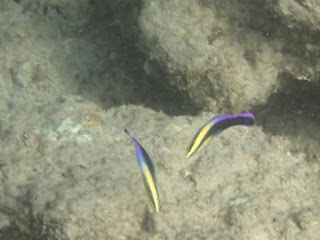 Very pretty.  And really, one of the hardest working fish in the sea... 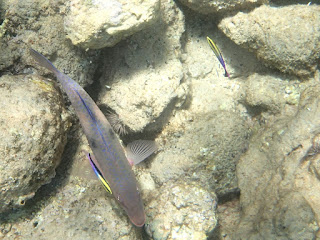 Apparently, this Goat Fish didn't care for the parasite-picking Cleaner Wrasses...it sped away. Nice colors, though. 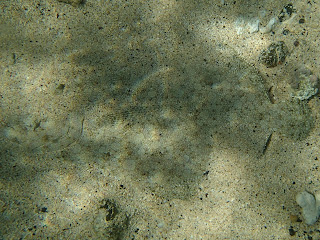 See it?  It's a Peacock Flounder, and even I almost missed it. The tail, to the right.  Eyes and mouth to the left.  It would have been very easy for someone to walk on it.  But while I was in the area, I was its girl guard...And of course, it watched my every move, the eyes rolling around, the body unmoving.
Lizard fish:Not sure what is in its mouth.. 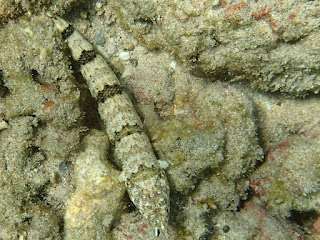 I only spotted it because it darted away when it saw me. 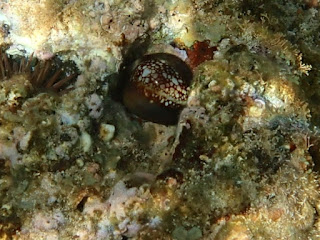 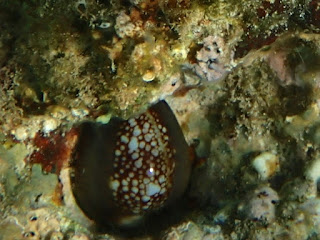 So pretty!
And not the only eel of the day, but surely the most bendy: 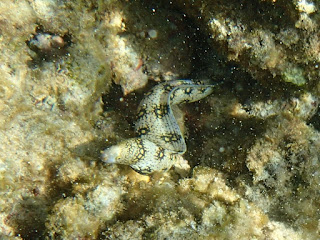 This small eel was just trying to find some food.
Octopus #2: look closely: 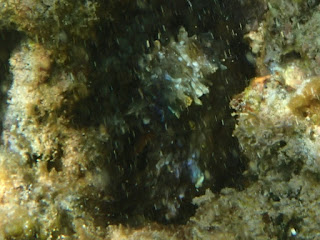 If you look really carefully, you can see its eye.  This was a young one, as evidenced by its small siphon.
And I took this for Alex, because I haven't been getting to the beach early enough for sunrise and palms.  This is clouds and palms. 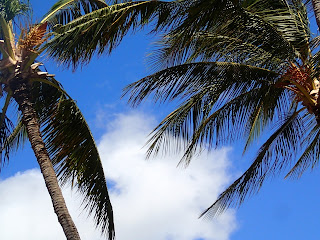 It's really the best of both worlds...palms for him, clouds for me!
Very happy for a wonderful snorkel.  Glad to be back in the water.  And thankful to God, who created it all.  Phooey on evolution!
Posted by octopigirl7 at 6:57 PM