The shell that almost came home with me! 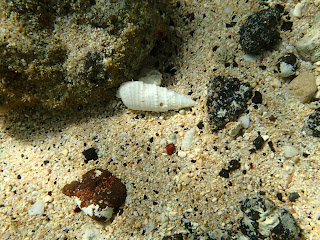 Cool huh?  And see the little hole?  Somebody ate the animal (not me!!) So I picked it up and it was light...so I was hoping it was empty.  But when I shook the sand inside out, I saw little legs.  Darn.  Somebody was making a home inside.... 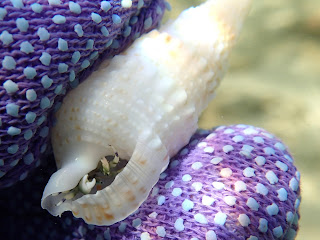 If you click on the photo, you can see the legs and the big claw...So I had to put it back down.  Drat!!! It's hell having a conscience!!!

But I did see 2 octopuses.  Way cool. 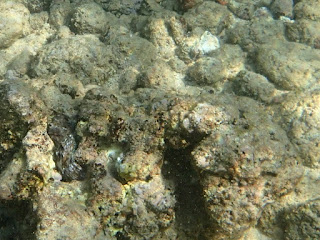 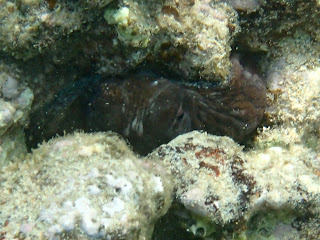 This is a cropped photo of its face....Definitely interested in disappearing. The 2nd octopus was really hiding and it wasn't possible for me to get a good shot.
But I was able to quickly grab one of the scribbled file fish: 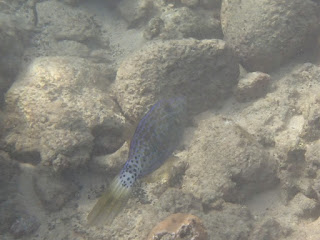 Gosh, I do love this fish!  They are really quite big, and have those lovely blue lines and spots on the body.  Sadly (or perhaps gladly, because if they were less shy, they'd probably be caught more often!), this one swam quickly away.
There were a few pinktail durgon: 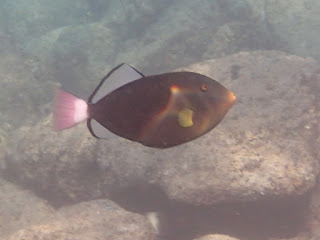 Is it just me or are they really pretty?  Also shy.
And I found two hawks...hawk fish, that is! (If I saw 2 hawks over here on Kauai, I would have to sit down out of surprise....not so much the raptors on island...) 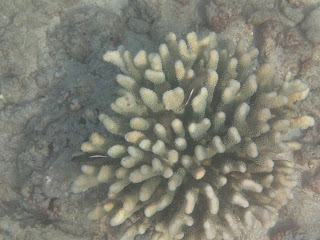 They sit on top or coral or rocks and watch the sea go by.... 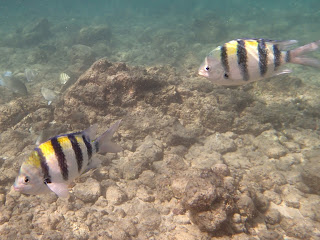 I didn't see these on Oahu.  It's funny how the fish are so different...on Oahu (Hanauma Bay), I would often see Picasso Trigger.  Here, not so much: but we do see this one: 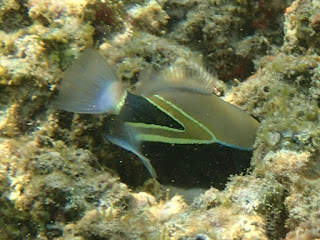 This small one was going into a hole to hide. They have a spike on their heads, so once in a hole, they can put the spike up and it makes it almost impossible to pull them out!  Not that I've tried that.....

I also saw some minnows....well, that would be what Dad would have called them in Michigan lakes. I could not tell what kind of fish they were, as they were so small and out near the bubbly, wavy water: 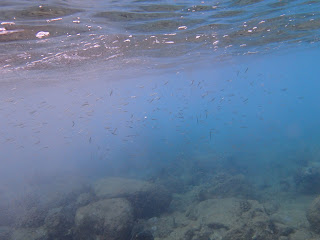 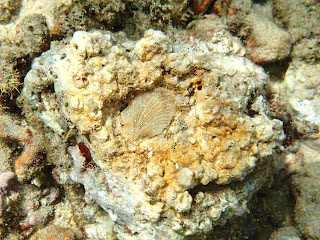 And somebody ate lobster recently for dinner....leaving only the shell: 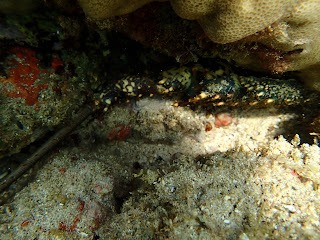 The shell was left underneath a rock, where it probably blew with the waves....
And I almost forgot the small Scorpion Fish that didn't move the entire time I was photographing it.They are ambush predators! 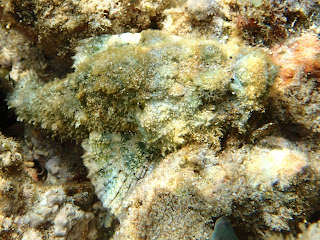 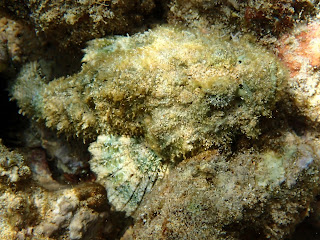 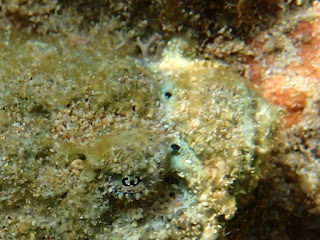 eyes and mouth...and between the two, nostrils! (Those holes...) 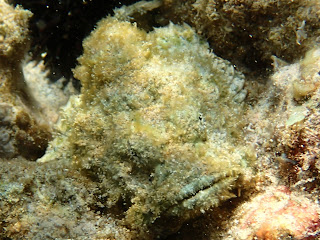 Doesn't it look like a mean old man?!
And a cone shell...as near as I can tell, a Fig Cone!
Yes, don't freak out, but I actually looked it up in my shell book.  Which, of course, didn't show this one.  Oy. 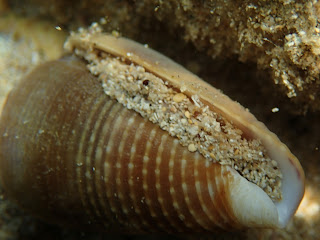 Obviously, the animal was probably still in it.  So no, I didn't bring it home.  One has to be really careful about cones....poison and all....Plus, I have that rule about not harvesting live shells.  I won't tell you about the website that featured this cone.  It's sad how many obviously "once live" shells they had.  Bad, bad merchant!
And a snoozing seal: 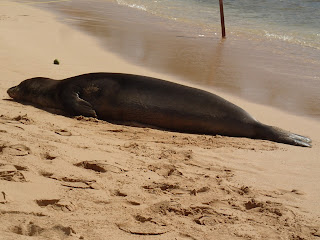 Awwww....so cute and so tired.
And roped off, so it was protected...

And near the Scorpion Fish, which was at most maybe 4 inches long, were pencil urchins.  Are they plural if more than one pencil?  Oh, I could retire and be totally happy with all the things to look up: 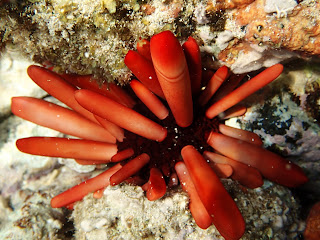 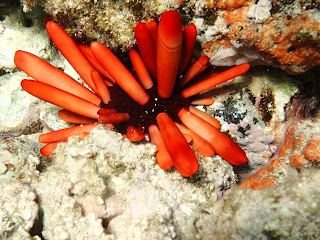 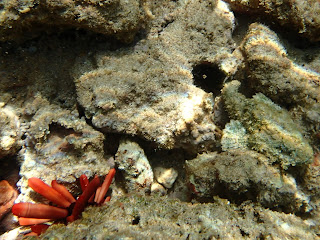 More pencils and who knew? The scorpion fish was just in the same frame, to the right.  Look for the green side fins....Amazing camou...
And last but not least, the Baby Ball I got for a friend, who just had a baby boy: 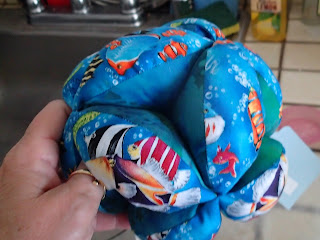 Isn't it cute?  The baby will be able to chew on it when teething.  And hand made by ladies at NTBG! Talented, right?!
Have a great Saturday.  I hope to swim at another location tomorrow...so we'll see what I find...