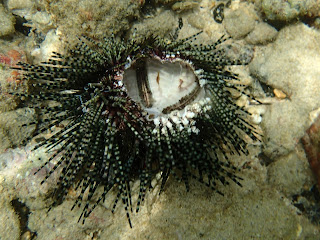 This spiky urchin had obviously recently been eaten...but isn't it amazing how the spikes live on?! These suckers could still really hurt you if you stepped on them.  Note that some are kinda thick and others are really thin....they could really slide into your foot.  Just one more reason not to walk around.  And not really a good example in either case I'll show you, but found 2 scorpion fishes today: both would NOT be good to walk on, but both were pretty well hidden.
See what you think: 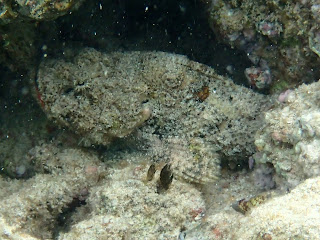 What you really cannot tell from this shot is that he was very well hidden under a rock.  Which is what made this shot so hard to take.  Had to have a weird angle on the camera and dunk under to grab the photo...and note the cone shell on the lower right.  By the time i came back to this guy a few minutes later, the cone had disappeared! Guess it doesn't like company either... 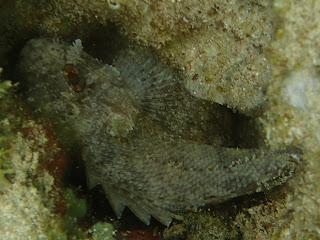 This one was really well hidden.  This one is totally in a hole.  I only noted it because i was looking for an octopus.
Today was a one octopus day...but any day with an octopus is aces in my book! See if you can spot this one: 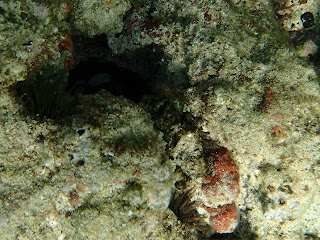 Did I mention a good hiding place?!
If you click on the photo, you probably will be able to see its whitish siphon.  But little else. Here's where it was hiding: 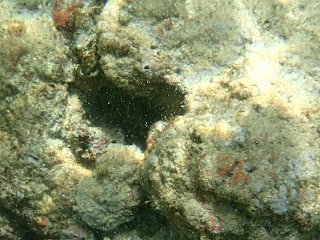 That hole in the middle of the rock.  There were TONS of people in the water.  So the octopus, being the smart animal that it is, stayed in its den.  Not venturing out so it could be spotted and harassed.  Smart, smart, smart! (Kinda wish I'd been that smart! Oh the bumpers and screamers were out in the water today....)
There were two somewhat unusual animals that I spotted: one is my pal, the Flying Gurnard and the other, a Spanish Dancer nudibranch: 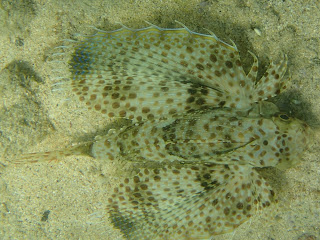 This is the coolest fish!  It gets its name from the "wings" on each side.  It can open them and make a lovely blue pattern..and also fly.  I do not usually see them with the wings expanded even this much, so I felt lucky.
And then we go to Spain: 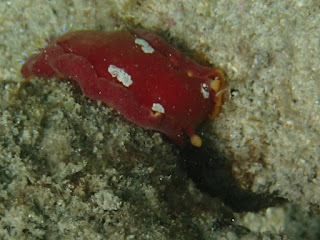 This one was down about 10 feet ...so it wasn't easy to catch a good shot.  But the head is on the right and the lungs on the left.  Click on the photo to see it better.  Last time I saw one of these, it was flipping through the water...cool.
Juvenile Rock Mover: 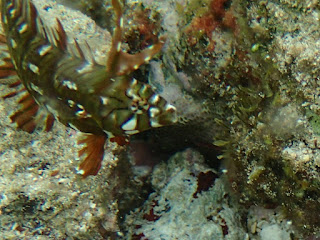 I absolutely love these fish!  and they turn into very tough fish....I saw an adult today that was picking up rocks in its mouth and throwing them around.  Pretty amazing...
And on one side of the pond... 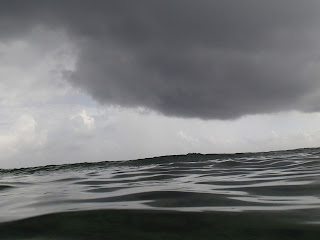 And on the other side, all white clouds and light: 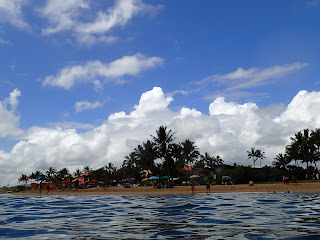 Isn't that crazy?  and I caught a drop of rain: 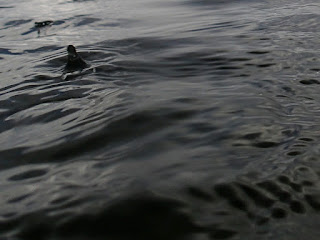 When I first saw this, I thought it was an octopus peeking up at me!  But no, it's a drop of rain hitting the ocean.  And no prob...after all, I was already wet!  And walking to the car later, it was pouring down rain. I thought: Well, I can't get much wetter than this!!!
Posted by octopigirl7 at 8:25 PM