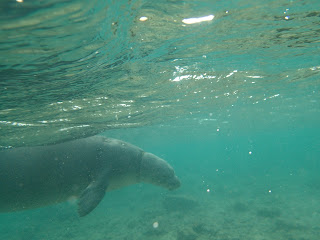 I felt something hovering over my left shoulder and when I turned, there it was! Of course, I snapped the photo and then swam in the other direction.  When I got the photo home, i noted his neck...I don't think the fishing line or whatever it was was still on him, but cannot really tell. Note the former holes in his back. Not sure what causes that... He didn't seem too upset. Later, there was another one asleep on the beach: 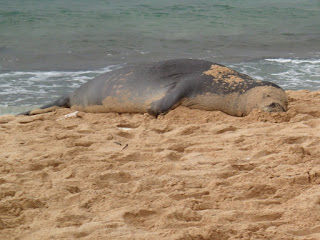 This one had some scraps with another animal too: look at the skin just below his front flipper... They do mix it up, apparently, which I why I swam the other way when I saw the first one...they are much faster than I am in the water, and can bite, I'm told...
And for my friend currently on the mainland, here's the "pond" in the parking lot across from where I usually park: 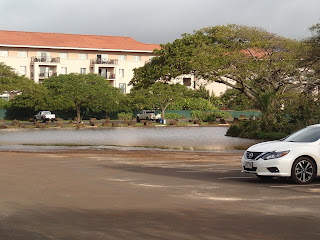 Yeah, the rains have been messing with us!  But the house is ok...alex and i checked on it after he finished work.  Yeah, on a Saturday! But they got rained out. 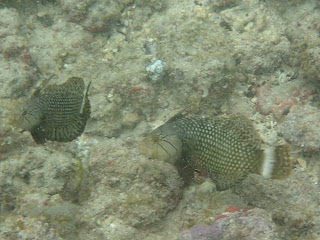 I call them Two Brothers.  There was a 3rd, but who knows where he/she went....
Saw a couple of pretty Pencil Urchins: 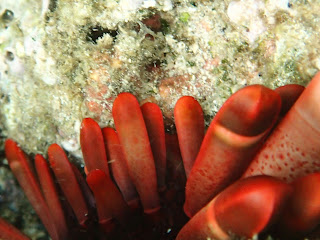 Aren't they neat?! The color does fade when they are out of water... 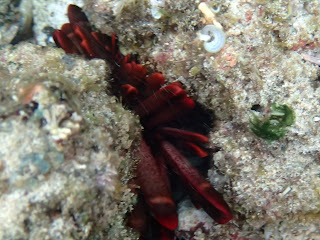 Very nice, with the red colors and lines.
I saw 2 leaf fishes and one scorpion fish!  I guess since I couldn't find octopuses, I was given sightings of even more rare fish... 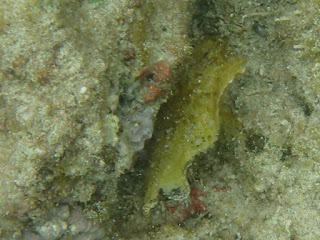 I had to look carefully at first to make sure it wasn't a real leaf, but a Leaf Fish.  Another one is coming up... 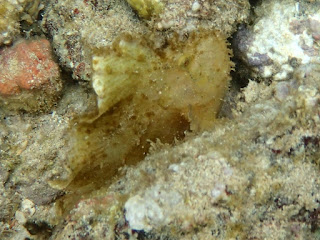 This one is a bit easier to spot.
Big back fin and legs on the rock.  It was surprising to me that both were yellow-ish today.  I've seen black, too.  Perhaps they can change color quickly like the octopus. 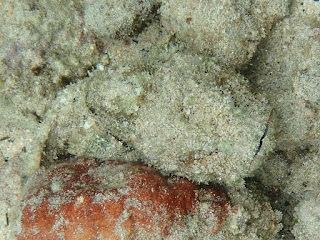 If you have any trouble spotting this Scorpion Fish, look for the slightly agape mouth, near the right of the photo.  The eyes to the left of that, then the back fin. The tail is scooched around the red rock.  Quite good camou, non?! This thing sat so still, if I hadn't seen it and moved around for a better shot, I would have lost it. They are good for ambush...they sit still and then pounce.
Snowflake moray: 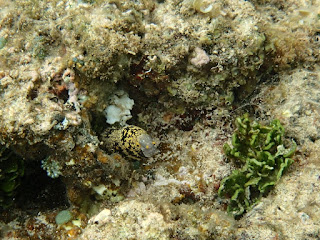 Awwww.  Another kind of eel.  You guessed it, I'm too lazy to get up to see what kind..Let me know if you find out and aren't as lazy as I.. 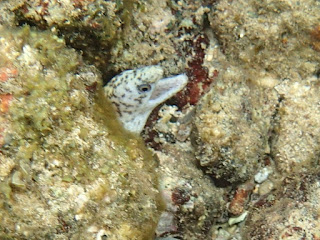 Mouth open, ready to bite.   These teeth would be small, but sharp!
Lizard fish for my sweetie: 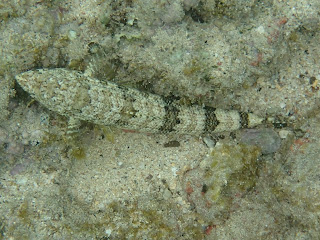 Another one that sits still unless you get too close..
Can't resist putting in the recent gecko at work: 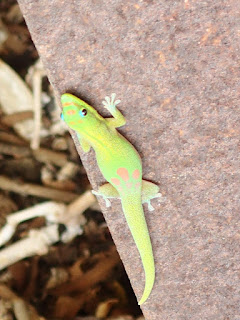 Some similarities...but i love this one's colors and feet....totally made to hold onto the rock. 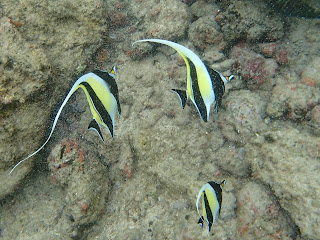 Love these Moorish Idol fish.  Very graceful and in this case, they were in a nice group...
Here's the shell, the Turban shell, where most of the operculum that I collect come from: 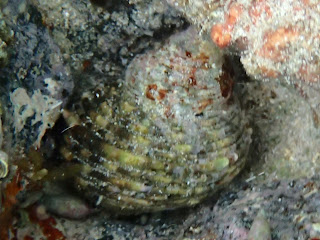 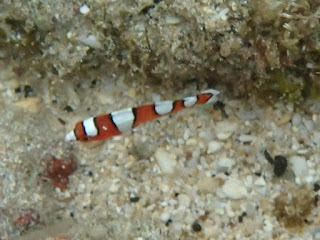 These fish aren't hiding, with those colors and stripes!
Abudefduf...say it 3 times.  It's fun: 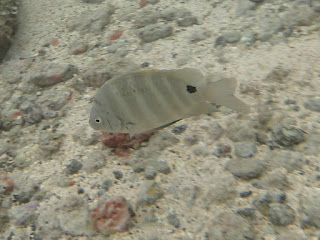 This one was darting around in the shallows, where I hang out to find operculum that have been swept in on the current..
Two Cowry shells. 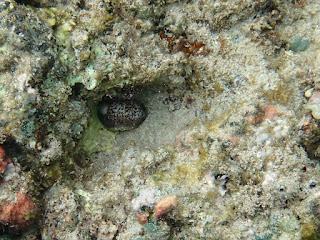 I couldn't see the 2nd one at first: it's inside the same hole, but above the obvious one shell.
Well covered in gunk, I almost missed this Hairy Triton shell: 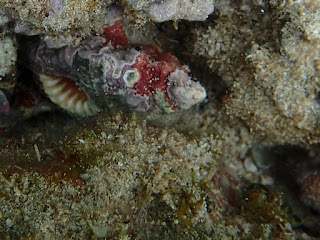 And another juvenile Rock Mover Wrasse: 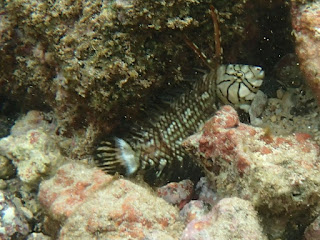 This one really moved quickly to get away from me.  Really, I am not scary...
When I got out, there was a storm moving in: 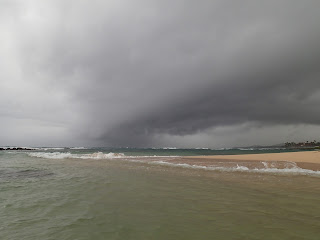 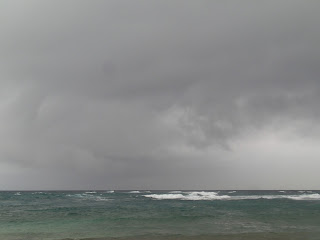 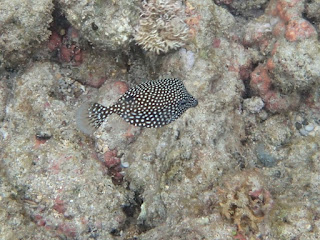 The darling, darling for my sweetheart....
Considering the dark-ish skies and waves, a great snorkel.  Only one thing could have made it better: an octo-sighting! We'll see how conditions are tomorrow.  Today it was rough in the big pond, so I stayed only in the Kiddie Pond.  Maybe all the octopus were in the big pond, sheltering in deeper water...
Posted by octopigirl7 at 4:18 PM