Do Rock Mover Wrasse have scales?

For once, yay me, I actually looked up the answer before asking it on my blog! Wow, I can learn... 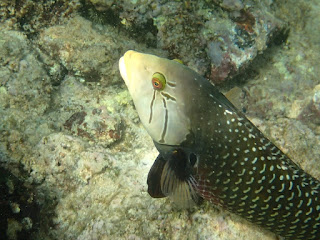 I looked at the adult Rock Mover above and thought: gee, I wonder if they have scales?  They certainly don't look as if they do.  However, having Google'd it, I discovered that indeed they have a scaleless head, except for 2 scales on the upper part of the gill openings and a row of small scales behind the eye. Who knew? (Well, Wikipedia did.) 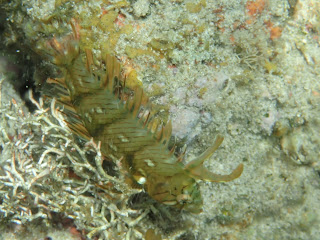 The Juvenile was hanging onto seaweed, so when the seaweed moved, so did the fish.  A really pretty good camouflage.  Not as good as the octopus, but still..what is? 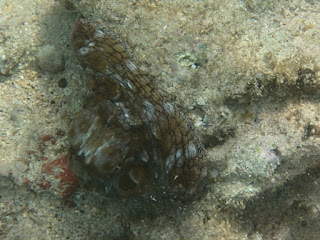 See? Pretty well hidden.  And it didn't have all the brown and white when I first spotted it. This was taken when I dove down a bit and snapped a quick shot.
And, thank you God, there were actually 2 octopuses today.  The second one was better hidden, in a hole in the kiddie pond: 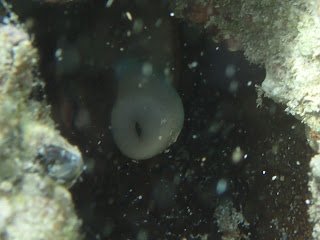 That is its siphon (breathing tube) almost closed.  I was thinking that I guess I'm glad they are so shy. If they weren't the tako hunters (bad, bad people!) would find them more easily.
And yes, of course there were other critters in today's dive: This Hawk Fish and Snowflake Moray eel hung out together.  Well, actually the eel slithered away.. 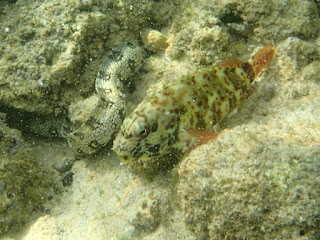 The Hawk Fish didn't move at all.  It just kept its place between two rocks, watching. That's what they do!
A Bright Eye Chromis also got its picture taken: 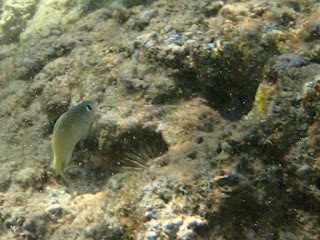 I do think they are just so cute.  And there are a lot of really little ones around right now.  No bigger than my pinkie finger nail.  And just as quick as the older ones.  Usually, by the time I get the camera turned on, they have darted away. It is hard to catch the small fish on film.
Christmas Wrasse: 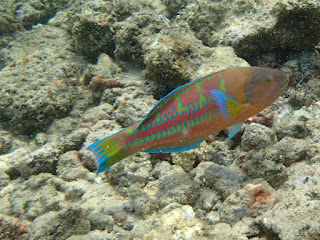 These fish are quick too, but just so pretty I have to keep trying to get another good photo.
And there was a tiny humuhumunukunukuapua'a too: 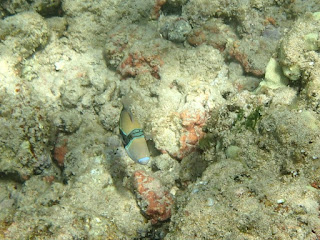 Awwww.  And yes, it wanted to get away.  Usually the small ones dart into a nearby hole to escape me.
And this seal actually got out of the water to escape me! 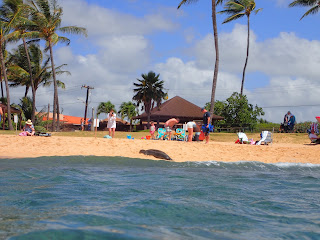 Just kidding.  This seal was already sleeping on the beach before I even knew it was there..I only looked up because the lifeguard mentioned it: they can bite! And when you watch them sleeping, you can't even tell they are breathing.  Hence the idea people have sometimes that they are dead.  They aren't, usually, but just sleeping.
This Cowry Shell also might have been sleeping, as it was deep into a hole in the coral:
I do think they are quite lovely shells.  And the shell is super hard, too.  It stays shiny because the animal comes out sometimes and moves along its outer shell. At least, that's my guess. 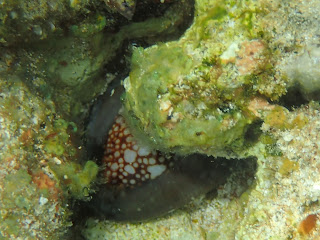 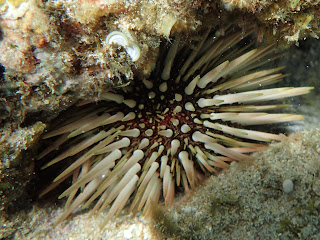 Note the new spines growing inside, just ready to poke someone...
And last, but certainly not least, especially on the cuteness scale, a really small Trunk Fish: 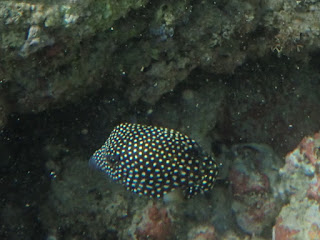 And she had her tail all curved around her back part.....probably about 2 inches long, just counting the body.  Very cute.
When my friend and I walked later near the beach, another smaller seal had joined in the nap.
Posted by octopigirl7 at 7:26 PM