Yesterday, an event called Lights on Rice took place.  I left my swimming hole with what I thought was plenty of time...NOT!

Unfortunately, there was an accident on the way home, so what is normally a 20 minute ride turned into an hour. Part of the problem was, as Alex would call it, the "lookie-loos"...people who have to rubberneck to see what happened.  As I crawled by, I must admit I did glance quickly over: one car on its side and one mashed beyond belief! But after that, the traffic did speed up, so I got home in time to grab a quick bite and then go caroling with my church.

But no time to write about my swim.  So here you go, a day late and a dollar short.

At least there was an octopus! 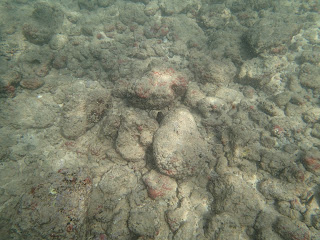 Should I call it Eagle Eye Challenge?

Because it is the weekend (!!!!!!), part of our power went out during the night.  So I'm typing this on the laptop (and yes, I am thankful we have at least SOME power!  We just bought big frozen chicken and Mahi Mahi (one of the many benefits of living on Kauai and in Hawaii.), so I'm glad we didn't have to have a bbq and invite people. Those of you who know me might be surprised that I'm not a big party person.  All that said to say this: there will be no cropping on this post or the next one... sorry.  Bu the octopus is in the center of the shot, peeking up at me.  Wishing I would go away. If they only knew how much I admire them, they wouldn't be afraid of me.  But until I figure out how to communicate, we must live with each other, just guessing what each other has on its mind.

I am always grateful and thankful and Mahalo-ish about finding an octopus.  Especially since I didn't today...

But I did find two beyond-juvenile Rock Mover Wrasses, hanging out with each other, and kinda looking like they were going to get feisty. 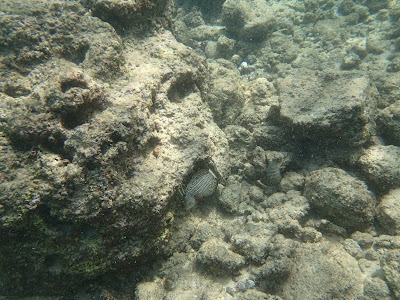 They are almost the same color as the bottom, so hope you can see both of them. They have a white band on their tails.  They are quite flexible, as they often grab a rock in their mouths and throw it around. (Hence the name..)  I haven't seen any other Wrasses do this.  They all are quick, however, so you gotta grab the shot while you can.
Male box fish: 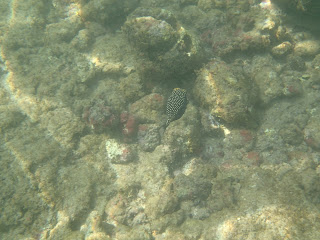 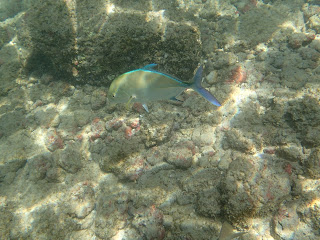 I don't see nearly as many of these fish over here, so I do enjoy them when I do...and I look, if they are circling, to see what they are hunting.  It is usually an eel.  Guess I should be happy they aren't chasing an octopus, even though that would help me find more.  I don't want the fish harassing them or eating them.


Still haven't figured out what this is: 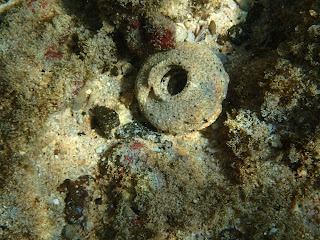 I'm still guessing some kind of waste, but am having a hard time picturing what animal could make it.
Flea bite cone: 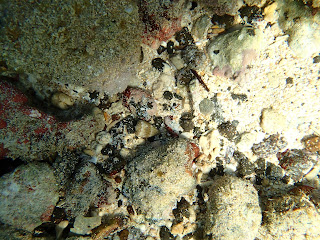 Snowflake eels trying to get away: 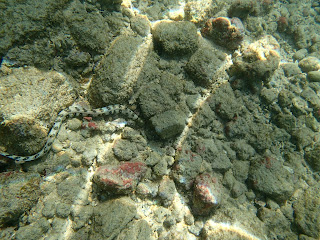 And I call this one Everyone needs a hairband...even an urchin! 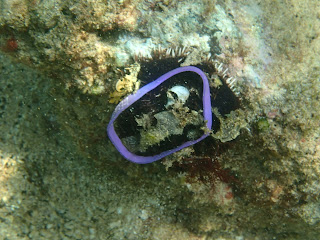 I was going to pick it up, as trash, but who am I to argue about someone else's fashion sense?!
After all, they are called Collector Urchins.
And a shrimp doing something in its tunnel...the orange color drew my attention.  I guess that's one good thing about the bottom being sand colored: some things really draw your eye. 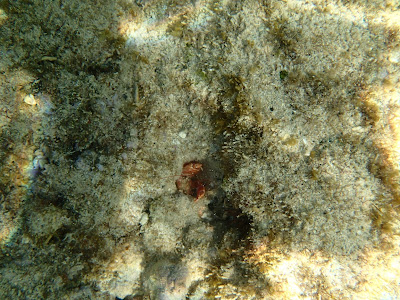 This photo definitely would have benefited from being cropped.  Look in the center for the claws...or are they arms? 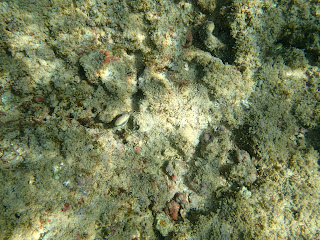 Sorry, another Eagle Eye Challenge...just to the left of center.  It's about 2 inches long, including the tail. SO CUTE!  And yet so feisty!  For a tiny fish, this guy was prepared to defend his territory...or zoom into the hole near him.

So any snorkel with an octopus is a good snorkel.  Stay tuned for today's report. And please drive safely!