Today, the winds had died down, and it was low tide, so the water was lovely.  What a treat.
And there was a snoozing seal: 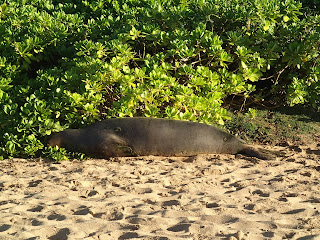 This one was unusual in that it was sleeping way up on the beach, in the plants. Always great to see them.
Two octopuses this time. 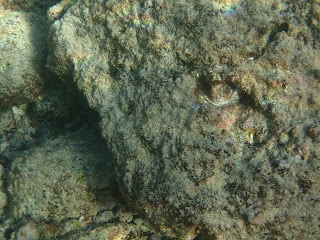 Hiding in the rock.  Isn't it amazing how they are almost the same color as the rock? 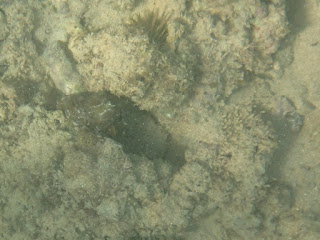 Also a little one.  It didn't change to angry maroon, but it didn't come out to play with me, either.

Since I started out in the big pond, the water was deeper.  And the urchins were out: 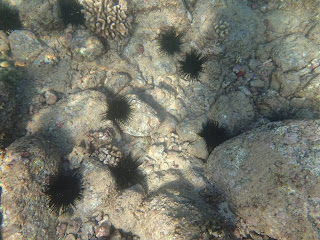 And deeper is good in this case: there's little chance that those spines will interact with my tender skin. 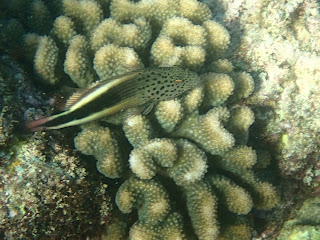 Hawk fish that had freckles.  HA.  Well, maybe that's not what they would call them...These fish sit on top of coral to view what's going on. 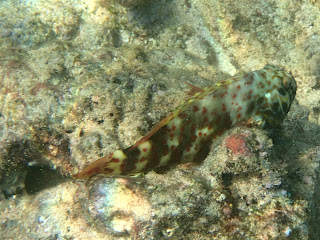 It occurred to me that this Hawk Fish has the same colored spots as the Spotfin Scorpion fish.


Different outlook on life, though.
There were plenty of eels looking aggressive 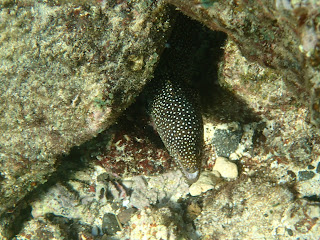 And I caught some waves...from underneath: 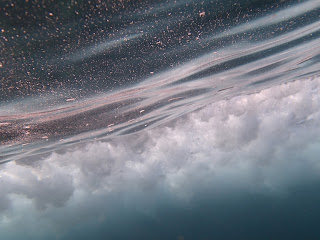 This was just before it tried to mash me...
Two Pinktail Durgon visited me, too. 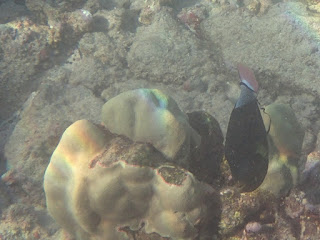 You can see a bit of its face, and of course the pink tail.  This one was half of a pair; another pair swam nearby. 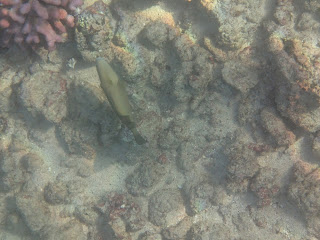 I shall have to look this fish up.  It's definitely a Trigger, but not sure which one.
And another of my fave fish: the Cigar Wrasse 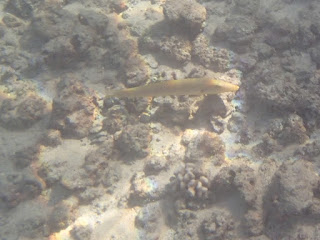 I guess it was headed to a fully yellow phase fish.  Normally they are greyish with a spot or two of orange color on their backs.  I like them because they curve around things as they swim.

There was a pair of Hawaiian Green Lion fish too.  But they were under the rock, only venturing out a couple of times. 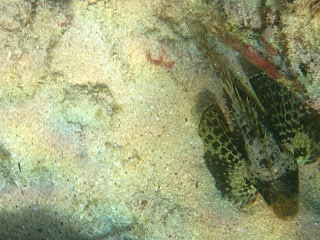 In some ways, it reminds me of the Gurnard, with those side fins that look as if the fish could fly.
The Brighteye Chromis were fast at darting under cover, but this one was caught in the company of a couple of other fish: 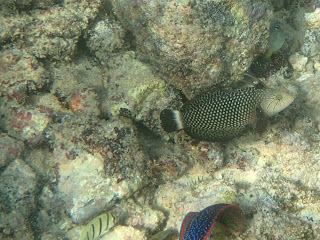 The Chromis is up at the top, near the rock.
Also accompanied by a Rock Mover Wrasse, Yellow Tail Coris and Convict Tang.
And a photo of the juvenile Rock Mover: 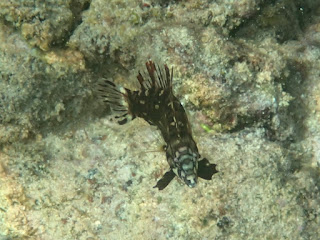 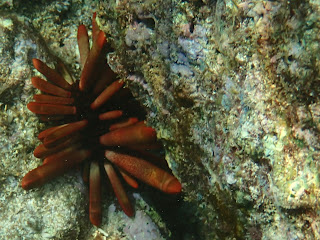 Pencil Urchin. By the way, the eaten/broken one I found not too long ago was totally disappeared by my return yesterday.  Amazing.  I do wonder what preys upon them, or if the "pencils" just washed away in the current... 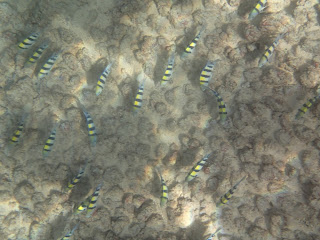 A whole bunch of Indo-Pacific Damsel fish.  They are very pretty and aren't afraid of divers, particularly, so it's possible to get photos...
And another Cowry shell hiding: 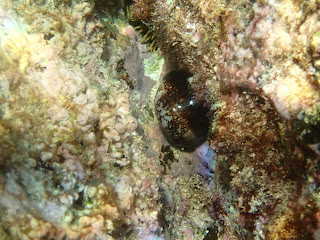 These are such pretty, shiny shells!
Hebrew Cone: 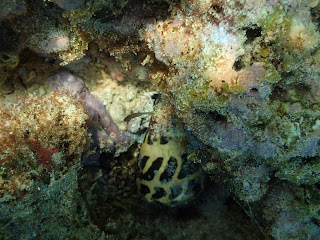 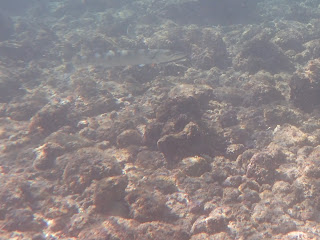 Barracuda: Don't they just look mean?  Click on the photo to see the underslung jaw...They are sneaky and quiet too....this one swept away, once it saw me notice it. 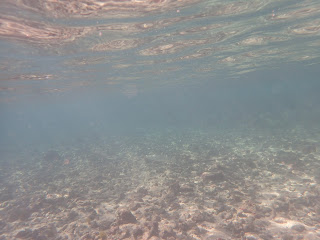 Look for the 2nd one in the center of this photo.  I told you they were stealthy!
Rock Mover teeth: 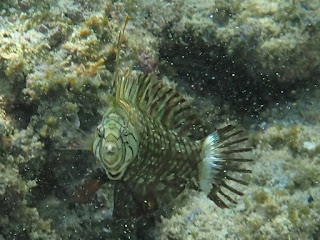 This is I think the first photo that shows even a bit of their teeth.  These are really strong fish, throwing rocks all over...Now you can see a glimpse of how they do that. 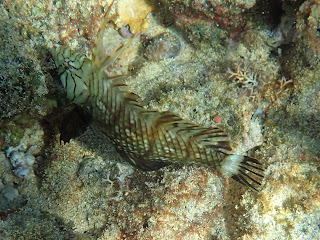 These patterns of lines and colors in this Juvenile Rock Mover are fascinating.
After almost 3 hours of swimming, because I didn't get enough exercise (HA), my pal and I walked from Lawai Beach down to Spouting Horn.  And it was: 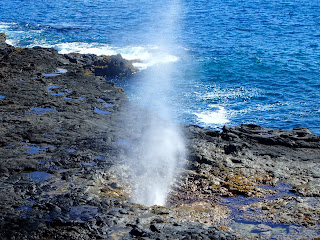 Spouting, that is!
And for those of you who haven't yet visited the fabulous Garden Island of Kauai, you might not know about the chicken theme.  They are everywhere!  Even in the trees: 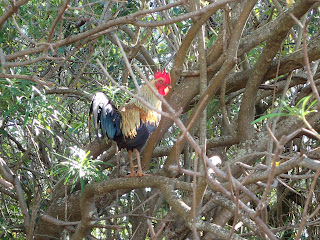 We laughed.
Posted by octopigirl7 at 6:59 AM