Hanging in, hanging on

Perhaps because I saw no octopuses on Sunday, today I was treated to two!  And two Scorpion fish...different kinds, but enjoyable. 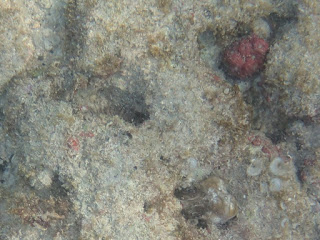 I won't criticize you if you say you cannot see this octopus.  #1! A small one, kinda shy. Look down from the red rock.  Then at the bottom of the photo, look a bit left.  There you have it.

I am of 2 minds about teaching you how to see them...promise you won't catch and eat?

Octopus #2 got a bit sandy, as the waves brought things up from the bottom: 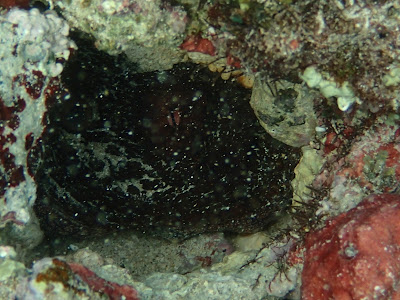 If you look just to the left of the center, you'll see two bits of red: that's the octopus eye.  And oh yeah, it was watching me.   Bigger, so probably older than the first octopus. (This is the Hanging in part of the post title.)

I wonder if people swimming around me wonder why I'm thanking God out loud?! 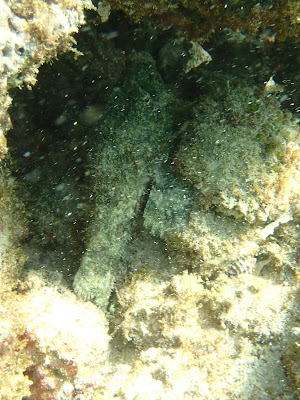 I'll grant you: not easy to see.
They are ambush predators, so they hide out, underneath coral head overhangs.  If you look in the top third of the photo, just to the left, you'll see the eye.  Its fin is resting on the rock to the right, and the tail is just inside the sunny part of rock near the bottom.

The 2nd Scorpion Fish, a Spotfin, was easier to see, because I was able to get closer: 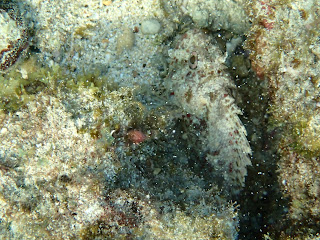 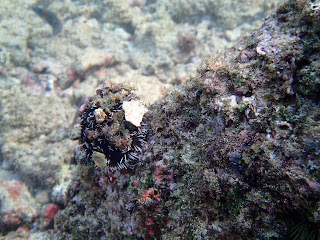 Actually, I guess it's really hanging on the side.  But if you look closely at the rock it's on, it is so amazing how much STUFF there is on this rock!  Kinda like a hoarder rock...

I noticed today that there are many fish that I kinda take for granted: One is the Saddle Wrasse: 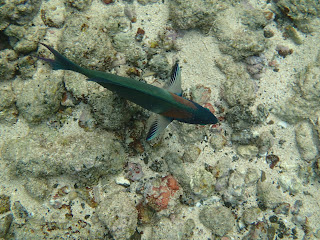 Another is the Orange Shoulder Surgeon fish: 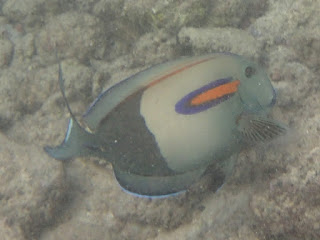 I should never take any pretty fish for granted...or any fish at all, for that matter! Just imagine how cool it would be to be free to swim around all the time.  Wonder why they don't get pruney?  Hmmmmm....
I also found a gold ring: 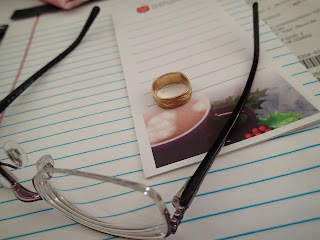 No inscription, so it's a keeper...or i will sell it...haven't started my new job yet!
And I could be wrong, but I think that this might be how a shell looks when an octopus has used its beak to drill into it: 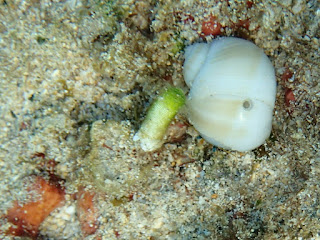 I didn't pick the shell up, but assume it was empty...but you know about assumptions.
And my fave puffer fish, the Ambon Puffer: 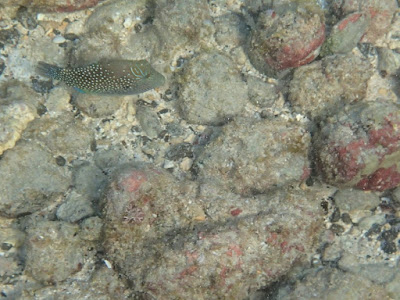 I keep trying to get a shot of the fin on its ventral side: it has a very pretty electric blue fin!
And before I get sleepy, two for my sweet man: 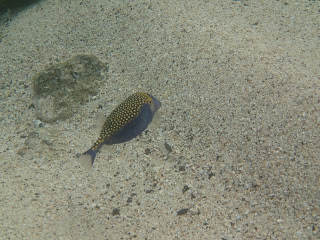 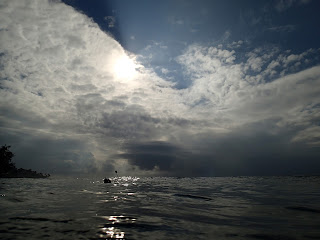 You may have to look carefully, but there ARE palm trees in this nice cloud and water photo.  Too bad that no one will pay for photos of clouds...I'm told you have to have people in the photo...they will pay.  Supposedly.  What a shame.  People are tougher to photograph.  And they don't change color, usually, nor can they make their skin become instantly bumpy as the octopus can.  Oh well.  Guess there's only one very cool animal like the octopus.  Although cuttlefish are a close second.

Have a wonderful holiday season.  Remember to thank Jesus for life, love, light, peace.. oh yeah, and His wonderful creations in the ocean!
Posted by octopigirl7 at 4:36 PM