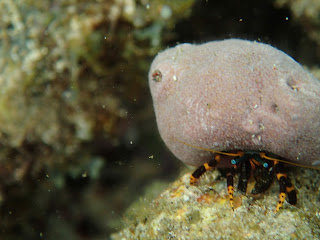 This Electric Blue Crab is carrying a heavy hair load! HA. I am a bit surprised it didn't disappear inside the shell when I swooped down to take its picture.  Gotta love their energy.

What a great day of swimming it was on December 7.  My friend and I saw whales and dolphins from the cliffs...even a couple of whale breaches! (No pix, unfortunately...it happened too quickly for me to catch. But just imagine in your mind the energy expended to get a big body up and out of the water.  It was a smallish whale, but still.)

The dolphins were more near shore: 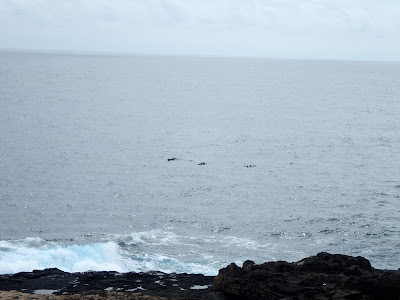 I always love to see dolphins. They were just swimming along in their pod, not jumping or anything.  Perhaps so we wouldn't be distracted and watch them instead of the whales. 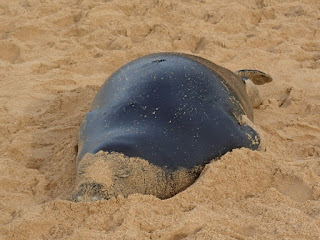 If it were me, I'd feel kinda itchy with all that sand on my face!  This seal was later joined by another: 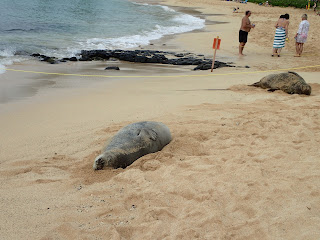 Thankfully, these seals were already roped off to protect them, so I was able to just take a few pictures and enjoy their sneezes.  It's a whole new concept when you're a seal: there's a lot more noise.  And no Kleenex!

Once in the water, I happened upon two Hawaiian Cleaner Wrasses doing their jobs: 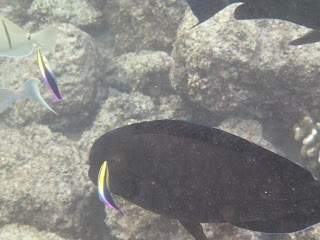 They swim around the waiting fishes and pick off parasites.  It did occur to me to wonder: who cleans the Cleaner fish? 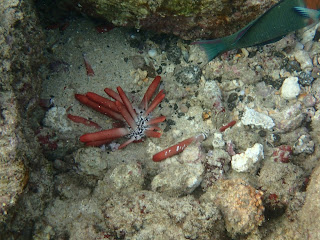 This Pencil Urchin was someone's breakfast or dinner.  The loose red spine went into my dive bag...it occurred to me that I could take the whole thing, but I wasn't sure if it would start smelling when I got it home.  I do usually put operculum or bits of shells into a bleach solution for a while, to kill off any bacteria that might be clinging.  My jar isn't big enough for the whole Pencil Urchin though.

These animals are so colorful, they really stand out on the sandy/rocky bottom.  The Saddle Wrasse on its way out of the photo had swept by me to see if any bits of food would be released when I picked things off the bottom. 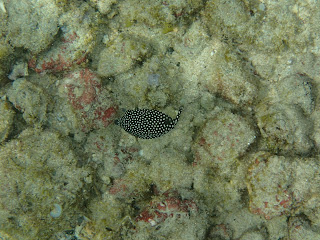 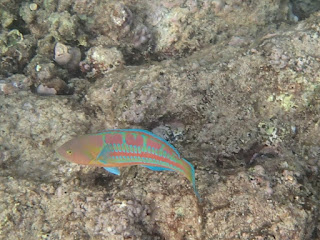 This Christmas Wrasse reminded me of two things: how drab the bottom can look, so the Wrasse really stands out and how hard it sometimes is to find octopuses, as they can really blend into the bottom. 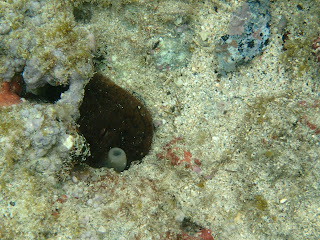 Always thrilled to find an octopus, especially my first one of the day.  This one later had relaxed to its "normal" coloration: 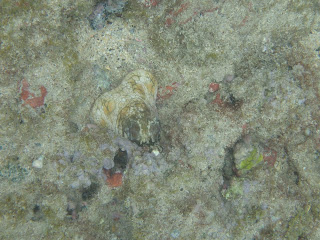 Off white, brownish yellow and the eyes: brown and at the bottom center of the shot.  Not sure why it didn't turn dark brown on the second pass by it.  Maybe it had decided that I wasn't going to harm it. 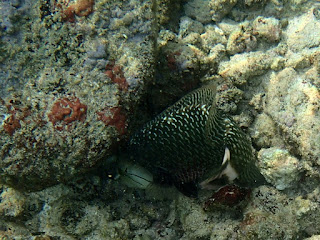 See the big rock below and to the right?  The fish had just picked that rock up in its jaws and hurled it over there!  These fish are fierce in finding food.
My old pal, the Abudefduf: 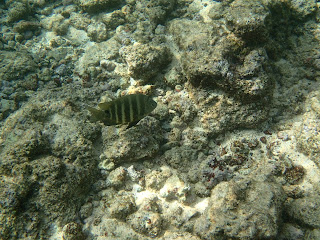 They are more shy here on Kauai, not sure why.  But I can occasionally catch 'em with my camera.
This Lizard fish was pretty well hidden: 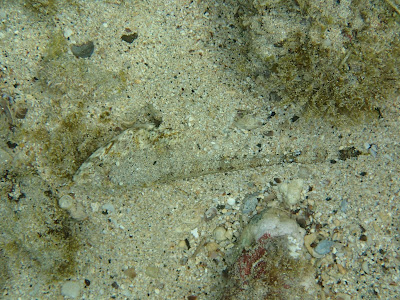 It looks kinda like a stick in the middle of the shot.  Very good camouflage.  Usually, I can spot them when they move...kinda like the octopus.
Sea Hare: 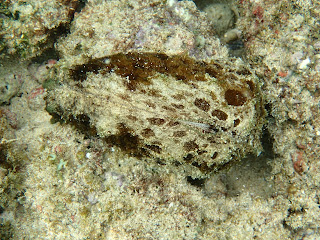 Not pretty, but fascinating.  Note the track down its back, almost like an outside spine. 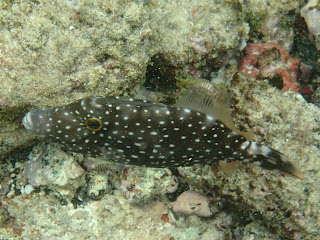 This fish is apparently the juvenile of the Barred File Fish.  It was quite shy and tried to hide under a coral overhang. 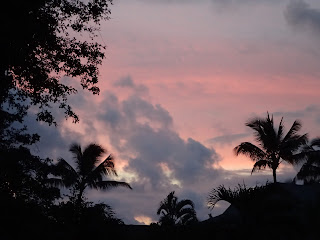 Sunrise from just outside our house. Ah, what a glorious Painter we have!

And in case you're wondering, I used two cameras today, for a total of 412 pictures. The first and fave camera got tired, so I whipped out camera #2.


And palms, too, once I got to Poipu: 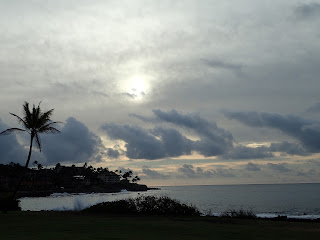 Palms, clouds, ocean..ah, what a great view!
I was quite pleased to see a Hairy Triton shell: 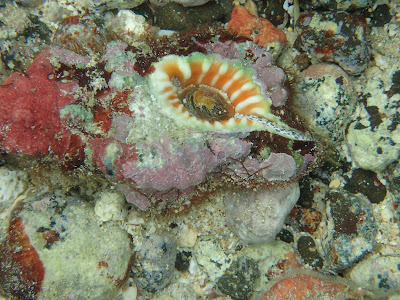 Not only is it a lovely shell, but please note the Operculum in the center: holding the occupant in and intruders out. It is also interesting to note that the operculum is not white, as I usually find, but a brownish concoction.  And if you click on the photo, to the right of the shell's center, you can see what I think is the animal oozing down the little groove to the right.  I REALLY wanted to take this one home, as I love these shells, but of course, I didn't.  After all, it was a live thing. 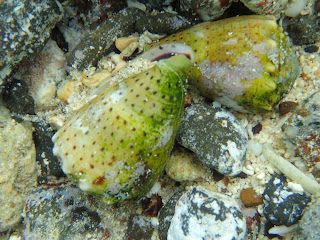 I don't know if they were planning to eat each other or had something else in mind.....
And a lovely Cowry shell, hiding underneath: 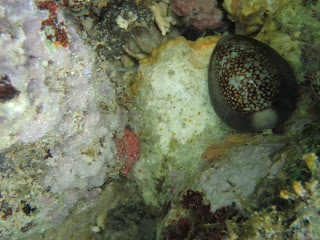 It's amazing how hard it is to get these shots!  You gotta go kinda underwater and then rear your head up to see underneath the rocky overhang.  But worth it.  I love these shells. I have seen shots where the animal is seeping out and over its shell....I guess that's what keeps them so shiny.

Pearl Harbor Day: I cannot let December 7 pass by without noting the Pearl Harbor "Day of Infamy", when the Harbor was bombed.  One of the ladies I know was there on that day, so long ago.  She said her mother hid all their Japanese kimono and katana (sword) so they wouldn't be discovered. Thankfully, she and her family were not put into a Camp.  She added that the kindness of others during that time was responsible for changing her from Buddhist to Christian. God does move in mysterious ways.
Posted by octopigirl7 at 8:05 AM