As alluded to in my previous post, I came up empty on octo-sightings today.  I didn't venture into the Big Pond, as the waves were still mashing that water around.

Not that I had no waves in the Kiddie Pond, but there, they are more manageable. 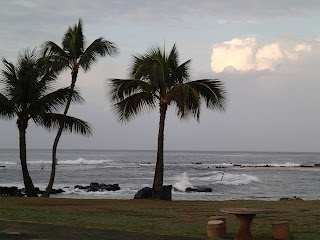 See the pole and sign just to the right of the palm tree in the middle?  That's the sign that tells you not to snorkel beyond that point; and that's where I have seen an adult octopus in the past, but lately I haven't been able to get close enough to see if it is still there.  At least not without being pounded by waves.
Before the sun came out: 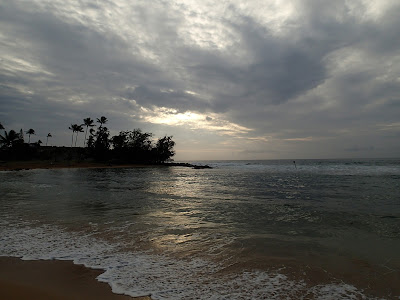 I do love the early morning colors.  More sun would have been nice, but I'm thankful I was able to swim at all.  Just a reminder: Please do not always believe the weather predictors!  We were to have rain and winds....not so much.  We did have waves, of course.  I am awaiting the "real" winter, when the water becomes like glass.

I did hear, although I didn't see, that there were whales frolicking offshore. WISH I had seen that!

The island that used to be tied to the beach was under the onslaught of waves and tide: 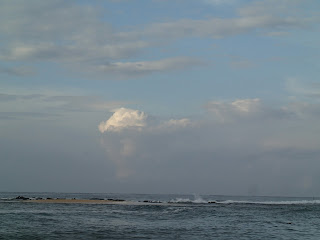 And folks were still walking out through the current to get out there.  Different goals, different folks..
Wana: 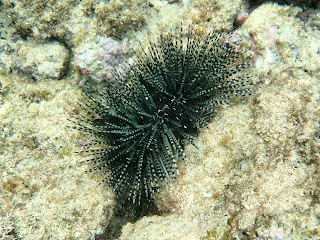 Love how it looks, but am happy to not have been hugged by this animal..
I was surprised to see Pencil Urchins in the Kiddie Pond.  I don't believe I've seen those in the shallower water before.  Perhaps they were just hiding better previously: 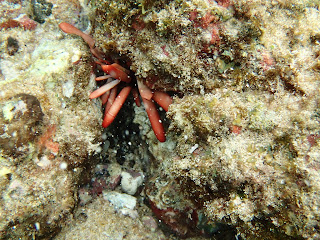 I did discover two in the Scorpion Fish family:
The Hawaiian Green Lion Fish: 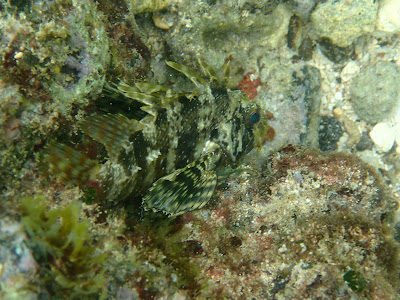 I find these fish fascinating.  Not being the most patient person, I am amazed at any animal that can sit that still for that long.  And in this case, it was pointing itself downward, while clinging to a rock. 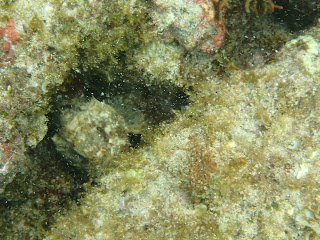 The Spotfin Scorpion Fish. Not nearly as good a photo, as it was hiding between two coral heads.  But you can see the face and fins.. 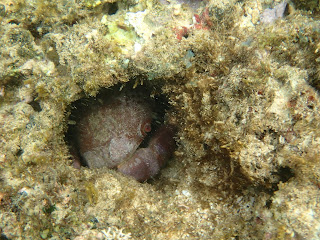 I can't remember the name of this crab, but will let you know.  It's very boxy and kept hiding in this hole.  There SHOULD have been an octopus in this hole....just sayin'!

I am always happy to get wet in the ocean....next time, I'll ask God again for an octopus.