Two drupes walk into a bar.... 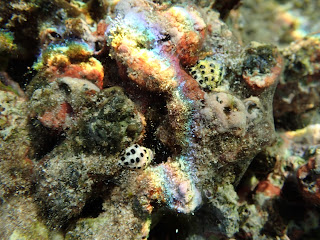 OK, there is no bar, but i love those jokes where people walk into a bar and things go all astray. Sometimes I think I'm funny....you may not agree.  But these 2 Drupe shells caught my eye.  I thought the rainbow of light was fun too...

Three octopuses today.  Wow.  I am still excited by that.  They were all young, i.e., small, so I'm wondering where the big guys are. But honestly, I like the little ones more.

There were two seals snoozing on the beach.  One was way up in the plants...my friend tells me that during moulting, they keep up and away from others. 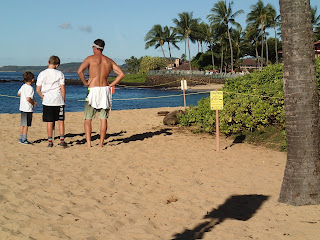 She also heard that this one, sleeping near the plants, doesn't like the other one. Guess humans aren't the only ones who can't get along. 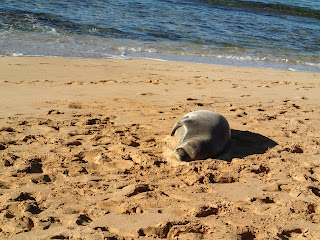 I'm glad they were not bringing out the fisticuffs.  Snoozing is always better than fighting.  I also heard that a lady took it upon herself to try to touch a seal not long ago.  Big Mistake. It reared up and almost bit her....stay away from wild animals!

A trunk fish swam past me: 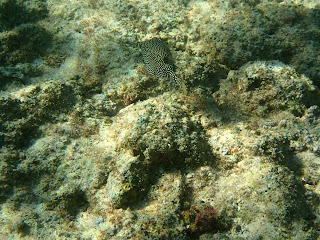 And there was a Spanish Dancer inching along on top of a rock: 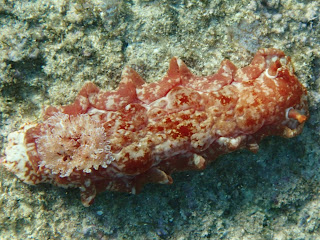 It's a nudibranch, which means naked lung.  In this shot, on the left, you can see the "lungs" which are fronds on top of the animal.  The head is on the right.  I think they're very pretty. Since there's a bright red color, that could mean they have poison, but I didn't investigate yet.  I've been busy! This is the last week before I start my new job, so I'm working to mash everything in while I have the free time.
Octopus 1: 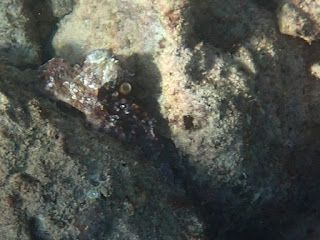 All the octopuses stayed pretty calm as I photographed them.  I think only one changed to the dark maroon color.
Octopus #2: 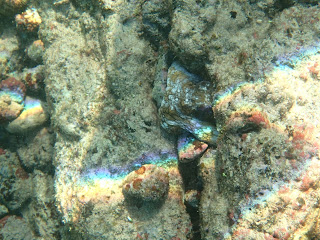 Even got a little bit of rainbow in this one.  This is the octopus that, once I backed off a little, starting moving rocks around.  And who better?  With all those legs, they can make short work of any building enterprise. 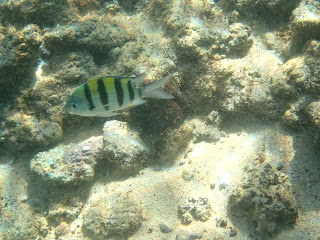 While not a great photo, I included it because you can compare the size of the fish with the octopus.. the octopus is the brown blob just behind and under the fish's tail... 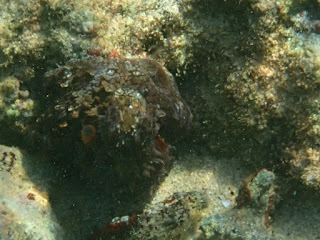 You can see more of the octopus in this photo.  The siphon is on the left.  It had made itself warty instead of smooth.

And there were two flounders, swimming more or less together: 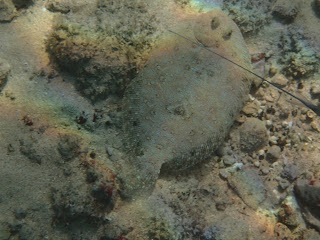 Of course, they were close, but not close enough to be in the same photo. Drat.
And I'm calling this one "The Only Way to eat Tako" 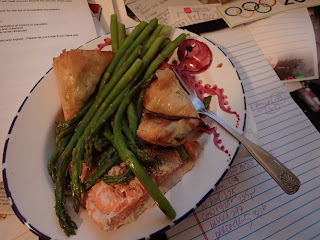 Yes, we had salmon, asparagus, Spanakopita, all on my octopus plate! 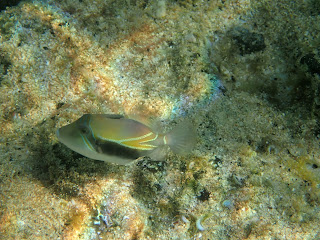 This little humu was about 2 inches long.  It had a companion, perhaps a brother or sister? 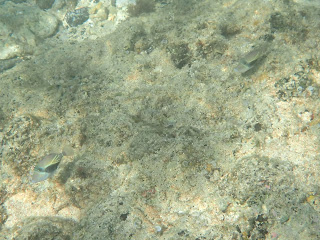 Not quite an Eagle Eye Challenge..but close. This eel I might call a challenge: 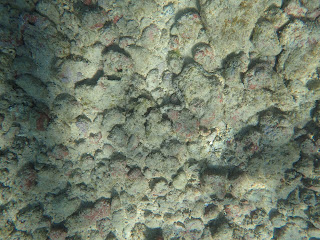 The eel is mostly white-ish and is curled around a rock.  This will help you: 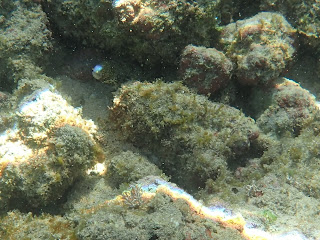 Well, maybe not! This is the face..
And as is only appropriate at this time of year, the Christmas wrasse: 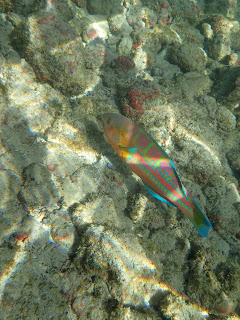 Love it when the light makes bars on the animals..nice contrast.
And speaking of the light: 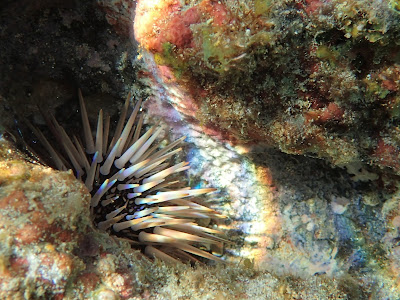 You can see rainbow colors on the urchin's spines, too.
And I'll leave you with another Monk Seal photo: 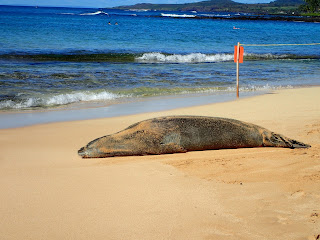 They sleep so soundly, you can't tell if they are alive.  Until they raise their heads...or scratch.