Alex and I just decided to go try out Robs Good Times Grill, so this will be fast!  We are celebrating me finding a job.  YES!!!
This is what I saw today in Poipu:
Box fish: 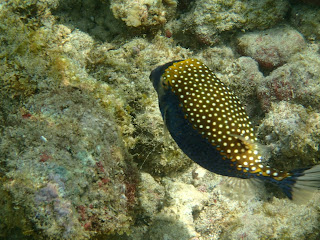 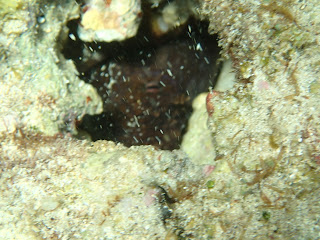 Just his little eye looking at me.  And junk in the water... There were still waves, but though the water ran me around a little bit, I still enjoyed myself.


Especially after an octopus and then a hiding Spotfin Scorpionfish: 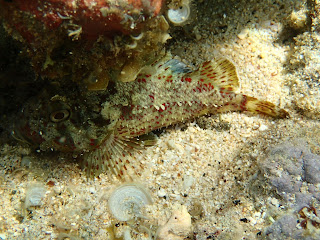 Several Cowry shells, none of which I picked up to take home: 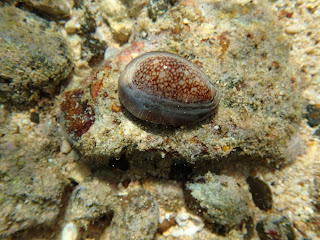 This one I actually did pick up and thought it felt light, so was probably empty.  But I couldn't be SURE, so I put it back down... :(  Better safe than sorry...

And a very green flea bite cone shell.  And no, I didn't pick this one up!  Not only did I think it was occupied, but they have poison. 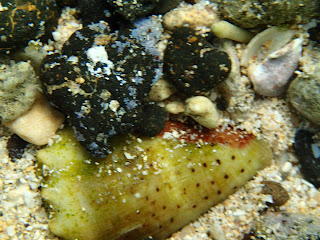 There was a huge Monk Seal snoozing on the beach or as Alex calls them, a Lump Seal. HA.  None of my pics turned out, as it was snoozing on the little island and I didn't want to get very close.
Lastly, there was another Juvenile Rock Mover, this one not green: 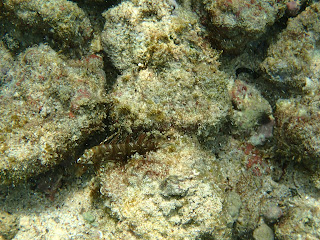 They are def harder to see when not green.  This one stayed very close to the rocks, too.

A nice surprise snorkel.  And I had a very nice talk with the lifeguard, regarding those signs NO SWIMMING that they put up.  They are trying to get folks to not swim in the tight area where the rip will take you and dump you downstream.  I said that I agreed, we don't want drownings.  I told them that I can usually get around the rip, but found out that people, once seeing someone in that area, will go in, even if they are not hip to the problems.  The lifeguard said: Yeah, people are like lemmings! :)

So he suggested entering in front of the Waiohai, which I did.  Then I sneaked around to where I wanted to go...

Any day with an octopus is a good day...