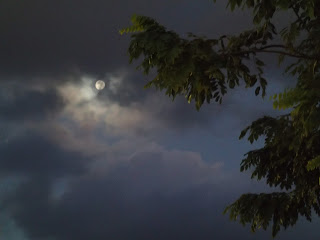 You will doubtless have heard and/or seen the Super Moon recently.

With my little Olympus TG-2 camera, there is a sort of telephoto lens, but not of the same power the bigger cameras have.  So I got around this by taking a photo of the near stuff and getting the moon as an added benefit.

This photo was at the Walmart parking lot here in Lihue.  I was there buying Finding Dory and when I got out of the car, looked for the moon.  Here it is!

As you know, Finding Dory has an octopus, so of course, I have to have as many people as possible see the movie.  Not that it's true to life, but it is comical and entertaining.  And be sure to watch the credits: the octopus gets up to some amazing disguises.

And before we go underwater, look at this partial cone shell: 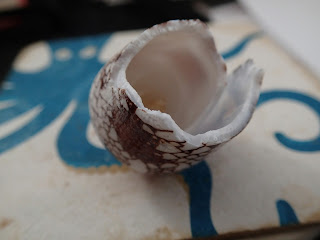 I found it while snorkeling the other day.  See how thick that shell is?!  I was working to imagine what animal bit into that shell.  WOW.  I'm thinking eel, but I wasn't there for the shell's demise, so am uninformed about who ate it.  I guess it could have been dashed against a rock, but I'm thinking predator..


The light played some tricks yesterday: 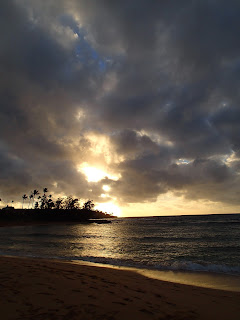 Well, the clouds did, I guess.  But you can still see the palm trees and the light.  I really enjoy what God does with lighting and wind.  What was a glassy pond the other day was turned into a wavy, current-filled ocean yesterday.  I got into the big pond and was immediately swept down the line in the current.  Thankfully, I had watched the water before getting in and knew what it would do.  So I swam at an angle to the current and was able to get to the place near the rocks, where I often see cool stuff.

But that was only after praying for safety and reading the sign: 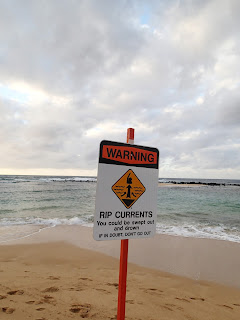 If in doubt, don't go out!
I did await more people on the beach, instead of getting out at 7, it was 8ish before I ventured in for my 3 hour swim.

I am hopeful to be working before long, so I am taking advantage of the option to swim.  Since my sweetie didn't have to work down south, I grabbed the car for some R&R. 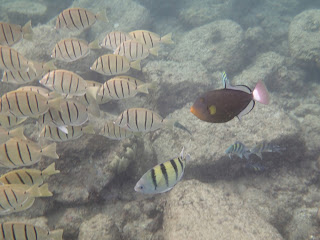 They are often seen following groups of other fish, perhaps hoping for some prey.  I really must check out more about food....I have no idea what these pretty fish eat.  Note the Sergeant fish accompanying the Convict Tangs...stripes on both, but so different!

I did find several shells, one of which was a Hairy Triton, I think: 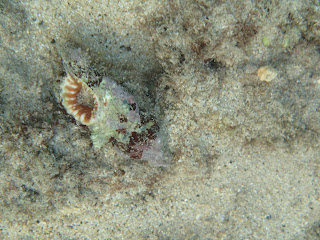 I would love to find an empty one of these shells, but didn't. I am pretty sure there was someone inside this one.  It is disguised by sea gunk, so it looks a lot like the bottom.  And speaking of looking like the bottom....

I disturbed this Lizard Fish by picking up an operculum: it zipped a foot over and buried itself immediately in the sand.  See it? 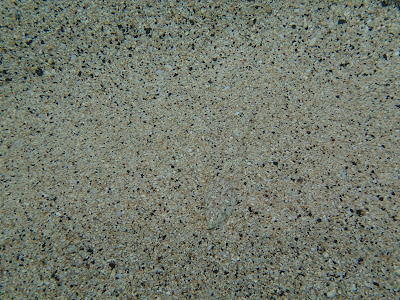 Just its head is showing.  It's definitely easier to see these guys when you witness them moving, too.  They do have quite good camouflage.  And speaking of that, I'm thankful to have spotted 2 octopuses: 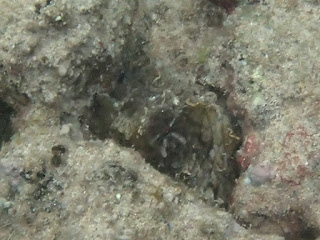 Its eye has the radiating white lines coming out from it.  This one sat quite still.  I even twinkled my fingers at it, hoping it would be interested.

And octopus #2 was in the kiddie pond: 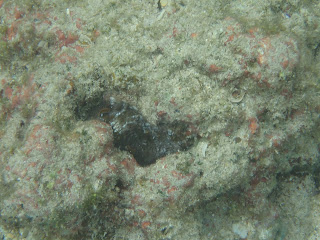 I was never able to get very close to this one...it was in stealth mode and slid down when I tried. 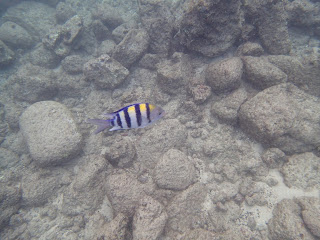 Finally remembered to look this fish up: It's an Indo-Pacific Sergeant! Very pretty and nice colors.  These are the fish that rub themselves against a rock.  I'm thinking it's egg-related, perhaps.  Mostly because they do charge other fish when they try to get into the area. So it appears they are being protective.

Saw two scorpion fish too: the Devil Scorpion Fish was hiding inside a coral rock: 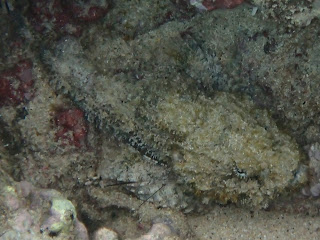 It was pure whimsy that I found this one.  It was, as I said, hiding inside a rock, perhaps awaiting darkness or a prey item.  It came out a few minutes later: 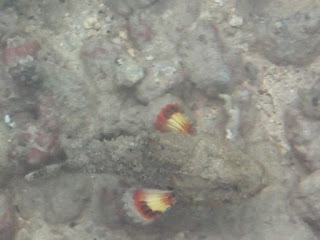 Love the hidden bright colored fins...When it is just sitting, those colors are disguised.  Supposedly, the bright colors are a warning to stay away.


The other Scorp was a Spotfin Scorpion Fish.  It too was at first hiding inside a hole in a rock: 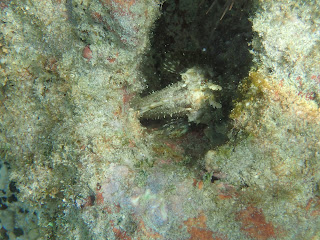 You can see the fringe on its head, near its eyes.  It, too, came out later: 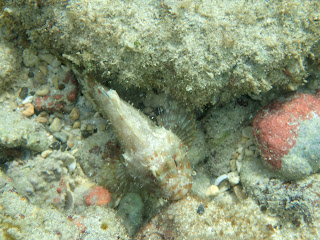 You can see the spots where it gets its name.  As with the other one, a face only a mother could love! 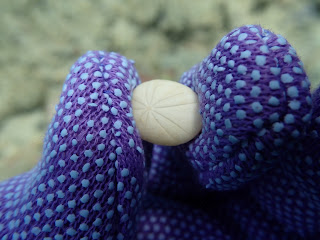 I forget what these are, but I surely do enjoy finding them.  As you can see, compared to my fingers in the dive glove, they are tiny.  I have seen them much larger, and broken by predators. 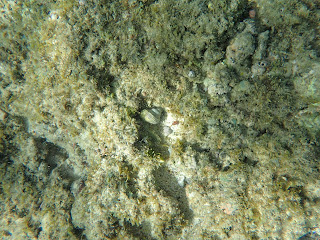 In the center of the shot, there's a Turban Shell.  I think that this shell most often encounters predators...they have the white operculum that I collect.  So that either means someone ate the animal or the shell outgrew the operculum and made another.  Of course, I prefer the latter answer.