OK, I'll admit it: I was rather hoping that the nudibranch that was new to me was also unidentified.  I'm dying to name something after us!  Nudibranch Hazlettii or something like that.  HA.  It was not to be; at least not this time.  It was a Spanish Dancer nudibranch.  Very beautiful.  Here's proof: 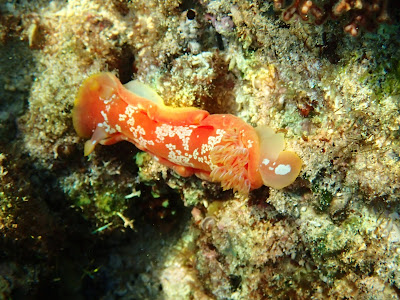 I was so excited when I spotted this one, moving slowly along the reef. I have seen video of them in the water column, twisting along to move.  The head is on the left...you can see the 2 protuberances (not sure if they are feelers, or ears, or what!)

I had to pull off the road while driving down to catch some of God's rays: 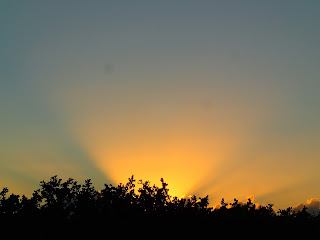 What a great show.  I just now wandered outside to see if I could catch the almost full moon...but at 3:55, it was too dark.  With my camera, I have to have enough ambient light to catch a tree of something with the celestial brightness.  I'll try again after writing the post.
OK, you talked me into it: one more nudibranch photo: 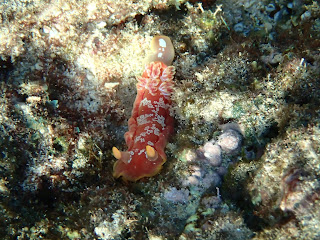 Not to make too much of the little guy, but s/he is more brightly colored than the octopuses...Mind you, I'm not replacing octopuses with nudibranchs...they are both very much God's wonderful creations.  (And in case you're unfamiliar: you pronounce it New-dee-brank. It means naked lung.  At the back of the animal, what you see that is waving in the breeze is the animal's lungs.  Too cool, right?!) 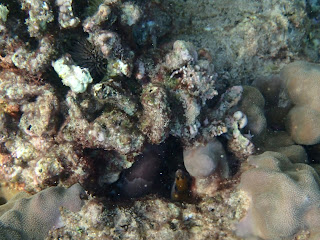 If you peek into the hole in this coral head, you'll see the snout of an eel. It was resting in the former home of my regular octopus.  Bad, bad eel!!  But just a few minutes later, I saw an octopus nearby, so I'm hoping that the octopus was just made homeless by the eel and not made into a meal... 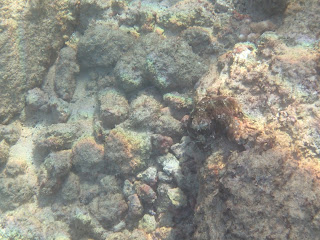 He's out, on top of the rocks.  Didn't appear frightened by me, so that's all good.


There was also a gathering of Cornet Fish: 8 of them. 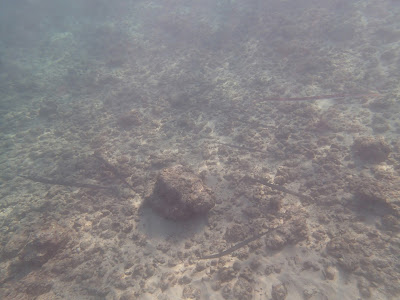 They appear like
long cigars.  I was happy to be able to catch them all in one shot.  They do move around very stealthily, so this was kind of good timing.
And maybe this was a Valentine's day thing: hadn't seen it before. 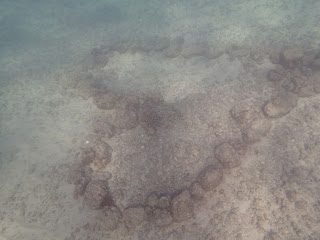 Don't know when it was put there, but keep in mind that it's in about 8 feet of water, and probably was pretty hard to do!  Those rocks aren't light and whoever did it would have had to hold their breath while depositing the rocks. 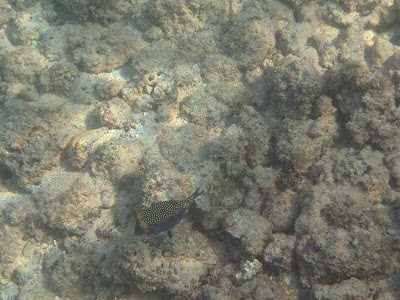 Cute little male Trunk Fish.
There was also a Scribbled File Fish....all alone.  I am accustomed to seeing them in pairs, so not sure what happened in this case: 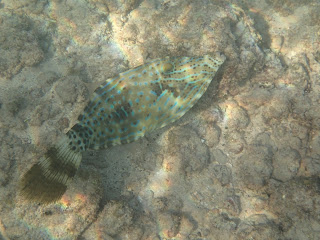 I was tortured a couple 3 times during this swim: kept finding shells that were pretty and I thought they were empty, but didn't want to take the chance of killing the animal IF there was one inside, so I put them back down. 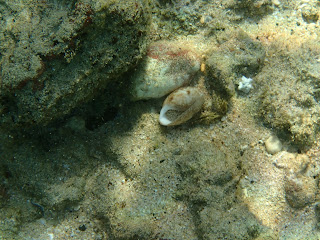 These shells are super thin.  So perhaps that's another reason not put harvest it: it may have broken in my little dive pocket. 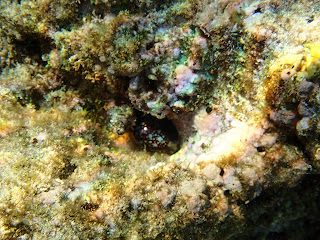 This Cowry was def alive..it was hiding under some coral.  The possibly empty ones are upside down on the bottom.
Octopus #2: 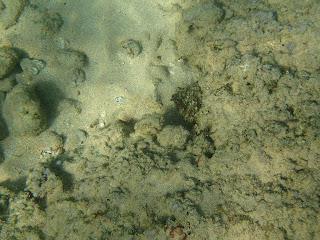 See it?  Hiding near rocky background.  It did pop back under when it saw me.  That's one of the many things I love about octopuses: they are interactive.  You move, they move.  There have been a couple who "peeked" out at me too. Always makes me smile.
Octopus #3 had so many shots that I have 8 photos noted down to include.  I won't bore you with that many, so here's one: 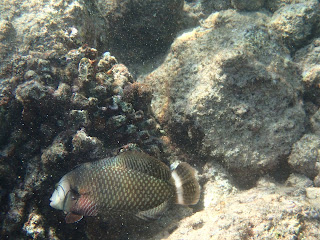 You'll no doubt see the fish first (Adult Rock Mover Wrasse), but look above its mid-section on the coral head and you'll see the octopus.  He sat pretty still.  It intrigues me that here in the water near Poipu, I see octopuses more in association with Rock Movers...on Oahu, it was usually a Trevally that is following the octopus around. 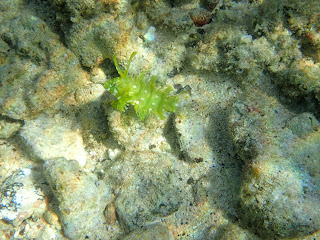 The "seaweed" is a Juvenile Rock Mover Wrasse.  It moves around very much like unattached seaweed, so camouflage isn't only the behavior of octopuses. 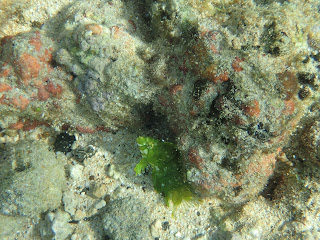 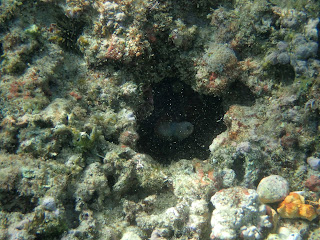 This octopus was in the Kiddie Pond...I would tell you the location, but s/he's pretty smart and slides down into its hole if someone approaches.  The orange rock is an indicator...Mostly I don't want to give away the location in case any reader is an octo-hunter.  I hope not.
Did see another flounder, on top of the rock: 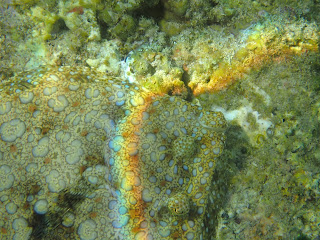 The rainbow effect was kinda nice.   Every now and then, the sun cooperates with me.  You can see the two eyes.  Little round balls.  If you look above that, you can see its mouth.  I still think it's way cool that the eyes start out on opposite sides of its head, then migrate to both on one side. 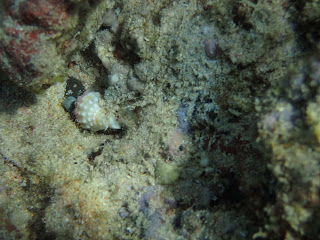 Awwww.  Pretty.  I'll have to look up this shell...maybe a basket shell, but I'm not sure. Don't quote me!
And my friend and I walked from Lawai Beach resort all the way to Spouting Horn and back.  We were treated to a Frigate Bird: 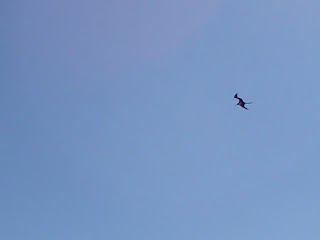 They are pretty, but I'm told they steal prey from other birds.  Also, supposedly, they only come near shore when there's a storm off shore.  We'll see!