OK, for those of you old enough to remember Steppenwolf (the music guy...), here's a picture for ya: 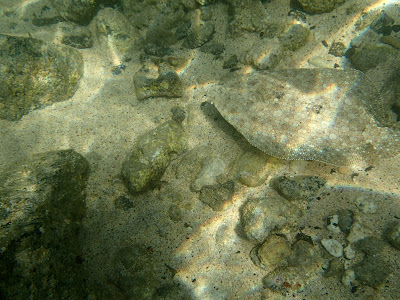 Doesn't it look as if this Peacock flounder is on a magic carpet ride?

He needed lifesaving too (I guess I am an animal lifeguard), because this was taken near the place where people get in and out of the kiddie pond in Poipu and a man was backing up without looking...while walking on the sandy bottom.  I told him he was about to walk on a flounder and his wife took in a breath as if she were horrified.  Well, I was too, but he did stop and apologize.  It's all good.


For those of you not old enough to remember that music, think of Aladdin and his magic carpet. Same thing... 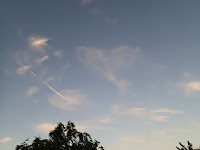 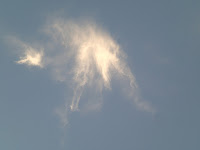 God does amazing things.  I don't know much about how clouds are actually formed, but I enjoy thinking that Jesus is up there, painting.  He has quite an imagination, too. 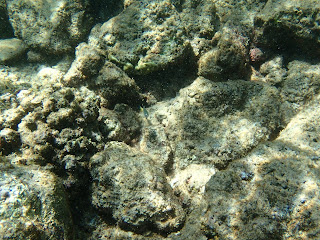 I am working on getting to know my new computer..without Photoshop! :(
I was going to print this with the Brighteye Chromis enlarged, but it's not to be.  (One place I don't want to add stress is in my blog.)
So look at the middle of the photo, perhaps click on it to enlarge, and you'll see the little fish, that's so quick, it is usually hidden by the time I get my camera turned on.

Two octopuses! Our condo is being painted, and rather than sit around the house, listening to off-key whistling, I thought: Hey! Why not go swim?  Darlin' Darlin' had to go to Poipu to work, so I caught a ride.  Unfortunately, his work got canceled, so he got to stroll around as I swam, unbeknownst to me...I was happily enjoying all the animals:
Octopus #1: 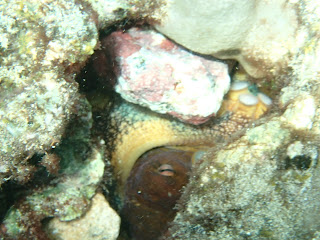 I only saw this guy because it was moving around the pink rock that in this picture looks as if it's about to fall on its head!  But really, it was moving the rock with its tentacles, rearranging the furniture.  And people wonder if octopuses are tool users.  OF COURSE they are!!
Octopus #2: 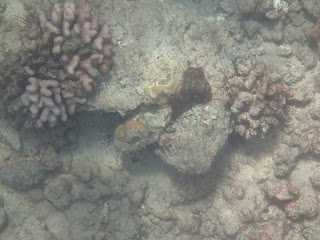 In between two coral heads.  Just sitting there. This was in the deeper part, again, so I wasn't able to get too close.
I think this might be the same octopus that was around the Rock Mover Wrasse a few snorkels ago...Glad to see it's still around.

Speaking of Rock Movers, here's a juvenile, looking all seaweedy: 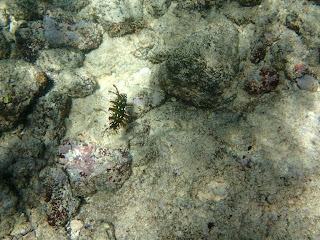 Isn't it amazing that later, they look like this?: 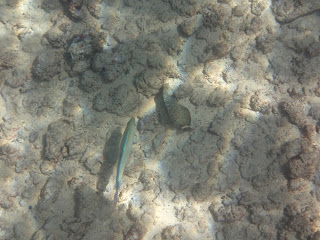 Cruising with the bluefin trevally.  Not sure why this Rock Mover wanted to rub against the bottom.  Seemed oddly unproductive, but there's a huge chance I just am not tuned into the fish way of things.

I was also treated to a glimpse of the Hawaiian Hog Fish, a fairly rare sighting.  OK, I haven't seen any since I've been back on Kauai: 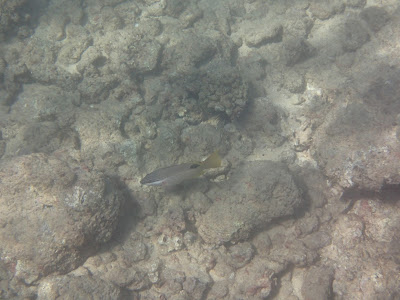 Pretty yellow, stripes, and that black on its back.  There were 2 Pinktail Durgon following it, but it darted under a rock.  It had a piece of white-something in its mouth, so I'm guess they were trying to steal its prey. 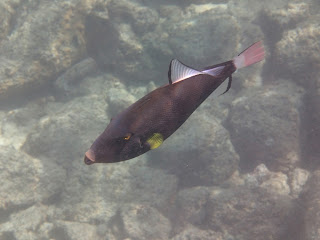 A lovely fish.  Usually very shy, but I found several willing to be photographed.  Well, okay, they really didn't have much choice.
A Box and Rocks: 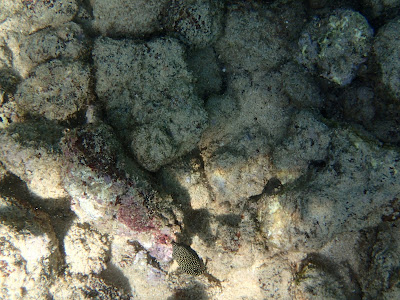 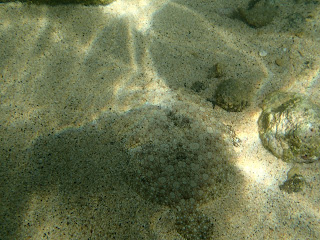 I know I started with the flounder, but this shows hiding in the sand....at one point, I really couldn't see it, because it blended in so well.
Blue Wana: 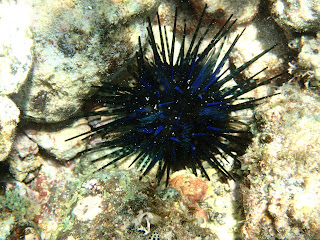 I haven't been able to capture the blue color before.  My fave color of all time.

If you see these, please don't touch.  Those spines will hurt you.  Just another reason I'm surprised people walk around on the bottom.  A self-preservation nightmare. 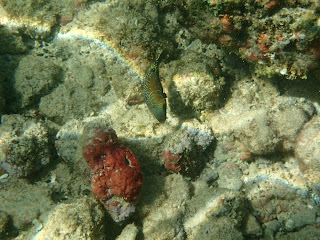 Another of my fave fish: The Ambon Puffer.  Also one of the very few that I remember the other name for it: Canthigaster Amboienensis! (OK, I did have to go online and look up the correct spelling of that last part...can't lie.) 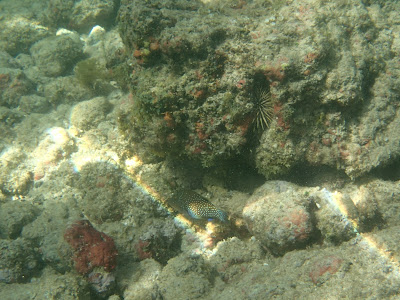 I know it's not a great photo, but I love the blue color on the ventral fin...electric blue.
What a treat!
I did catch a shot of the needle fish 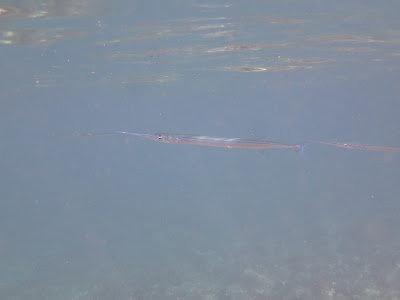 They do look at ya! 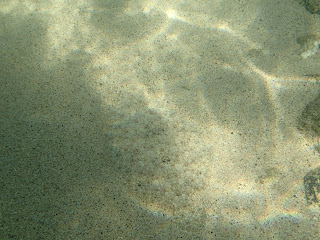 Told you that the Flounder camouflage is good.
Must be off to cook breakfast for my Marine.  Happy Marine Corps birthday, men and women!  And thank you for your service!