3 octopuses and a scorp!

Once again, I took too many photos!  In my defense, I was in the water for 3 hours, so I guess that's a good excuse.

Also, God was amazing in His provision, so I had to record them all...

I am working with my new computer and new programs.  Seems as if it will all be good, but I am learning somewhat slowly.  Please bear with me. 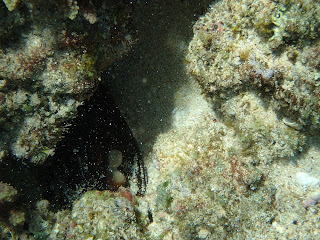 Yes, hiding of course.  You can see the siphon.  The octopus is covered in sand.  Good camouflage, I'm thinking. 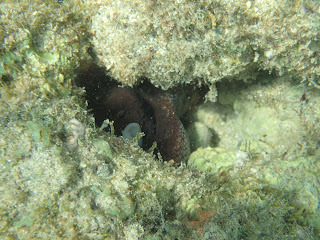 A big adult.  I hope my pal Royden isn't reading this post...he would go and harvest this guy. I shudder to think about it.

A box or trunk fish and a Christmas Wrasse: 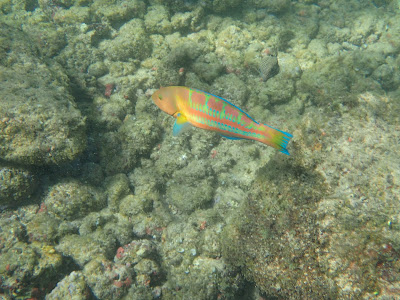 When reviewing the pix, I almost missed the trunk fish, since it's not as bright as the Wrasse..I surely do enjoy the shape of the box, and especially that they are so protected by their bony body.


This photo of Wana attracted my attention, but I didn't see the crab in the shell until I got it all home. 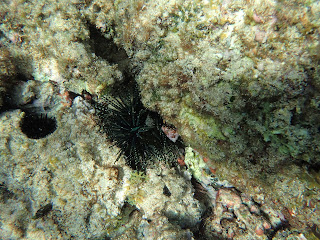 You can understand how I might have missed seeing the crab when I was taking the photo.  Click on it to see the crab in the little pink shell.
A juvenile Yellow Tail Coris: 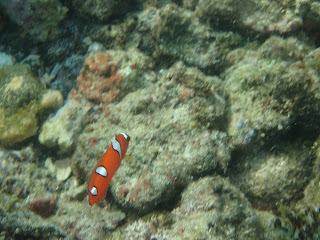 You wouldn't guess the name of this fish when it's a Juvenile.

Not much like the adult.  But they sure do stand out on the reef!


Here's the small Scorpion Fish.  It looks larger in the photos than it actually was....probably about 7 inches long, tip to tail: 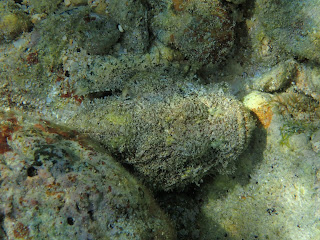 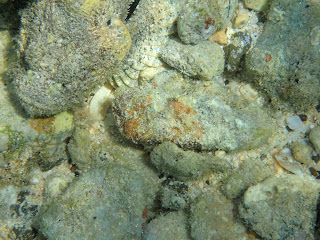 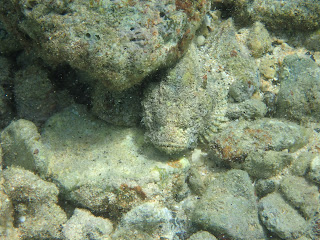 Looks kinda mean, doesn't it?  I wish I knew how to tell whether it's a male or female..

Before I forget, God's Rays: 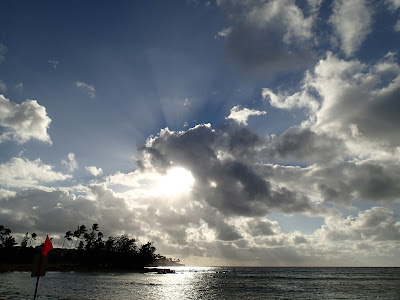 Every time I see this, it takes my breath. 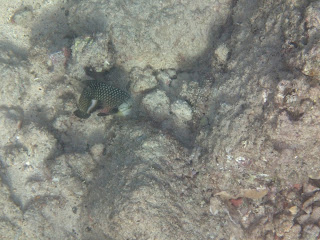 The Wrasse distracts you from the octopus, no doubt: the octopus is just a bit to the right of the center of the photo, looking all like a rock.

I saw this octopus again a bit later.  At first I thought it was another octopus, but the Wrasse was still swimming around, so I'm thinking it was the same one.  If only they would come when I call their name, I could be sure.

A Scribbled Filefish did swim quickly below and past me. 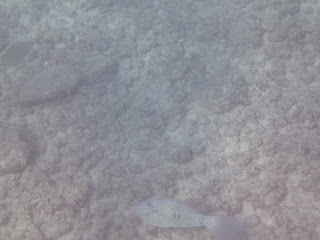 They have such a pretty design, with the blue lines and spots.  Also, the large size helps.
A Pinktail Durgon came by too.  I'd say they are the most shy of all the fishes: 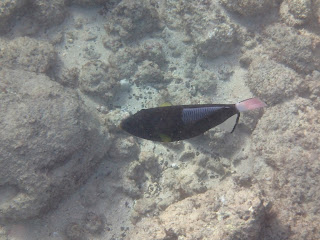 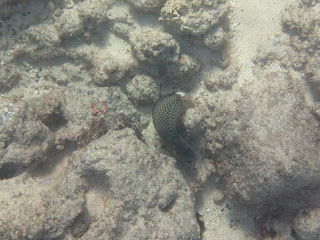 You could almost miss the octopus, but you definitely can spot the Rock Mover!  The octopus is to the left of the fish, in a crack in the rocks.  This is the one that I first thought was a 2nd octopus.  How could I tell?

They were having a boat race, too.  I don't see this very often! 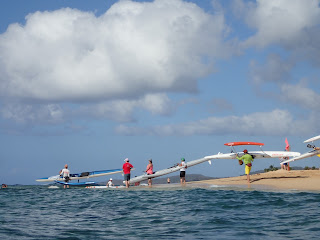 It's fun to take these while I'm in the water; gives you a whole different feeling...