A Mystery and an octopus 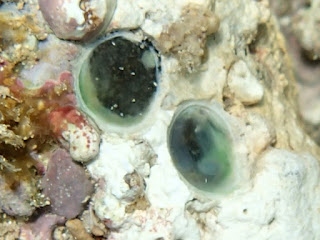 This is the mystery...what on earth (and in the sea) are these?!  They look rather like eyes.  But also I was thinking maybe they are some kind of egg, with a clear protective covering over them.  I found them in the top of a rock underwater.  Darned if I know what they are!
And then, the octopus.  Saw it almost immediately upon entering the water.  But it was a small one, so quite nervous about me looking at it. 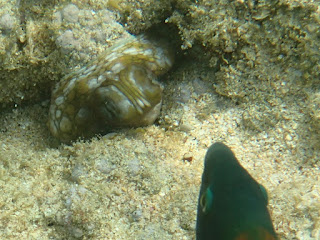 It might just have been nervous about this wrasse, too. They were having a stare-down.
Once I moved away a little bit, the octopus slid up, almost like it was standing. By that time, the wrasse had lost interest.

The Hawaiian Cleaner Wrasses were also busy again today, working on a Parrot fish's teeth, then on some convict tangs: 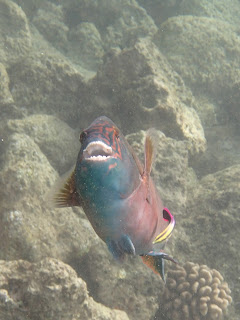 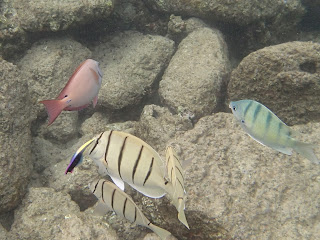 Even convicts need a good cleaning apparently.  Check it out though: the Cleaner Wrasse looks as if it's cleaning something off the Tang's eye!  Now that would be freaky.
Yellow Tail Coris juvenile: 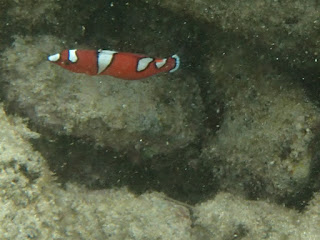 I guess red is a thing.  The adult is very pretty also.  As are these pencil urchins: 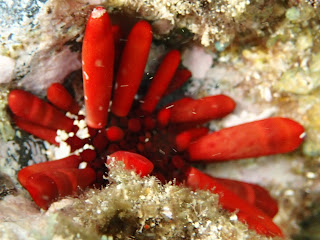 Very pretty. Love the colors and the fact that some are small and some not.  Guess they regenerate once one is broken off..
Nice humu: 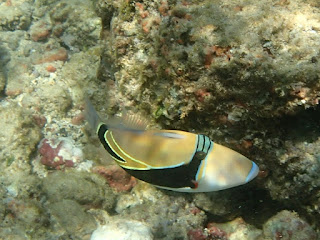 Yes, really lovely.  This one was medium size, so wasn't very afraid of me.  Once they go into a hole to hide, the spike on their back makes it so you can't pull them out.  And no, I haven't tried to!  But that's what I'm told.


A trio of Moorish Idols swept through the scene: 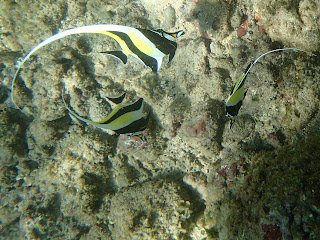 So lovely with the long trailing dorsal fin....
A shell...the pointy end was under the rock. 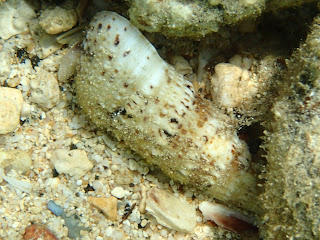 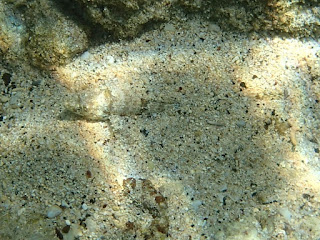 This Lizard Fish had just scooched down into the sand.  A quicker photog would have caught it on video...but not I.
I saw a school of minnows again.  Not sure what kind they are, but they looked rather blue in the light: 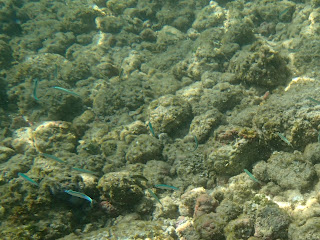 I do wish I knew what they are.
And there was an urchin that somebody had munched on, I think: 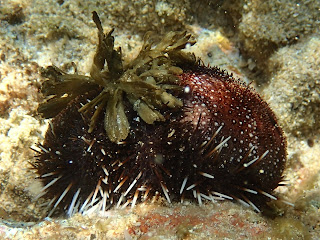 I did enjoy the Christmas tree effect...
And speaking of Christmas, here's the wrasse: 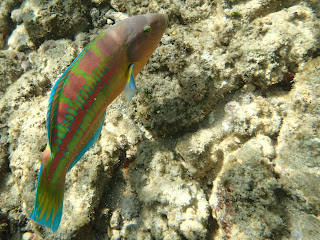 And I did see a Sculpin Scorpion fish, but it was in between two rocks in the surge area and I couldn't keep still enough with all the waves to safely take a photo.  Trust me on that one, ok? 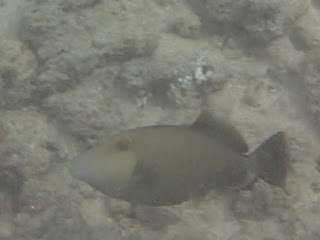 This Trigger was still in the area, but kept near the bottom, so the photo is just good enough to see that it wasn't one of the usual suspects....
Hawkfish were plentiful: 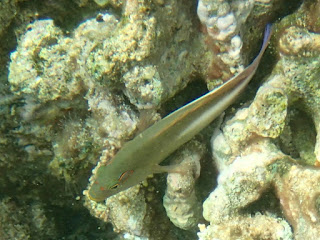 I like the color on the tail of this one and the eye liner.  Makeup can have an enhancing effect... 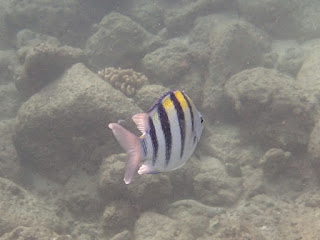 Indo Pacific Damsel.  This one was in a group, but there were also little critters in the water, which have a tendency to occasionally give me a bite, which then itches, so I didn't stay very near them...
And last but not least, another palm tree for my sweetie. (There were trunk fishes, but none of the photos was special.) 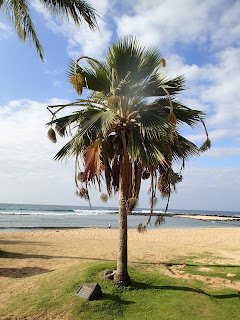 Try not to notice the drop of water that was on the lens...thanks!
I'm sure the little placard tells you what type of Palm it is, but I didn't notice the placard until I got the photo home.  If it's interesting, I'll tell ya next time. Have a great day.
Posted by octopigirl7 at 7:03 PM