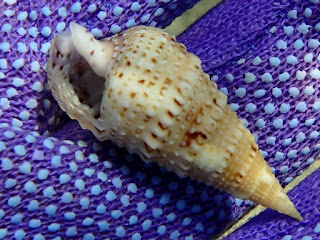 You can't tell from this photo, but I may need a new dive glove! In one of the pix, you can see my finger has worn through the glove. I showed a shell picture like this to a friend from work and he said: I know it's a shell, but what's that ugly purple thing?! HA. 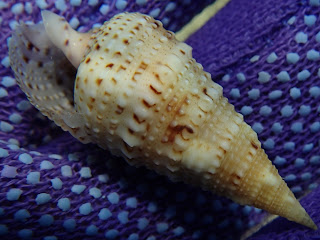 Just to tell you, I did my due diligence on both of these shells, and wasn't sure I could tell you which kind either one was! They are somewhat similar, but one is smooth and rounded in its steps and I don't think all the color and the bumps could wear off. I left both of them in the water, as I wasn't sure there was no animal inside. (I would not take 'em, even if it were just a crab!)  But note in the photo one down from the one below: see that hole? That's a possible octopus-drill hole.  So maybe the animal wasn't in there. But it's hard to tell and I'd rather err on the side of caution.. 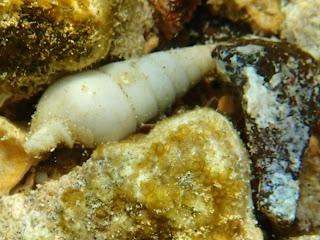 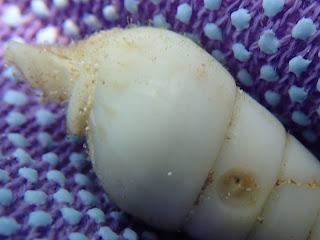 No seals today! I was surprised and now that I think about it, no turtles either. I have heard there are whales this early, but I haven't seen one.  Maybe I was too focused on the octopuses. Of which I saw 3!
Below and to the right of the photo is Octopus #2.  #1 was in a hole and while I knew he was there and could see some brown and some of his siphon, couldn't get a good shot. So I won't bore you with a brown blob in a hole photo. 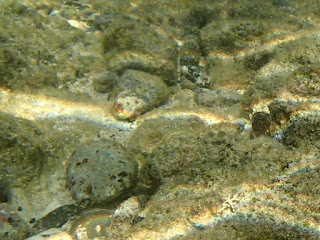 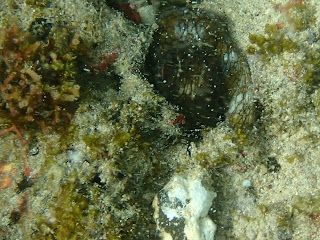 You can see its eye to the left, with red around it. 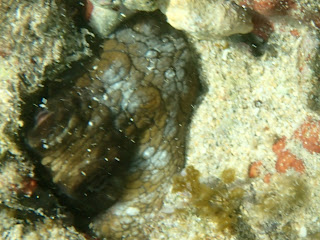 I don't know for sure the size of the #1 octopus, since it stayed in its hole, but it is definitely larger than the other two. These octopuses were kids. Awwwww.  And they only live a year or so, so I have a plan to enjoy them as much as possible. And just to be nice, Octopus #2 was afraid of me, so I left it alone after just a few snaps. This one above didn't seem to care that I was photographing it, as it didn't turn that dark brown and hide. 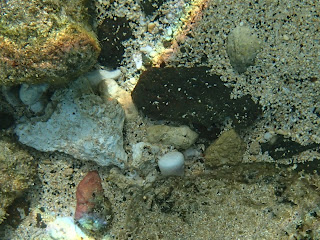 Above, a whitish Cone shell, stuck in the sand. 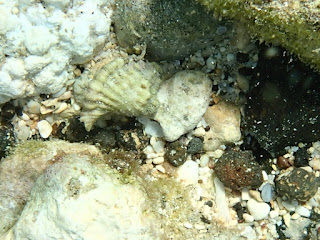 A hairy triton shell without its hair. The pale greenish shell, between the two white rocks. It was empty and is now sitting in its bath of bleach and water on my counter. Killing any possible bugs, don't cha know.. 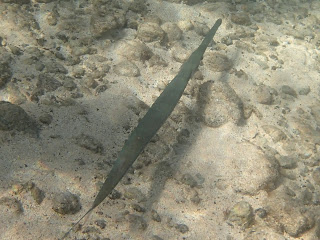 Nice big Cornet fish which was hunting. All they seem to do, really. 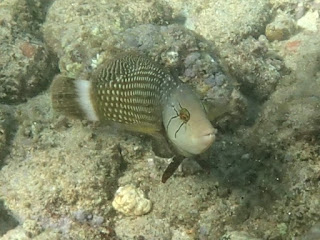 Rock Mover Wrasse showing clown face and maybe a tooth or two. These are the ones that pick up huge rocks, compared to their size, and just throw them around to look for food underneath. I once followed them, as sometimes they led me to octopuses, but not so much anymore. I still think they are cool. And tough fish. 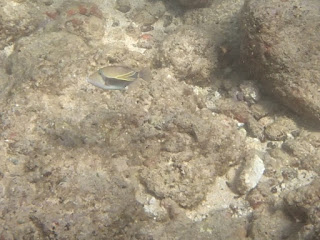 A Humu.  Tiny. That's why I left the rocks in the photo, so you could get a size comparison. 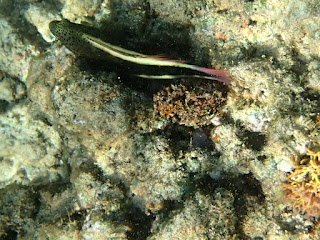 One of several Hawk fish I saw today. I liked the color on this one's tail.... 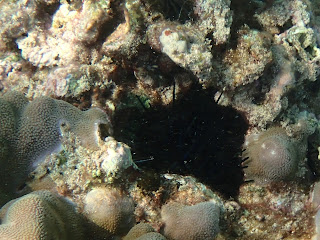 Urchin in what once was the octopus den, on top of a coral head. I don't know that they wouldn't share, but this urchin did seem to be taking up a lot of room! 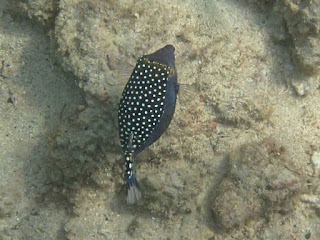 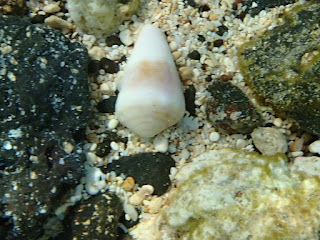 Above, another cone shell. When they are in good condition like this and with the opening down in the sand, I leave them alone. Not just because of their poisonous barb, but because I don't collect shells if they are in use. 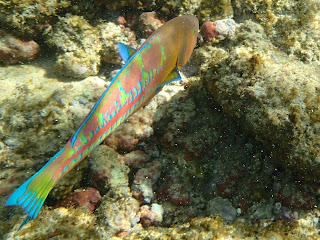 Christmas Wrasse.  I can see a nice set of sheets with this color pattern....hmmmm. Business op! 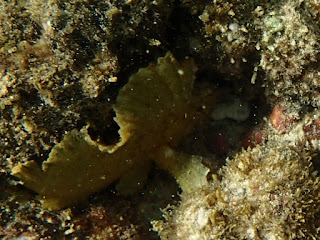 I was taking photos of the Leaf fish above and saw Leaf Fish #2, below! They were about 2 feet apart. The one below needs to do something with its hair... 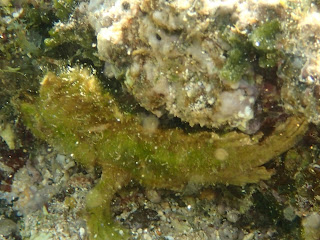 I think generally the same basic size, so perhaps siblings. Who knows? It surprised me to see two ambush predators so close together. 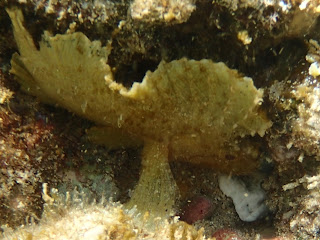 Below, Urchin, awaiting the opportunity to poke someone. And I know you are probably tired of hearing this, but just another reason not to walk around on the sea floor.... 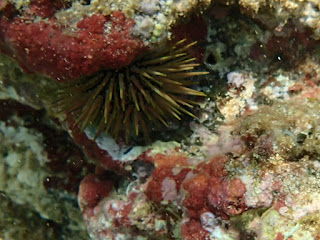 This eel, was trying to scare me off. 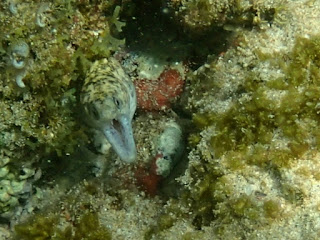 Not just an urchin, but also a cowry shell in the upper left of the photo. 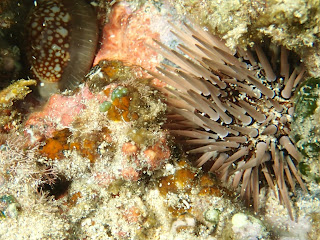 Spotfin Scorpion Fish, below. It looks upside down but it was me, trying to get a good shot. (For every good one, there are usually 5 to 10 bad ones. That's why I come home with 320 photos and only maybe 20 get into the blog...) 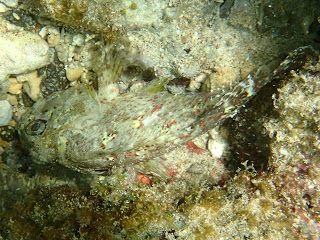 The eel below was abut 2 feet away from octopus #3. EEK! I was afraid the eel would find the octopus, so I swam away. I've seen a video of an octopus taking on a shark and winning, but it can also go the other way. I have a soft spot for octopuses (you may have noticed..) so I don't want to see them eaten. Not even after they are dead. And certainly not while alive! Shame on those people who eat live octopuses.  Bad, bad people!!! 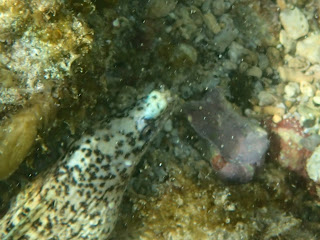 Cucumber. I thought it was pretty. 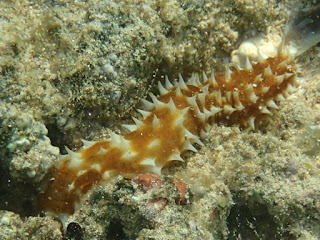 A nice little wrasse of unknown origin. I call it Plaid. 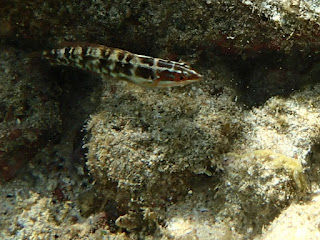 And a halfway decent photo of the needlefish. Yeeha! They are hard to capture with my camera. I know it couldn't be my fault. 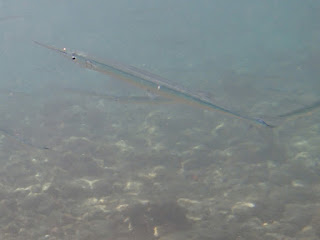 Speaking of fault, I took some pictures of cool clouds, but had the camera on the wrong button, so they turned out wack. Oh well. I'm thankful for all God gave me! And don't look for a post next week...I gotta travel on business, so no octopus sightings.  And I'll be sure not to visit any fish markets, so that will stay true....