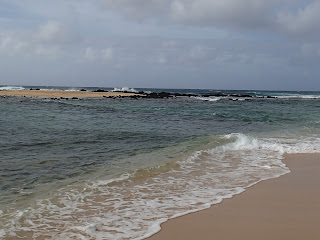 This is the place where the "kiddie pool" on the left converges on the deeper area on the right. At one time, there was a sand and rock path that let out to the island, but some storms took care of that. I guess the County of Kauai and State of Hawaii decided it wasn't important enough to fix. But that means if you stand there, as I do to get into the deeper pond, you get smacked by waves from both sides. And of course, they don't hit at the same time, so while they are fighting against each other, they fight against you.  And there's the rip to consider.  If you're not careful, you get swept down to the Waiohai beach. 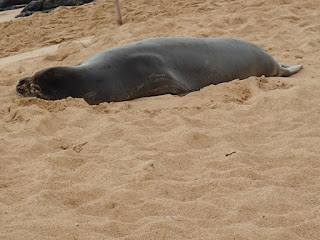 But that doesn't bother the seals, who are there to snooze. This one had a lot of sand in his eye, so at one point, he reached up with his flipper to scratch. Cute. 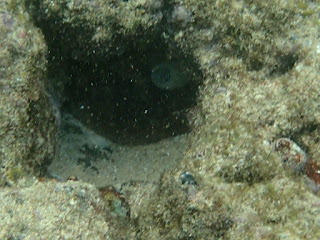 Octopus #1! You can see the siphon through which s/he breathes. Good hider, but I knew where to look. One of three. YAY. 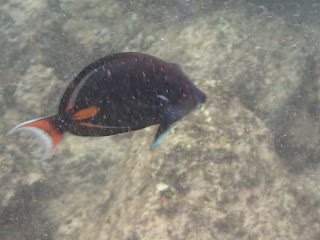 And now for the apology: I've been watching this fish for a while, reporting it was a white cheeked tang...wrong! It is an Achilles tang. Still pretty. But, not white cheeked.  If you get a chance to look on the internet, please look for the white cheeked tang. Very pretty fish. And you'll wonder how I could have mistaken one for the other..my bad. 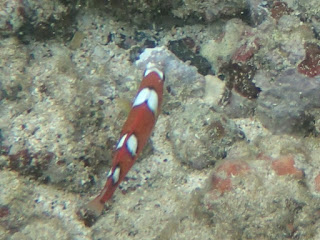 The one above though is the juvenile of the Yellow Tail Coris. No doubt about it. I recently saw one that had coloration between the two. 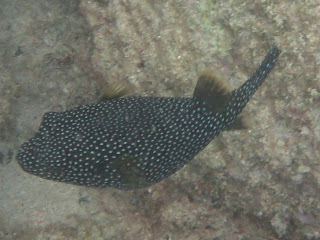 This is a very nice fish, the Guinea Fowl Puffer...kind of big...it reminds me of the Trunk Fish a bit with the bulgy eyes. The eyes are well camouflaged. 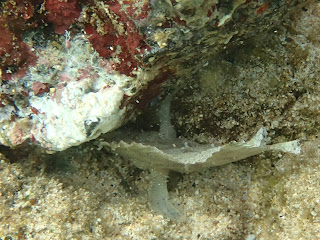 And the Leaf Fish. This one has been hanging at the confluence of the kiddie pond and deeper part. Hanging on for dear life, as it was being blown from one side to the other. It does what the hawk fish do: leans on its side fins. This one is a member of the Scorpion Fish family. So I guess it may have a poisonous bite, but I haven't researched it yet. 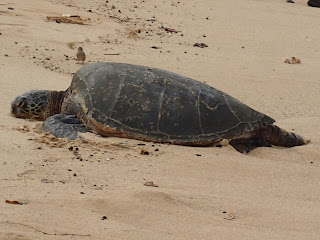 Turtle on the beach, snoozing. And a sparrow. I wonder if the sparrow was wondering if there was any food on the turtle's shell. Possibility. Or maybe it was just thinking how HUGE the turtle is, compared to itself. 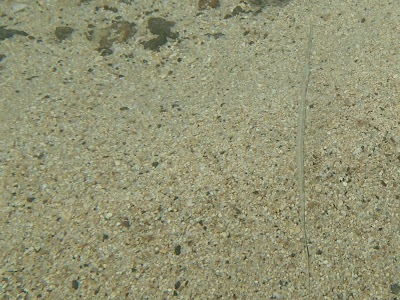 And the opposite of huge, above. A very tiny Cornet fish.  I at first thought it was a fishing line, and then I looked again and decided what it wasn't...It darted away. 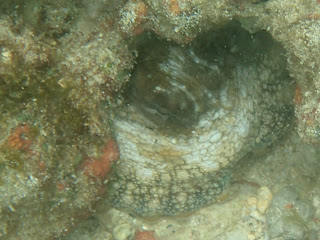 Octopus #2, to the right and below. Safely hiding in its den, out near the surf area. The eye in the photo has white lines radiating out from the center. Didn't seem too perturbed about my presence. 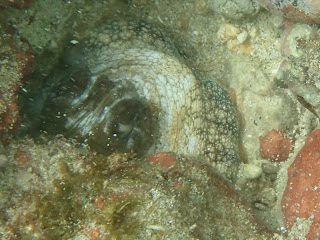 Stripes. You can't really describe a fish by saying it has stripes....so many different types of stripes isn't very descriptive. And there are head to tail stripes too. So many options. The fish just below are Moorish Idol and Convict Tang. 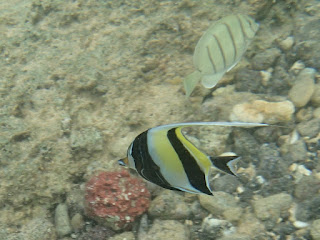 Below, the Sergeant Major. 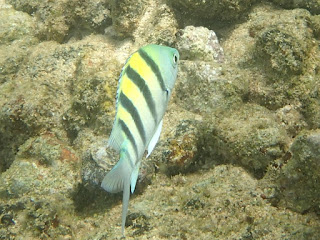 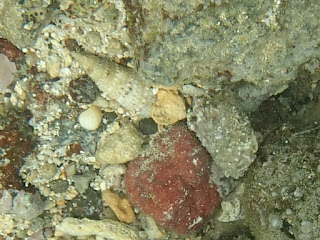 I do think they are pretty.  Look closely to the left and you'll see where the animal can come out. 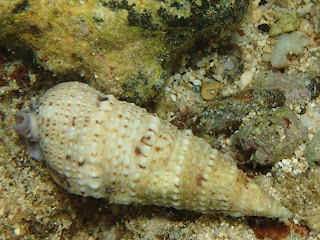 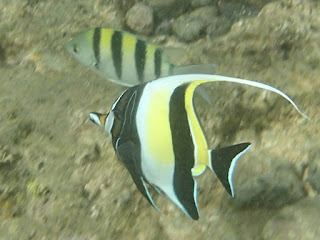 The Lizard Fish has stripes too. Sand colored. They are insanely quick too, if you disturb them, they are gone in a quick flick. 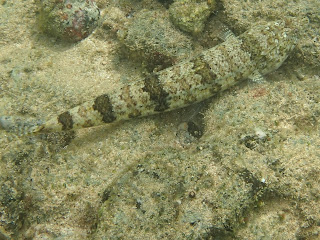 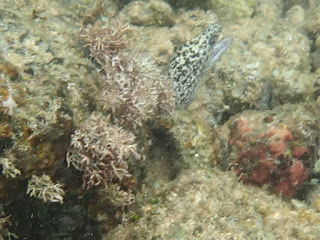 Nice flea bite cone shell. Probably alive, as it was in pristine condition. These I don't pick up.. 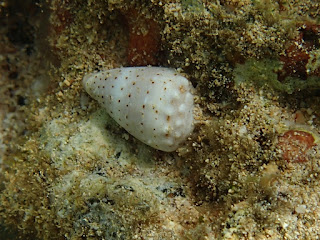 Below, Octopus #3. I was at first doubtful that there was an octopus in this hole, but then it blew sand out, so I was sure. If you look closely, you can see some tentacles inside the hole at the bottom. 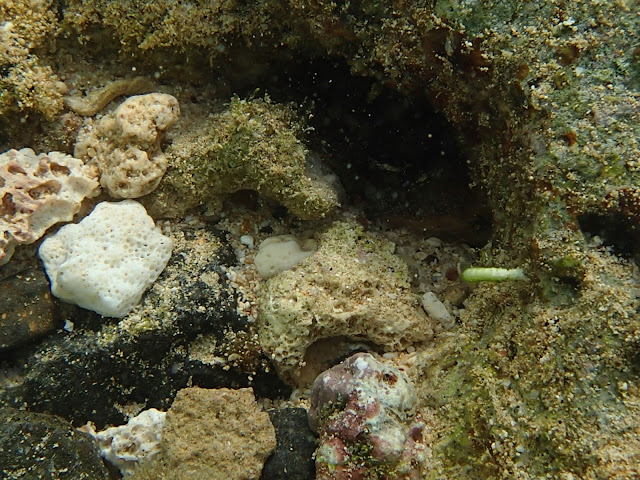 After the swim, I was so pooped from swimming against the rip that I couldn't even take a walk with my Poipu pal...Shoots. But nice swim. I had at first despaired about being able to swim, as it is quite windy.  But the water, while wavy, didn't really smack me, so it was an enjoyable swim. Thanks, God!
Posted by octopigirl7 at 6:21 PM