For those of you who may be newshounds, as I thought about what to post today, I was planning to tell about all the cool fish and then report that I also saw 6 octopuses! That's called burying the lead...giving all the info then getting to the important stuff!

So instead of burying anything, I saw 6 octopuses today! The only reason I got out of the water was because something was biting the heck outa me!!! I was scratching as I was swimming as I was taking pictures. What a mess! So I got out and ran, well, drove, to the Long's drugstore and picked up some spray Benadryl, the only thing that works. Even that wasn't really enough, so I stopped for a quick hello to my friend in Poipu and then drove home (within the speed limit, just saying I'm proud of that accomplishment!) and took a very hot and very soapy shower. Then put on more Benadryl. I don't know what was biting, but I do know I was irritated! And that's never good!

Kind of put a damper on the 6 octopuses, but I'm very happy now that I'm home and more or less itch free. 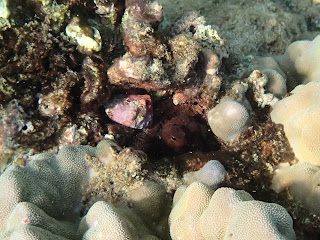 #1 octopus!
This was a big surprise: I checked out a coral head where I used to see an octopus. Recently, I have seen a crab in the hole on top of the coral head and for several weeks, I have seen nothing in the hole. So I was pleasantly surprised to see this small octopus today. 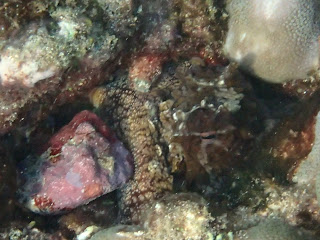 The pink rock just next to it helped me get some shots....I was at least 5 feet away, so the location point was helpful. As you know, octopuses tend to blend into the surrounding area. 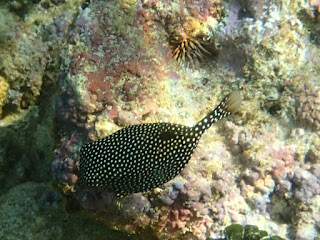 Nice little trunk fish. Nice to get her face for once! Usually they scoot away... 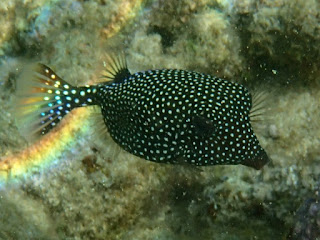 This is the Christmas Wrasse, called a Supermale! Wow, how many people can have that moniker? 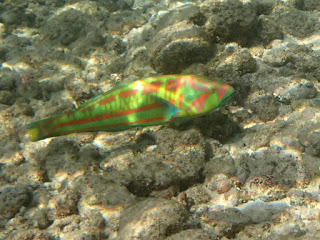 Octopus #3 maybe. I get kinda lost with which one was which. It's a nice problem to have..You can barely see its siphon. 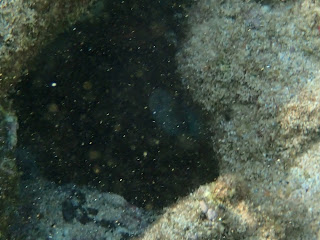 Juvenile Rock Mover Wrasse. The one yesterday was bright green and this one has more muted colors. Not sure why they are different colors. Maybe it's like some people having red hair or blue eyes. 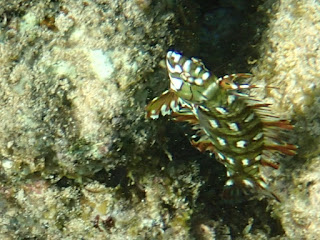 And they are quite bendy. 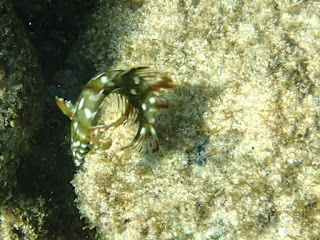 I swam up on this piece of coral. Since I like pink, I wanted to take a photo, and the eel and wrasse being there adds some interest to the shot. 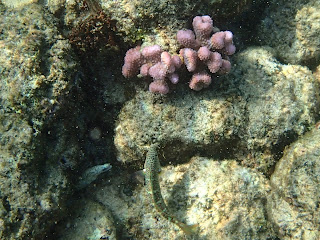 Spanish Dancer! Probably the same one I saw yesterday, as it was the same size...and basically the same area. When I wrote the photo down, I called it Spanish Dander accidentally. ha. 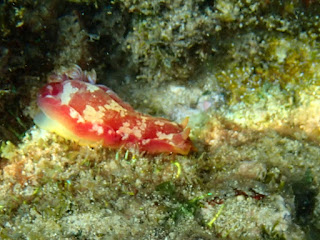 Needlefish. At one point, I twirled around and there were probably fifty of them in the group. Hard to count them, of course, as they are moving. It helped to have the Blue Spined Unicorn Fish near too, so I could focus on it. 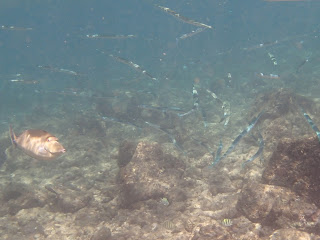 It's been a while since I included the Abudefduf. This is a young one, so is smaller and has lighter colors. 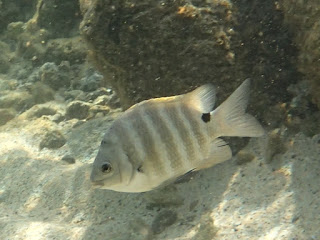 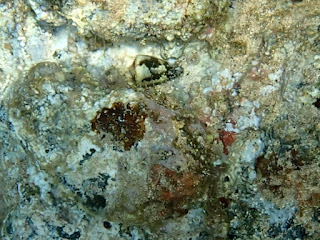 Maybe octopus #4...I don't know why I find them so fascinating, but I do. 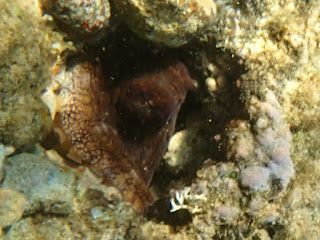 Trevally irritating the Snowflake Moray Eel. This is the most prevalent eel in this area. I always follow when I see the Bluefin Trevally, because they used to following eels when we lived on Oahu, but also octopuses. Mostly over here, they are following eels. Darn. I was going to say that I've never seen a trevally eat an octopus, but once, long ago, I was watching an octopus and a trevally was irritating it. Unfortunately, the baby octopus picked that time to pop up and the trevally snatched it. One mouthful. Sad. 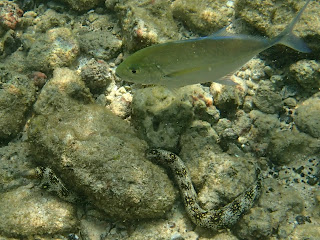 This was surprise octopus #5. Out near where the waves are breaking. A really small one, so very cautious. But s/he didn't turn that angry dark maroon, so maybe s/he realized I wouldn't hurt him/her. 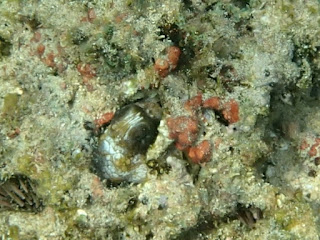 Again, having his den near the red rocks made it easier to keep track of where the hole was. 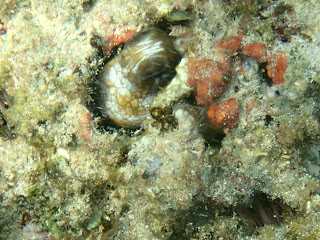 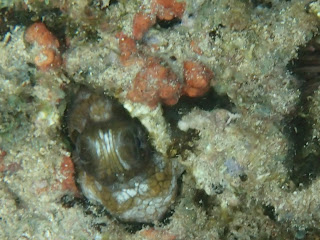 OK, you're probably thinking, enough of this octopus already! But I thought it was quite cute. Being so small and all. 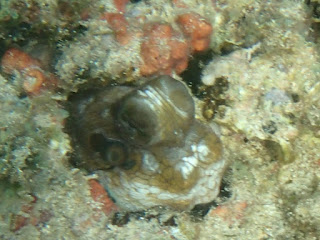 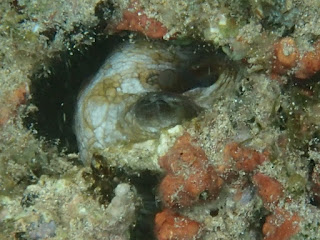 And speaking of small, here's a little Humu. Maybe 2.5 inches long, including the tail. 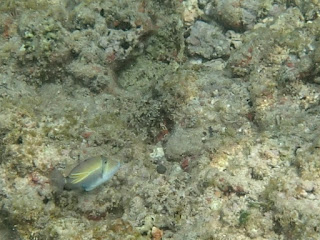 There were actually 4 Humu in this area, but the other one flew off.  The one on the left was being aggressive about something, so they were darting around the reef. 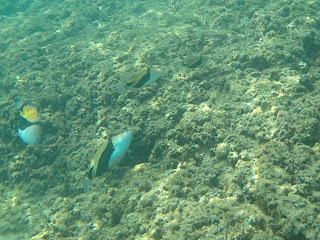 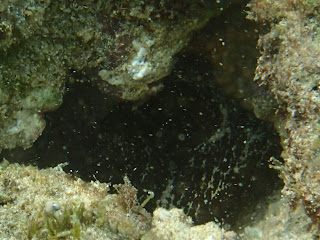 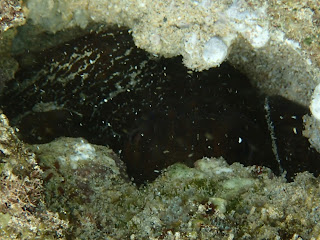 Christmas Wrasse pestering a Snowflake Moray Eel. These poor eels can't catch a break. I do think the fish follow in the hopes that the eel will find some good food. 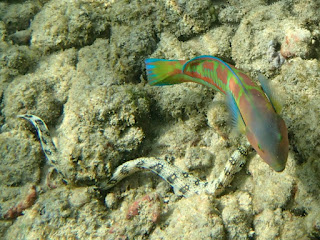 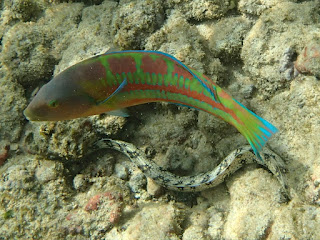 Clouds. Very nice. All I had to do was look up. 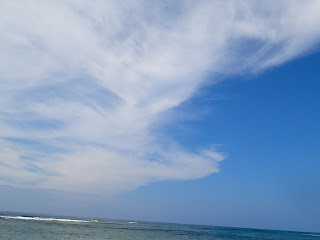 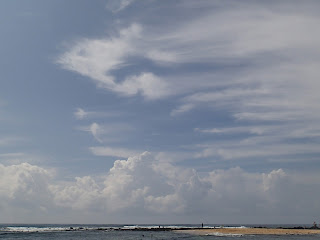 And this is when I was out of the water...I got some more bites and had to get out to shower and spray! But a very nice day of octo-sightings. And no one was being mean to the animals, so that was good too. Thanks, God!
Posted by octopigirl7 at 6:07 PM