I have been a slouch! I swam for 3 days and only posted about one.  So today, before work, I'll let you know what showed up. But first, yesterday, I was watching an octopus I had seen before.  I saw Teva's feet coming toward us, so I popped up and asked the lady if she would be willing to walk around us, so she wouldn't walk on the octopus.  She was very kind and acceded to my request. How nice.
Saturday's swim was also graced by octopus: two.
The first one was so small that I at first thought it was seaweed.  Well, it was about 10 feet below me. 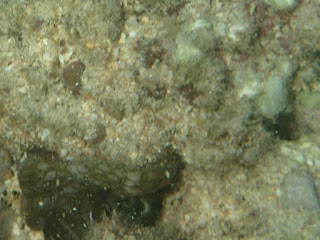 It looks upside down, but it was really just the angle of my photo. When the waves are moving me, it's tough to get close. This one I had to dive down for...and then pop all the way back up. Not easy, but worth it for this little guy. And it wasn't seaweed...
I also saw a Hawaiian Green Lionfish. Their bigger cousins are hunted to keep their numbers down, as they eat everything on the reef, apparently. Happily, I have never seen one of the bigger lionfish in the wild. 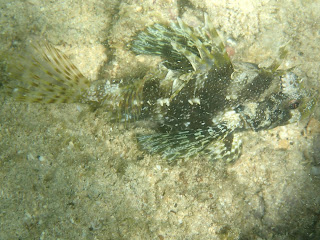 The spines on their back are what you need to worry about..and not walk on! Apparently they have poison. I told a lady who was walking in the area that there was a poisonous fish and she shouldn't walk. I offered to show it to her, but she swam away. I guess she either didn't care to see it or was afraid.  I think they're fascinating, but others' mileage may vary.


I also saw a Devil Scorpion fish. It was so blended into the seascape that I almost didn't see it: 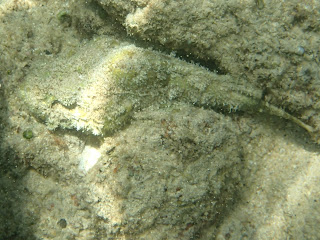 If you don't see it immediately, look at the right side of the photo: its tail. Then follow that back to the center. As I said, really well camouflaged!
Then I saw a cute pair of Bullethead Blenny.  Aren't you proud of me that I actually looked that up before posting?! 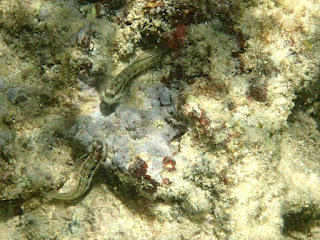 They were having some kind of fishy conversation. I was surprised that I got this shot, as normally, they run for cover immediately. Perhaps whatever they were discussing was more important than that big shadow overhead. 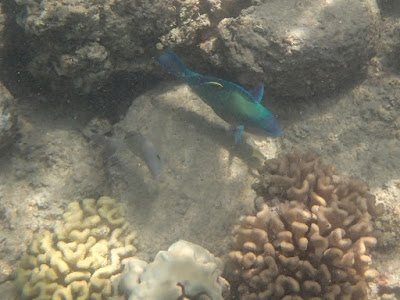 Parrot fish with its cleaner wrasse.  Do click on the photo...much better when bigger. 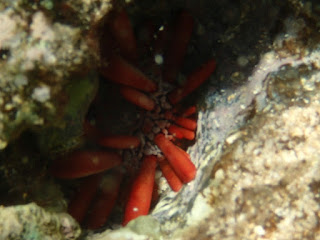 The Pencil Urchins mostly hide...this is fun to try to get a photo of, because the light is sometimes lacking. In this case, I think it worked out ok. 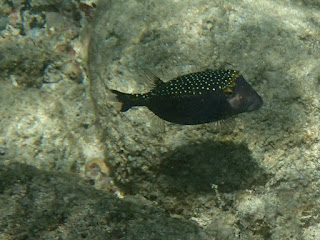 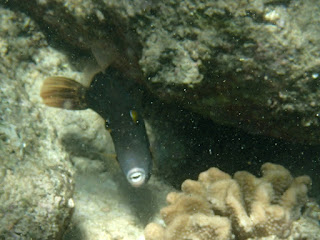 The Barred Filefish. Look at those teeth. Small mouth though. They eat coral. Or maybe what is ON the coral. 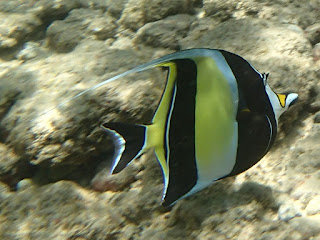 Finally, I got a photo where you can see the eyebrows of the Moorish Idol! I love these fish. Not particularly afraid, and so pretty with the stripes and coloration. Note the different yellow on the nose, as compared to the yellow on the body. 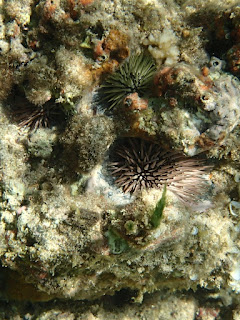 I enjoy the urchins when they are hidden in their holes. The better to miss their spines! I have been quite fortunate in not being poked by these, thank God! 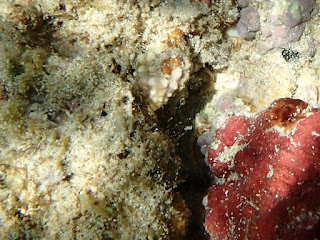 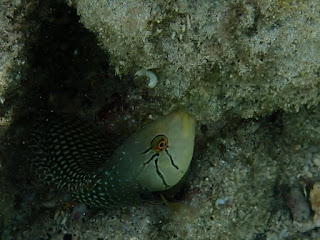 I always think of a clown when i see the designs on their faces. 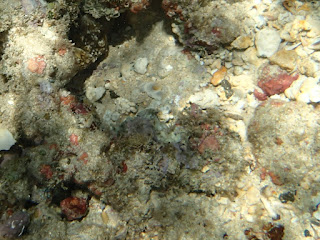 Upper left in the photo is octopus #2. So glad when I see an octopus.

And then it was peeking at me: 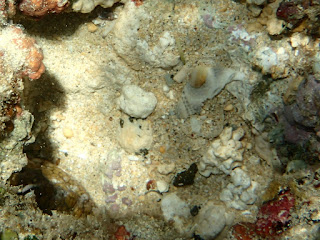 Lower left: look for the brown and white. It was hiding in a hole. You can just see its eye: a little slit in the pale tan. They will peek at you to see if you have gone away. 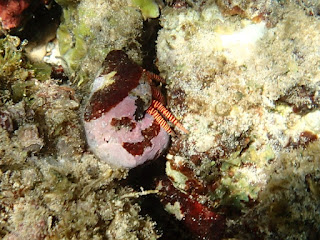 This is a hermit crab...it's actually called the Cone Shell Hermit Crab. And indeed, that is the house it was using.  The stripes on the legs give it away.. 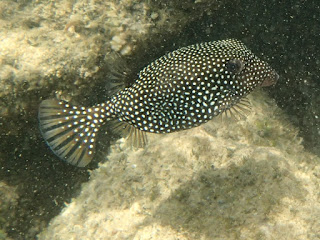 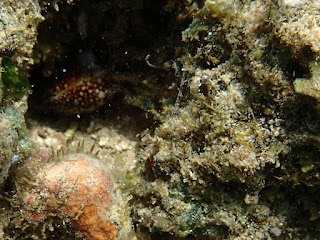