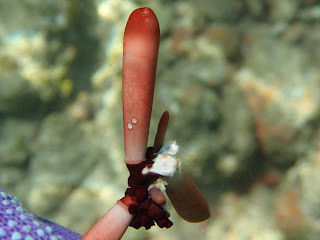 All I can say is: I didn't do it! But somebody ate this nice pencil urchin, leaving what looks kinda like an airplane propeller behind...I did discover that eventually, when out of salt water, the "pencils" turn beige/white.
Today was a 3 octopus day! Unfortunately, no fab pix, but hold on.  I'll show you my main octopus pix and then we can see the crab trying to break into a Turban shell.... 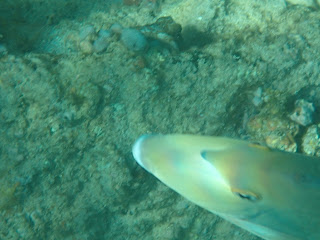 Of course, you might at first assume it's the fish that's the focus...wrong! Look directly above the snout of the Unicorn fish..that brown blob is octopus #1...just above and a bit to the right of the knob of blue coral. Yeah, he was hiding.  That is the name of the octopus game. But then, you know that... 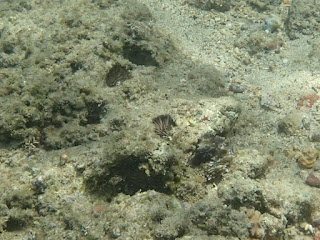 Click on the photo...the brown and white is the octopus.  You might be able to see the white lines radiating from its eye..
And tako #3: 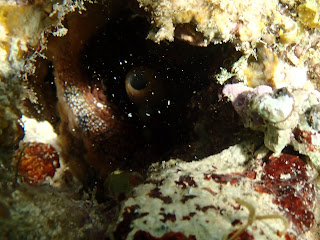 Remember, no one said octosnooping was easy! You can see a bit of its "leg" and the siphon...this one hid really well.  Interested in staying alive, I guess.  More power to you, oh amazing octopus!
Crab in a shell vs. Turban shell: you'll see the white operculum, guarding the animal inside the Turban shell...at least I hope so. I gave up waiting for the final act, so not sure which animal won out. I do know that crab looked pretty determined. 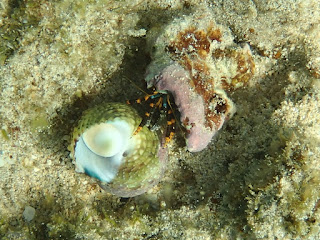 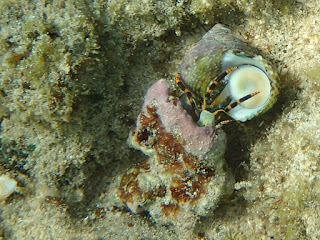 The operculum is like a trap door: holding the animal inside, protected. At least, I hope so.  I must say that I do see a lot of opercula not attached to a shell anymore, so I know that sometimes, something gets into the shell.... 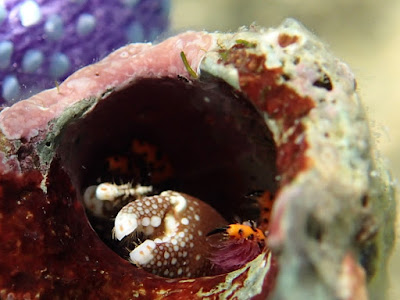 I do not know what crab this is....I see the orange of the Electric Blue Crab, but the brown and white almost look like a cowry shell! I am holding the outer shell in this case, because I picked it up to see if anything was inside...and there was something! 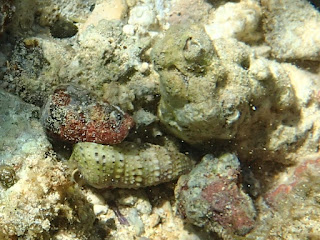 There were a lot of shells out and about today.  The photo above is a shell which I forget the name of but the one on top of is (maroon) is a Cone shell...not a shell to mess with. Again, I didn't hang around enough to see who won.  Hey! I only have 3 hours! And I swim slowly so I can see all these cool things, so time is pressing..
The piece of resistance (think of that with its French accent) and it is pea-ess, not piece like English! Anyway, found a big Leaf Fish.  Well, I say big, probably 5 inches long, which is BIG considering the others I've seen: 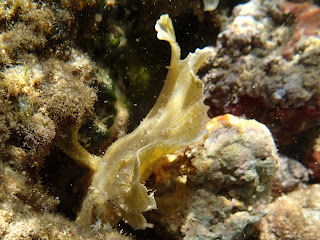 The tail is at the top of the photo.  You can see the fins/legs leaning on the rock. And if you look really closely, you can see the eye just above the bottom of the shot...It just held on, paying me absolutely no mind.....Unfortunately, the wave that smacked me around WAS paying attention to me, so I wasn't able to hang out for long..the water was really shallow at this point. I was just off the beach.  Just another reason to not walk around in the water.  I shall have to look it up, but I imagine this one has the poison/venom that others in the Scorpion Fish family have. I could be wrong..I'll let you know, once I do.
And since they're a bit more unusual over here, at least in this pond, here's one of the Bluefin Trevally that swam past me: 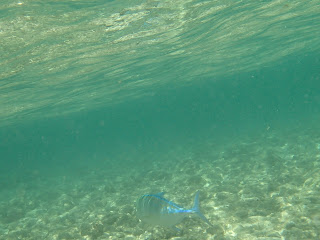 They are such pretty fish, but kinda low affect.  Unlike the octopus that reacts as soon as it sees you, the fish don't seem to care. 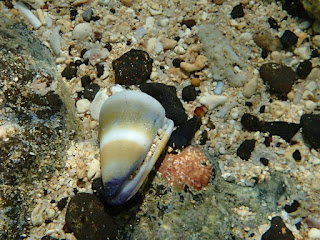 A wonderful snorkel...3 hours, 25 minutes. Then I had a quick pic of this Cone shell, obviously still alive, so I left it alone.  Got some pieces of another Cone shell, but it was easy to tell it wasn't inhabited, so I felt ok about snagging it. 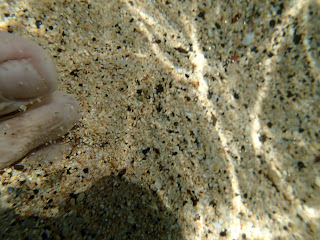 Then I had to get out, as my toes were getting prune-y!