I'm always kinda sad when I have to report that I didn't see any octopuses in my swim...but I do understand! By the time I get to the swimming hole after church, it's 11:30.  And many more people are present in the water, mucking things about. So any smart octopus would get out of the way!

But I did enjoy the swim anyway. Especially since I saw my fave collectible in one of my fave shells: Turban shell and its operculum. (Of course, I didn't collect this one, since it was still in use.) 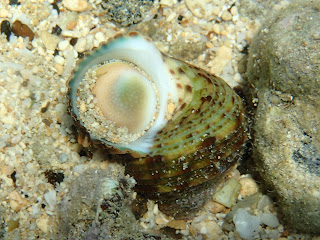 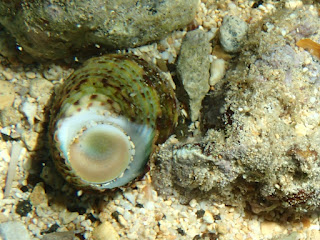 Same shell, I think...and same operculum ;) The thing in the middle snaps shut like a door whenever someone tries to invade the shell.  A life affirming action, because I think it keeps many predators out. At least, I hope so.
I also collected several opercula that were lying on the bottom, just rolling around with the waves. Maybe 35 or so. I asked myself: if I am finding all these opercula, why aren't I finding the broken shell, too? I don't know if they can reproduce another operculum, so can't tell ya. I do wonder. 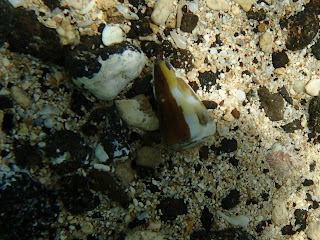 I'm more careful around these Cone shells.  Not that I pick shells up if they are in use.  At least, not usually. But the cone has a potent poison, so I tend to admire them but from a distance. 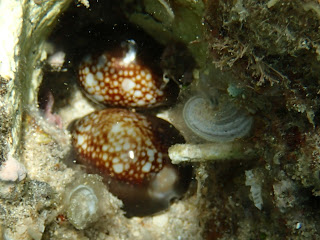 These 2 cowries were snuggled all up in a hole in the reef.  I've seen this quite a few times now and still enjoy it. Makes me think of school kids all bundled up for their afternoon nap. Not really sure why they do it, but protection seems like one option. As far as I know, Cowry Shells are not cannibals.  But I don't know too far!
OK, that's it for the shell portion of this post.  I do enjoy them very much, and took several broken bits home with me. If they're broken, it's easier to tell that they aren't in use. My criteria for bringing them home... 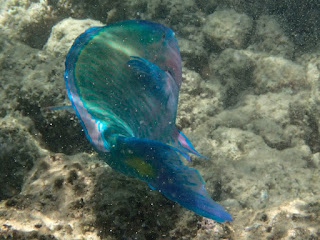 Lovely colors! Bright blue, pink and even some green.  Beware though: if you eat 'em, you gotta make sure they aren't carrying ciguaterra. Not sure what that test involves, but words to the wise.
Also, when in the water, please try to avoid walking on the bottom. You've heard me complain about this before, but really, would you want to step on this lovely flounder? 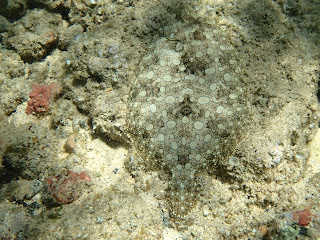 Or this leaf fish for that matter... 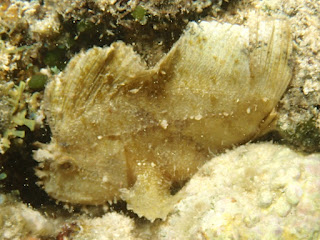 I don't know if they have the poison spines that their cousins the Scorpion Fish have, but would you want to be the one to find out?
Lizard Fish for Alex: 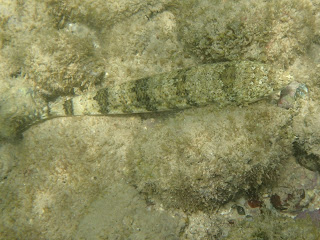 And since I search for octopuses, I look into holes.  I was surprised to see this hiding Humu: 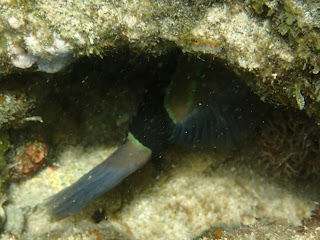 They do this sometimes, if they are feeling threatened.  I certainly didn't threaten it, so not sure why it hid. The spine on the top of its head supposedly makes it hard to pull out of a hole. Not that I have tried. Nor would I.
And something I'm not sure I've ever seen before: I can only suppose it's a starfish: 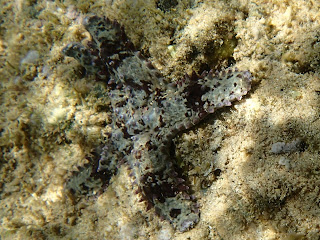 Last shot at the beach was the seal, taking, don't faint!, a nap! 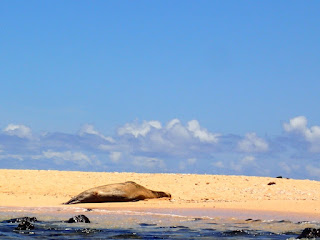 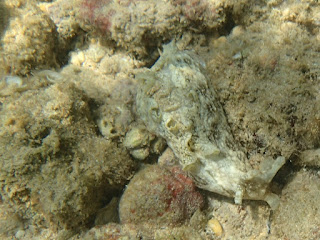 OK, not the last.  but this one is, really.  I had to report finding a Juliana's Sea Hare. My co-worker of the same name was less than thrilled that this ugly creature had her name.  I think they are pretty fascinating.
And I got out earlier this morning to take out the trash and found these: 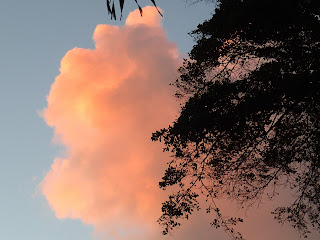 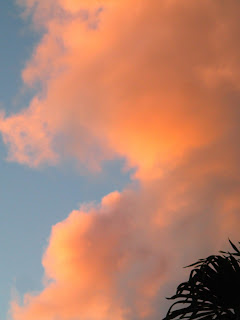 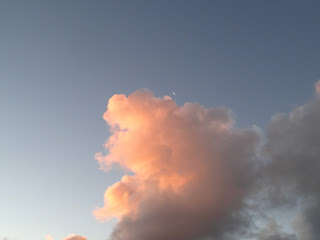 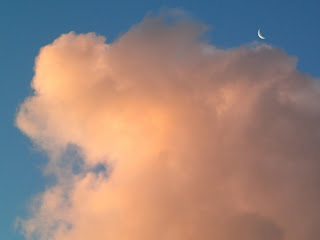 Cloud and a moon.  Perfect. And they were just floating there, waiting for me to come outside.
Last but certainly not least, is the female trunk fish. Oh so cute. 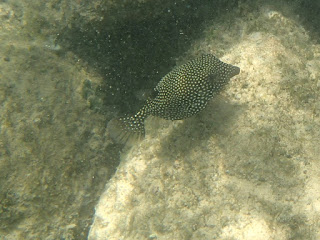