Octopus, shells and pencils..oh my!

Yesterday had a lot of fun stuff, as you see in the title of this post. 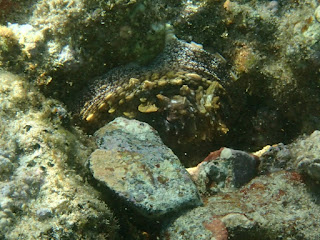 This octopus was the same one the lady stepped around for me. Its "shoulders" were up on the back of its den.  It had placed some rocks near its hole, so it was easier to spot: both a good thing and a bad thing. Those of us that look for tako can find the den by the rocks. The bad part is that some people eat the poor things. Bad, bad people! In some locales, you can tell where the octopus is by the empty shells outside its den. Maybe in my area, the shells are carried away by the waves. Speaking of waves: 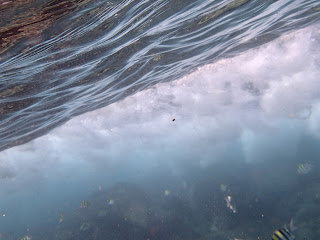 Really enjoy seeing the waves like this.  And the "rock" on the top
in the left corner aren't really rocks: it's the reflection of the rocks below in the water.
Pencil urchin: 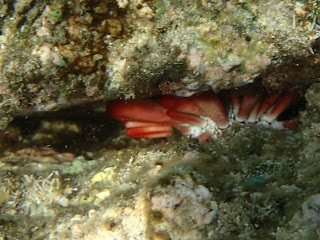 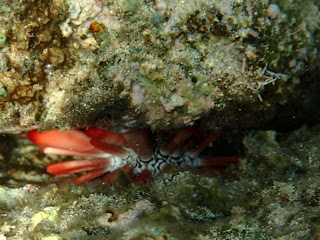 Light really helps.  It is somewhat tough to get these shots, especially when the waves are moving you about. Terrestrial photos much easier. 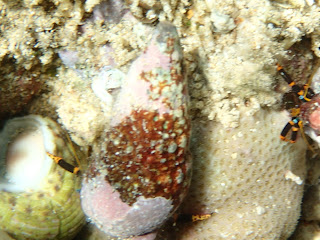 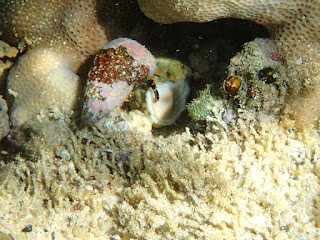 What you are seeing is two Electric Blue Crabs trying to get into a Turban Shell. Luckily for the Turban Shell, its operculum is intact and acting like a shut door. I didn't stay around to see what happened...takes a while. My time is limited. Well, in this case, limited to 3.5 hours. HA. 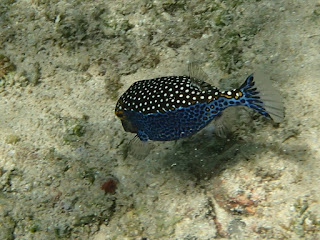 Male Trunk Fish. We call 'em box fish.  They have a hard bony body underneath that pretty blue skin with all the dots. And bulgy eyes. 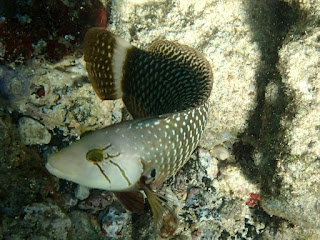 No swim is complete without my octo-finder, the Rock Mover Wrasse.The jaws of this fish are incredibly strong, as they pick up rocks and search underneath for food. 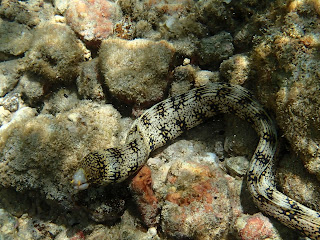 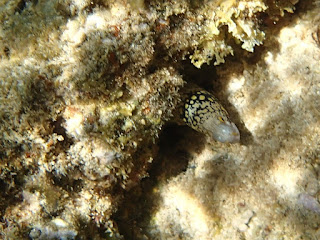 Snowflake moray eel.  They have rounded teeth.  Still wouldn't want one to bite me. 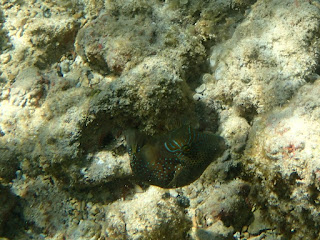 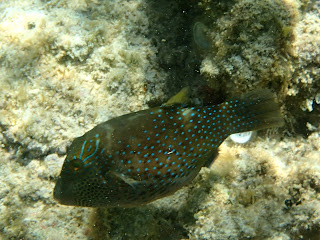 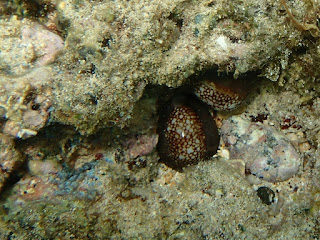 Some cowry shells snuggled up under a ledge for protection. Or privacy. Who knows?
Barred File Fish eating something on coral. 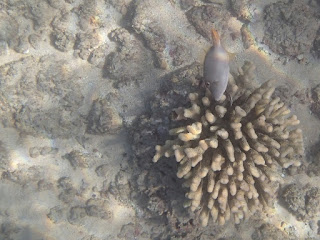 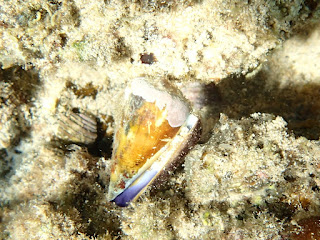 This cone shell was above the coral...it fell a bit when I sneaked a finger in to pick up some Turban Shell pieces. Then two bluefin trevally swimming together: 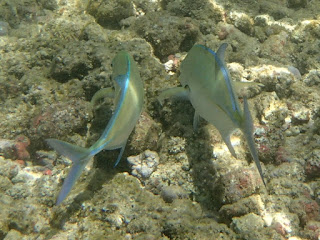 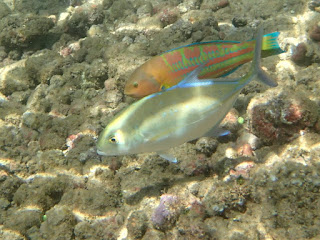 And a Christmas Wrasse joined the search party. 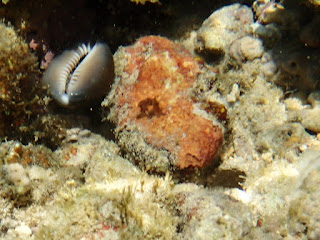 You cannot tell well in this photo, but the Cowry shell that's on its back was about to be attacked by a hermit crab in the orange-covered shell. Another Cowry shell nearby felt empty, so I picked it up and took it home. Unfortunately, when I unpacked my findings later, it was not empty but alive, and clinging to some other ocean bits.  So I went to my car, with the shell in water, and drove to Ahukini Landing.  A little boy and his brother were there...I asked the bigger boy to throw the shell into the water for me. He did.  We were all happy. I would have felt bad if the shell died because of my shell picking. Only broken shells from now on, unless I can tell it's truly empty. 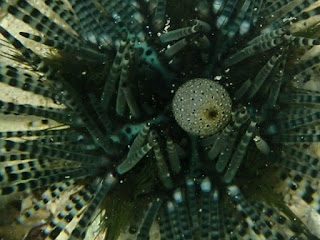 Haven't had the chance to catch a photo of this for a while. It's an urchin with its waste sac showing. Pretty, but not good to touch!
And always happy to see a flounder: 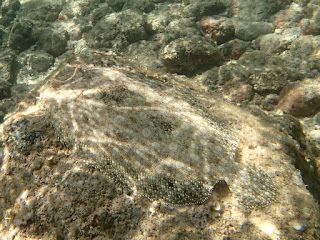 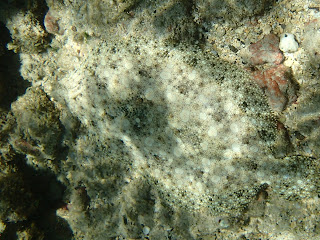 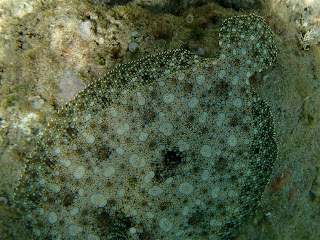 Movement is the key: if this one hadn't moved from its initial position, I doubt I would have seen it.

To finish this post, imagine the lovely smell of these Plumeria trees. It was wonderful. And palm trees for my sweetheart. You can also just see the Lifeguard tower...I took them some cranberry/walnut scones. He said: You baked these yourself?! Bien sur! 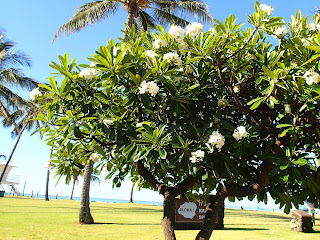