As with any decorating, there should be a centerpiece, a focal point that brings it all together.

For me, no big surprise, it's the presence of at least one octopus. But no joy yesterday after church; my pal said maybe there were too many people in the water.  Or perhaps by noon or 1, they are worried about getting sunburned. LOL.  Of course, they are usually hiding, so that's not a real worry.  (But now I'm thinking about that...since they do have skin, surely they could get burned by the sun?)

So that said, we start the post today with a photo of what NOT to do: 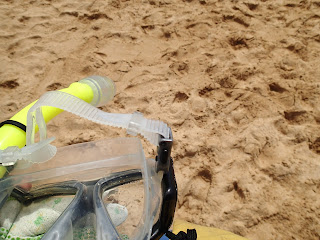 Don't throw your gear in the sand! Yes, this rookie move happened as I was trying to get ready to get in.  Someone had moved my bag of towel and slippers last week (can you believe?!), so I am becoming really minimalist about what I leave at the beach.

Luckily then, the bag also had just a towel and a pair of slippers.  We had heard that people are stealing stuff from cars and beach bags...one leaves the keys in the beach bag on the beach, goes snorkeling, only to find that someone has gotten their keys, gotten into their cars and not only pilfered stuff, but received the data about where the person lives, etc.  I tell you: what is going on with people these days?

SO I have taken preventive measures..and so far, it works.  But do try to keep sand out of your gear. This seal didn't seem to care that it had sand on its skin.... 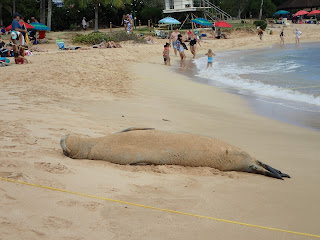 There were 2 seals, on separate beaches 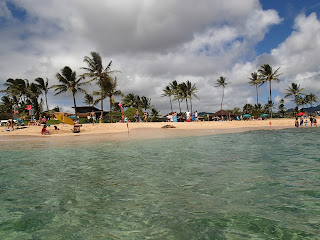 Yes, I know, it's too far away!  But I wanted you to be able to see what I see when I'm out in the water, looking to the beach.  Which I do, because I don't want to come in where the seal is.  I have never had one be aggressive to me, but I also steer clear of them, as the lifeguards suggest.

I was treated to a Pinktail Durgon yesterday.  Always a nice surprise, as I don't see many of them at this beach: 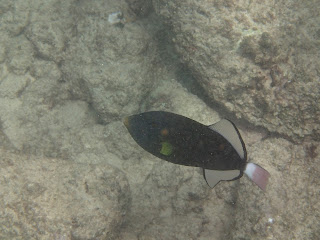 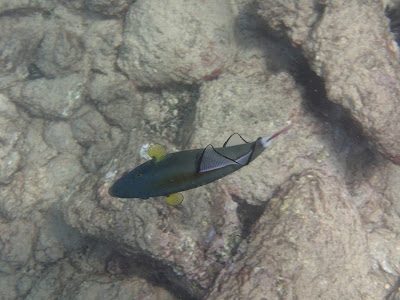 In the photo just above, you can see the yellow side fins.  I really love the tail fins, too, clear with black edging. This fish is quite shy and will swim away when approached.

A 3 spot damsel was guarding the coral head: 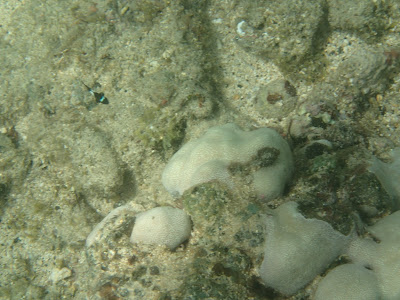 That's it, on the upper left.  I do admire how feisty they are in protecting their coral: whatever shape it is in. 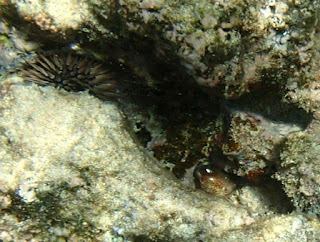 They are so shiny and pretty.  And smart to hide! 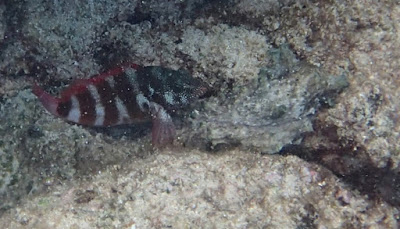 Not sure if the striped hawk fish was trying to hitch a ride or what, but the sea hare is under the fish...Hubby said perhaps there were 2 sea hares.  Cannot tell.  I do know that the Sea Hares are not the prettiest in the bunch..

Related, apparently, to the slug family. 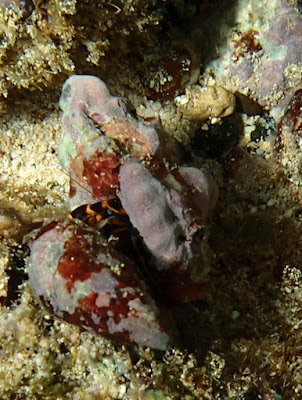 See the little orange legs? I couldn't tell how many crabs were involved, or if this one was simply transferring from one house to another... 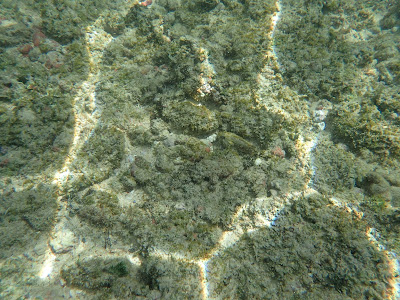 OK, what do you see?  Besides the light making a nice pattern.  OK, a clue: it's in the middle of the shot.  Sort of. 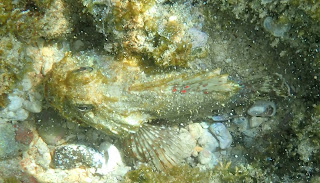 Does the shot above make it easier?  Yes, it's the Spotfin Scorpion Fish. With the face only a mother could love.  But still potent with poison. 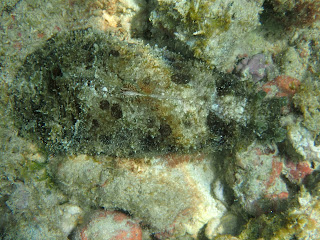 A Sea Hare of a different kind...couldn't find one in the book that looked like this.  But click on it: see the line that runs along the top of the body?  What is that for?!

It was a treat to see a group of 4 Moorish Idols...small ones: 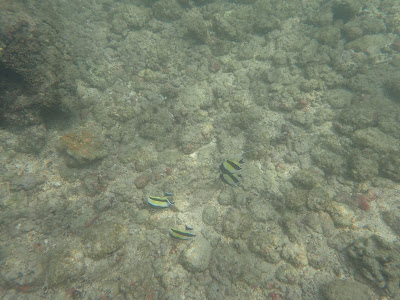 You can see the visibility wasn't great, so they brought some bright yellow to the scene. 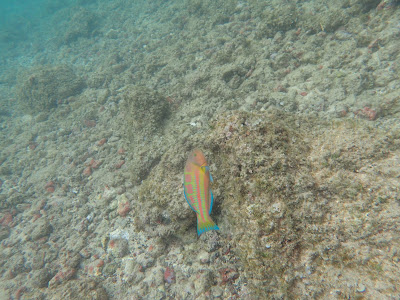 Doesn't this Christmas Wrasse look as if it's standing on its tail?
And a Hebrew Cone: 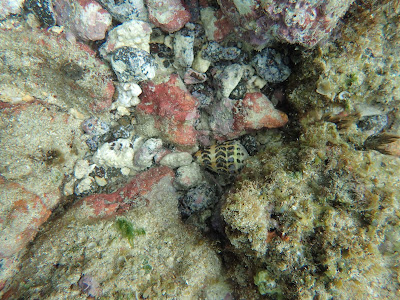 Supposedly, it's called that because the lines look like Hebrew script. For whatever reason, I like it for its clean coloring.


And lastly, the Trunk or Box Fish: 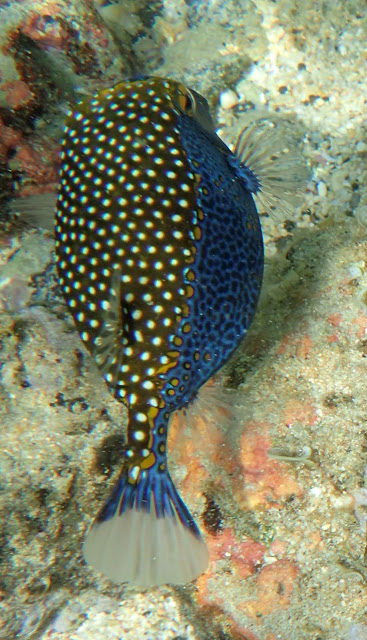 There you go, babe!