Who knew a rainy day would turn out great?

I was certainly surprised myself! I saw an octopus, a Hawaiian Green Lion Fish, a Leaf fish and all the usual suspects....even rain from underneath the waves.  And rainbows galore.
But the best part, and nothing against the other people who love to swim, but I adore really having the pond to myself.  Which I did for the most part today.  Wow.

Apparently, rain kept some people back in their condos.  Or perhaps it was the wind.  Neither of which kept me from the water.  Well, it WAS Saturday!  and now that I'm working, Sat and Sun are the only days where swimming is readily available.  And was I ready.

Seeing the octopus was funny too: I had more or less decided that if it was cloudy, there would be less light, so the odds of seeing my 8 legged friends declined today, in my mind.  But I just thought that and then looked around and there was an octopus, hiding in its hole: 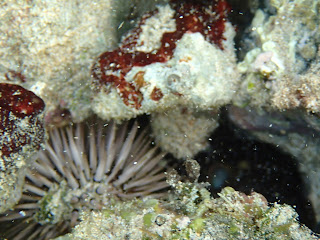 You can see his siphon open, just to the right of the urchin.
There were many Drupe shells out and about today.  Some came with crab: 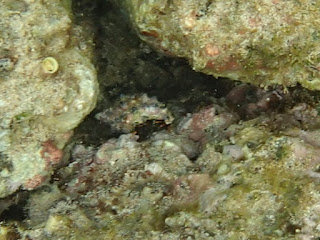 You have to look really close....it's under the lip of the drupe shell. 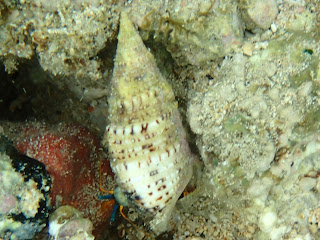 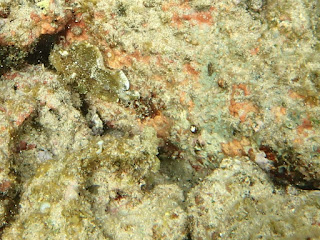 I think these fish are so cool! See it?! in the upper left of the photo, just below the crack in the rock.  They really are just like leaves: they move in the current, too. 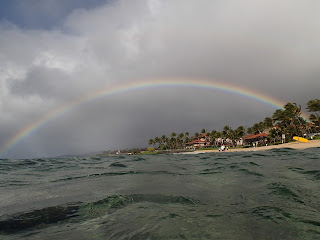 Rainbow, obviously, but with the water in front me in in the photo too.  There was a seal on the beach and one in the water when I walked down to get in... 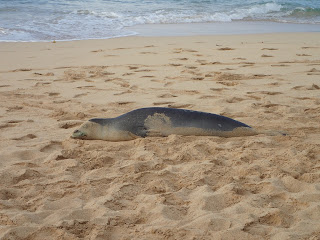 Taking a little snooze...well, perhaps a l-o-n-g snooze, since it was still snoozing when i got out, two and a half hours later.....they can sleep as long as they want.  let 'em have whatever peace they can find.

and this little dogey was swimming around outside in the big pond, which is why i didn't go there.  oh yeah, also the fact that no one was watching, so if I drowned, no one would care...or report it....or take a photo... one never knows. 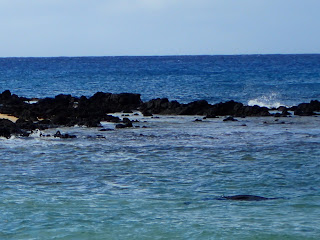 It's the long blob in the water.  And yes, I did check for a back fin.  No sense in being stupid, even if God does give me protection when I swim.  (And octopuses, but I digress..) 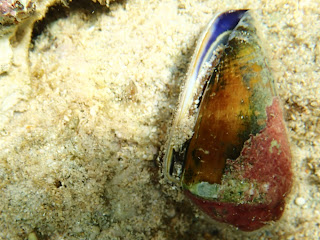 Nice colors inside.  Very smooth shell inside too. Outside, not so much.
Coral: 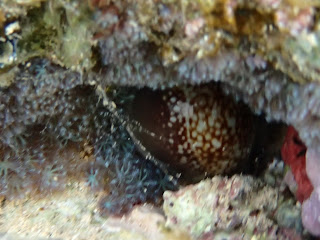 This cowry shell was nestled in with some blue coral.  I thought it was a pretty image.
Box fish for Alex: 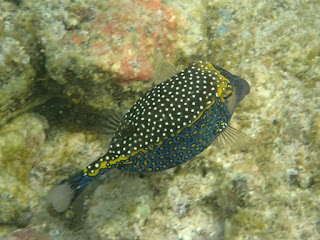 Nice little male.  They have amazing colors, but they are both shy, male and female..

A tiny humu looked at me with fear: 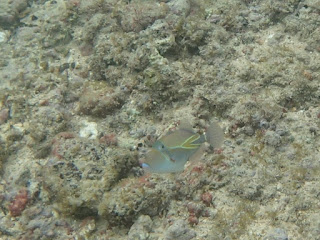 Or may be it was just telling me to go away. So many do... 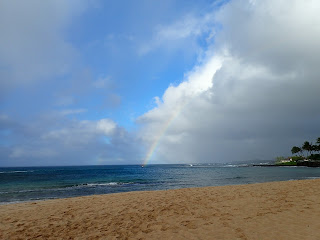 Another wonderful rainbow, swallowed up by the clouds..
And a pair of Moorish Idols.  Nose to tail: 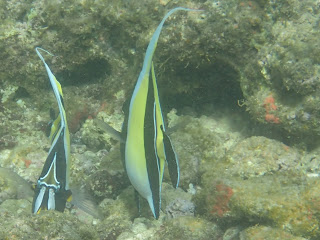 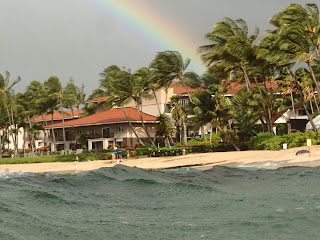 OK, you can see waves, rainbow and the seal, sleeping peacefully amidst the Keep Away signs.
Life is good.