Yeah, it's Kauai! So lovely vistas, great water and chickens.  Yeah, this Mom and her chicks heard me rustle the plastic bag that I saved from our time on Oahu and thought I was getting ready to feed them something.  Sorry, chicks! 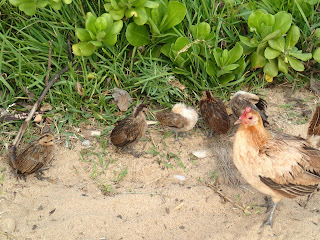 They were the definition of bird brain too....they just didn't get the idea that there was no food.  Even though I told them many times!  Perhaps they need to brush up on their English skills and learn to read brush-off body signals.  They did eventually go away in search of real food. (And before you feel badly for them, I saw a man feeding the chickens later.  I really think that God gives them all they need, what with the bugs, grains and centipedes on Kauai, but I guess they are going for easy eats.)
But yeah, once I got near the water, there were rewards a plenty.  First of all, the wind had died down, so the water was calmer.  Always a good thing!
Three octopuses.  Oh yeah.  Love that! 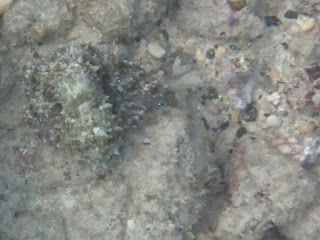 Got it?  This one had a sort of green coloration.  And it was way too deep to see really well.  But I'm always ecstatic when I see the first one.  And thankful, too. It relaxes the remainder of the dive.  I tell God that I'm thankful and also that one is enough.  Two is better, but one is enough. LOL.

This one I spotted because it was associated with an adult Rock Mover wrasse. 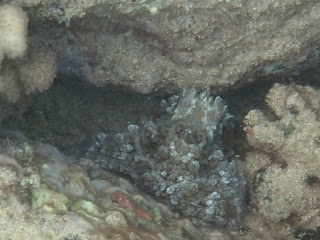 I love the bumps they can make. 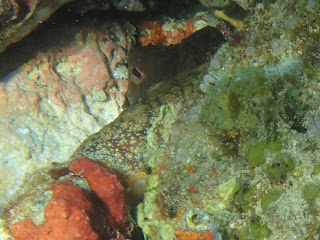 This octopus let me interact with him a bit...he kept looking up to see if I was still there.  Oh the fun we could have! If only. (Read a great book: Mark Batterson's IF...when you have time.)


I forgot to show you the rain just offshore.  Well, actually, not sure how far this rain was offshore. 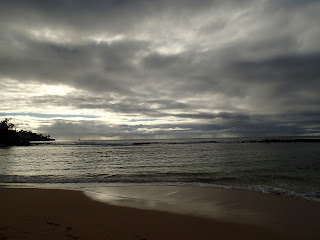 There are several places where the rain was coming down.  Thankfully, not over my head.
And for my sweetie, a small and very cute trunk fish: 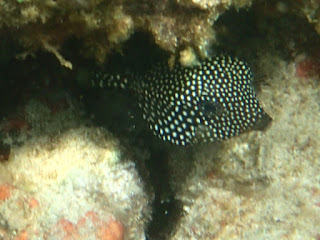 I snapped this shot, then got outa his way.  (Or her..) I didn't want to further spook this cute little guy.

I got quite a few pix of the pinktail durgon.  One of my fave fish. 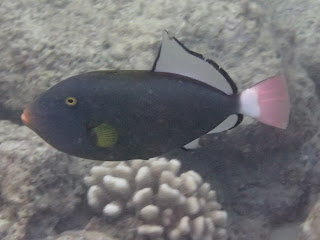 You can see how lovely this fish is.  You can also see how beat-up his top fin is!  Don't know if that is normal wear and tear, but I felt bad for it.  Didn't seem to slow it down any. I'll try to remember to put the video on here too...it's currently only on youtube.
And as I was filming the juvenile rock mover wrasse, another one, even smaller!, swam by: 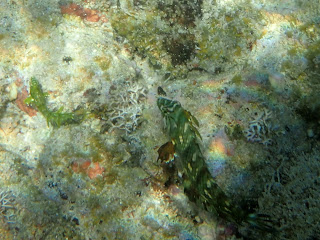 How cute are they?  And my hubby will be impressed...finally I'm getting over the Blue Only phase. HA More rock movers below. 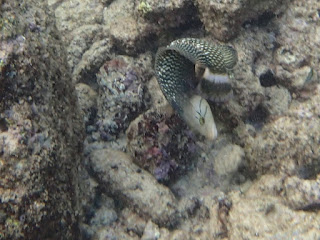 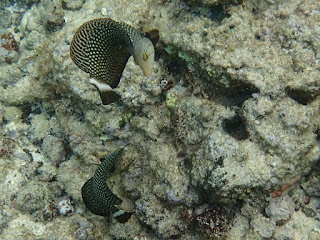 I have been seeing this pair for a while. Glad to see they're still jetting around.

And I love Brighteye Chromis, so thankful to catch a few on film. 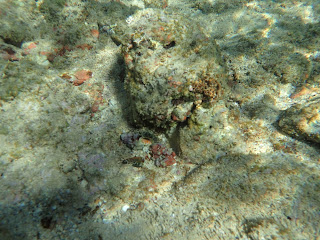 It's under the big rock in the middle.  No, I wouldn't lie..


And a flounder happened by!  Love those... 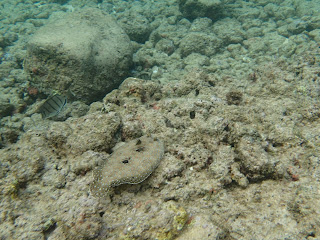 It flew, too, and I got that on video.
Later..
A couple of Spotfin Scorpion Fish, too.  This one was hiding in a hole in the rocks: 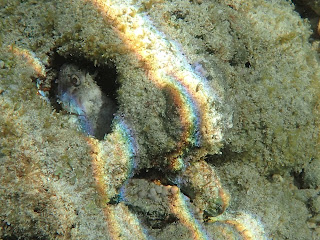 Good hiding place, right?
Well, I found it, but most people probably wouldn't.  The difference is that I expect to see them.  Other folks might not know about 'em.  If they did, they wouldn't walk around on the rocks. 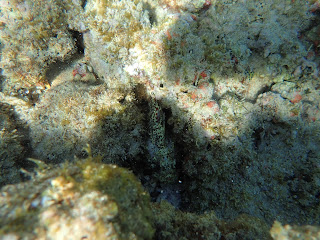 In the middle.  Click on the photo....
I also noted a group of fish, so I swam over.  Turns out it was a cleaning station, where Hawaiian Cleaner Wrasses (the purple and yellow fish) pick stuff out of the gills of other fish: 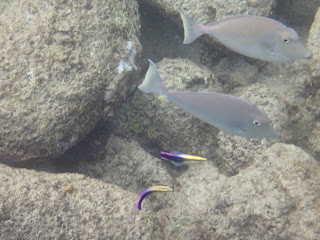 I thought it was cute: 2 cleaners and 2 unicorn fish.
And now, just for fun.  Recently ordered a pair of shot glasses.  They came from CHINA via Iceland...who knew?! 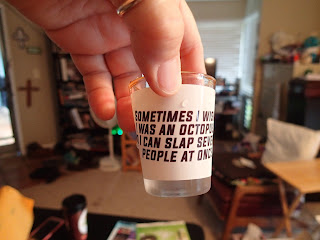 I do have days like this...when I wish I was an octopus with 8 arms, so I could slap several people at once...like the idiots who insisted they weren't chasing the turtle...they were just following it. 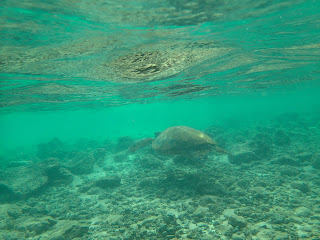 I resisted blasting them and swam away, after delivering the news that they shouldn't "follow" the turtle.

Oh yeah and one more of the juvenile rock mover wrasse.  Can't resist: 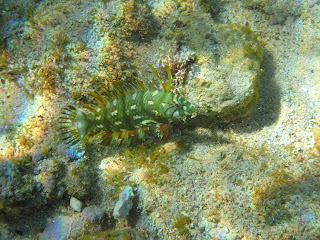 C'mon, isn't that a great pattern?  Note the "antlers" too.  God is the best.  Creations galore! Enjoy them.  One never knows how much time is left...
Oops almost forgot the lizard fish for Alex: 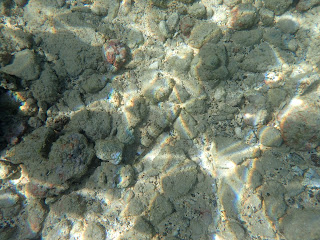