The octopuses were back! 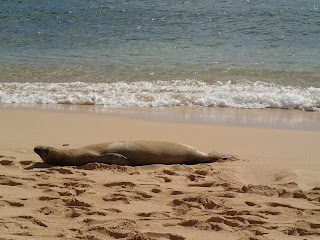 Nothing like starting off the day with a sleeping seal.  This one was on his back, just soaking up the sun.  About 3 yards away was the other one.  Yesterday, they had both been pretty cozy.  The seal volunteer said there's no explaining what will upset a seal...cozy one day, totally separated the next. We just let 'em sleep.. 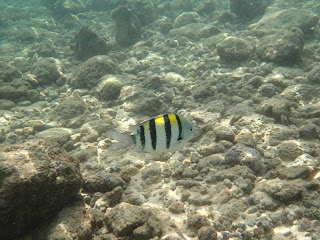 this little guy was in a group of his kind, just sliding along 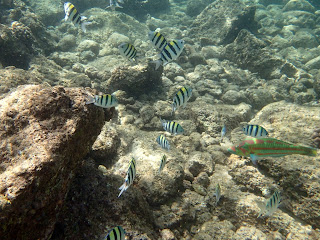 The female Christmas Wrasse looks as if she doesn't belong.  She didn't seem to mind.
And a pretty rare find: a goby: 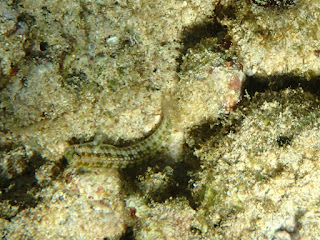 I like these little guys, because they are fast and just dart out for a bite, then back into their holes.  Cute.  And plaid. 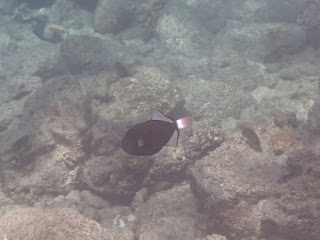 I do love the Pinktail Durgon.  They are very shy and will swim away if they see me.  But this one was just a little bit late.  This is a cropped photo, so I wasn't as close as it appears....
The first of two octopuses.  At first, I doubted that it was another one: one has to be careful.  They can move and make me think it's another one.  This is the first one: Hiding at the bottom of the rock.
And #2: 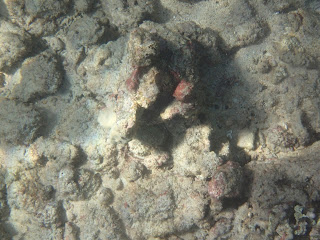 I agree, very hard to see.  The brown part, below and to the left of the red rock.  I am hopeful that one day I'll be able to see one out and about again.  Perhaps hunting.  I want to see that, but don't want to swim at night!  For me, too scary.
Trunk fish: 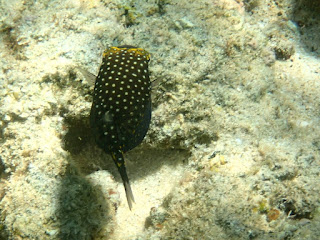 There were several Cowry shells.  I picked this one up, as it was upside down on the bottom, something that never happens when it's alive.  But I wasn't sure enough that it was empty, so I left it back on the ocean floor. 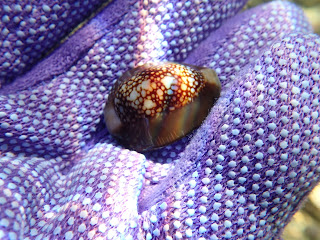 They are such pretty shells.  Shiny and smooth and well patterned.  I have one at home that's bigger than my fist. 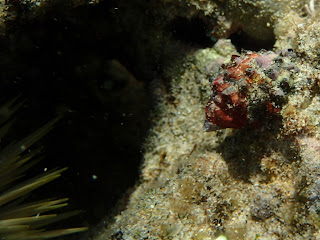 Plenty of urchins around, too.  Sometimes it seems they are the most prevalent thing... 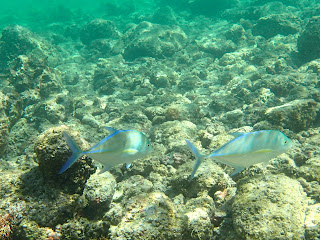 This pair of Bluefin Trevally strolled by.  I enjoyed the sunlight on their skins. 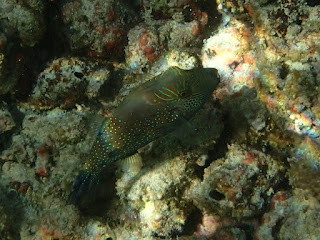 Nice pattern on the Ambon puffer, too.  The pretty blue fin on its underside has still eluded my camera, but someday I'll catch it. 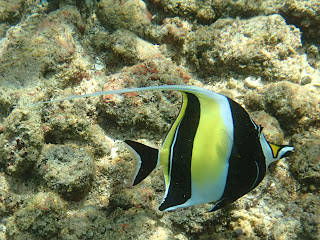 Moorish idols swam by too.  I do love the long white thread that swirls behind them. And it seems as if they have eyelashes, too.  Look! 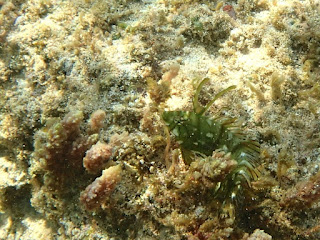 Pretty, quick and bendy enough to hide among the seaweed.
This tiny humu tried to escape my camera 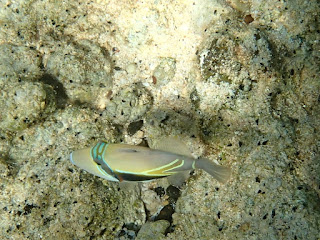 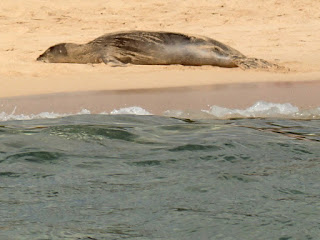 This is the other one, a distance away from seal #1.  Glad I got a chance to get back into the water. Don't want to start the week without an octo-viewing.