I probably will never say that I am taking the natural beauty of Kauai for granted. But sometimes, especially today when the waves and clouds seemed even more breathtaking, I really especially notice how lovely it all is! 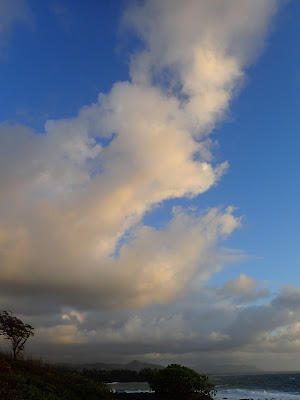 As you can see, still trying to get the immensity of the clouds caught in a picture.  This photo has the clouds, and the far off mountains of Kapaa and some of the wave action.  I am incredibly thankful that the storms mostly missed us.  They did bring in some waves, though. 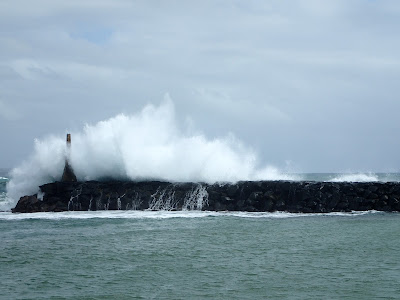 We couldn't run out to see how high the post is that's being covered by this wave, but probably 12 feet, if I had to guess. 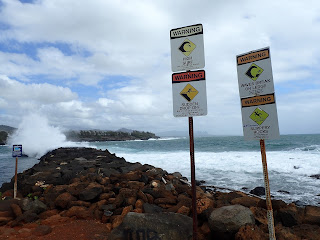 We did pay attention (and I would ask you to, when you visit Kauai) to the warning signs.  You definitely do NOT want to be swept out to sea.  It seems very stupid, but every year folks think they are safe going out on the rocks near the ocean.  And every year a few people get killed by doing so.  God made the oceans and everything in it.  But please enjoy from the safe shoreline!!

Some of God's rays were captured: 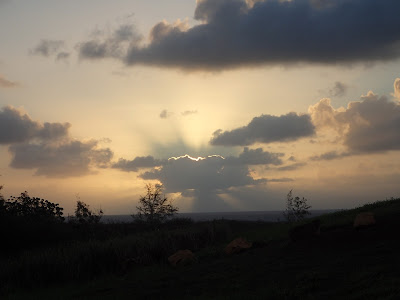 Yeeha!!!!  This was SO worth driving out on Ahukini Landing to capture...No phone lines, so it was easier to get the full impact of the clouds, trees and light. Really, people: it IS worth getting up early for.

And ultimately, the real sunrise: 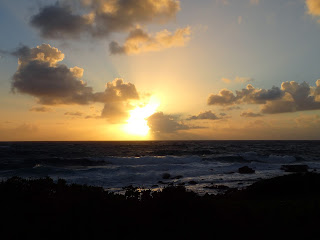 Even some sun on the waves.  There were multiple sets.  NO ONE was dumb enough to be surfing out here.  With rocks, and close together sets, it would have been stupid.  (God gives us good brains; so we should use them.) 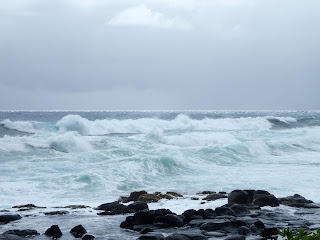 See how the sets of waves were very close to each other?  not great place to surf...

There was a set of 3 turtles.  Unfortunately, they were too quick for me to catch any photo other than a brown splotch in the water....But it was nice to know that I don't have to drive to Poipu to see them near my friend's house.  Although I like that drive.  Perhaps next week. My shoulder is doing better and I can hardly wait to see the Poipu beach to see what the waves they are probably getting has done to the coastline. 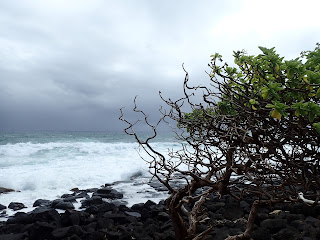 This one shows not only the tree, but waves and the rain out at sea.  The weather is getting ready for Hurricane Lester. In this case, we are northerly from the other islands, so we will be the last in the Hawaiian chain to get the brunt of the Lester forces.  I am very hopeful that we'll get some wind and rain, but nothing major.  God is good!

And since I went into full hurricane mode, here's my snack: 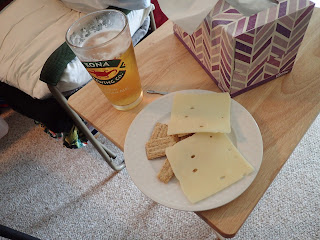 Swiss cheese, Triscuits and Foster's beer!  Lunch of champions.  I must admit that sometimes I enjoy a glass of beer or wine.  We even do an occasional toast in Jagermeister.  I learned about the latter years ago from my hubby's friend, Pete, who told us about it for a stomach ache solution.  Not sure there's really anything medicinal about it, but it does seem to ease any stomach ache.  I think maybe there are herbs in it.  Or maybe it fuzzes you just enough that you don't feel the ache!
Had a job interview for a job that seems like a good one....please pray for God's will on that for me, eh?! And thanks.

One other note:  I have a postcard collection of over 6,000 cards. Yeah, crazy, I know.  Some are cards that people have written to me, but probably more than half are unwritten, "available" cards.  If you have a shut-in or military person who would like to receive a card, please comment and send me their name and address.  I can send a few out... And thanks for reading.  Tell your friends...